The president’s trip to Scranton, Pa., comes as Democrats close in on a deal to advance two bills carrying a scaled-back version of his domestic policy priorities.

WASHINGTON — As he tries to steer his party toward a vast, once-in-a-generation investment in social programs, President Biden is paring back his ambitions for clean energy, access to college and help for families.

The president proposed abandoning his signature campaign promise of two years of free community college, according to people who attended White House meetings with Democratic lawmakers and others who had been briefed on them. He conceded that negotiators would dump a clean electricity program spurned by Senate centrists. He raised the idea of limiting an extension of payments to families with children to one year. And he said the length of federal paid leave could shrink.

In response to steadfast opposition from Senator Kyrsten Sinema, Democrat of Arizona, Mr. Biden’s team is now also wrestling with how to pay for trillions of dollars in spending without relying on increases in the corporate or individual income tax rates.

Pursuing a legacy-making achievement, Mr. Biden has been a mediator, a listener and at times an exasperated negotiator, according to people familiar with the dozens of closed-door discussions, Zoom meetings and many late-night telephone calls with Democratic lawmakers.

For the president — the man in the middle — the goal is to find a way to reach a deal, even if that feels like betrayal and broken promises to some on both sides.

In meetings with progressives, he has coaxed them away from expansive programs with sky-high price tags. With moderates, he has acknowledged their concerns about an overreaching government even as he has nudged them toward supporting trillions of dollars in new spending and tax cuts. And in public, he has pushed his original agenda while conceding it will be pared back.

Rep. Pramila Jayapal of Washington, the Democratic leader of House progressives, described the discussions as “conversational,” but said the president was moving to bring the debate to an end.

“He is the closer, he is the convincer, the mediator in chief,” she said.

But mostly, he has been the compromiser.

But he suggested to lawmakers on Tuesday that the price tag for his agenda could drop by 50 percent, to $1.75 trillion. And speaking at the Electric City Trolley Museum in Scranton, Pa., on Wednesday afternoon, he tacitly acknowledged how far his ambitions have been scaled back.

“We’re going to make investments in education beyond high school that includes increasing Pell Grants,” he told the audience in the town where he grew up. He did not mention free community college.

After months of plodding discussions, there is a new sense of urgency and optimism at the White House and among Democrats on Capitol Hill. Drawing on decades of experience as a senator, Mr. Biden has maintained disciplined patience with members of his own party, according to people familiar with the talks. He has not expressed deeply held views on the details or drawn many red lines.

A final framework for the legislation has yet to emerge, even as discussions accelerate. But the negotiations over Mr. Biden’s social policy agenda, known as Build Back Better, are revealing him to be the flexible dealmaker that some hoped for — and others dreaded.

Reaching compromise, even on a pared-back version of Mr. Biden’s agenda, would dramatically increase the federal government’s spending on a wide array of social programs, helping families, college students, middle-class workers and others for decades. 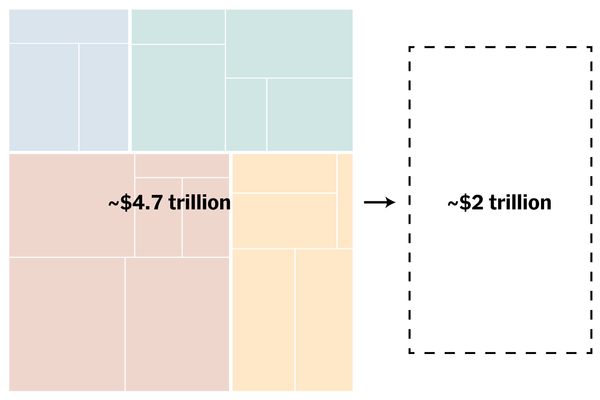 The Democrats Have a Lot of Cutting to Do

Detailed estimates show the budget bill was even bigger than first thought, which makes getting it below $2 trillion that much tougher.

Details of legislation that would spend roughly $2 trillion over 10 years remained in flux on Wednesday, as lawmakers huddled across Capitol Hill to iron out the details of the plan. An agreement on that bill could in turn bring progressives in the House to vote for a separate bill to invest in roads, bridges, broadband, water pipes and other physical infrastructure, which has already cleared the Senate with bipartisan support.

But compromise has its costs, especially for a politician eager to talk about revolutionary change, but perfectly willing to accept incremental progress.

For environmental activists, immigration advocates, proponents of expanded access to college and others, Mr. Biden’s search for middle ground is likely to mean giving up on some of the sweeping proposals they hoped would finally pass in a government controlled by Democrats. That has left many of them angry and frustrated.

Outside the White House on Wednesday, five young climate change activists began a hunger strike to protest what they described as Mr. Biden’s capitulation to demands to back away from ambitious clean energy plans.

“I think we all feel pretty desperate,” said Abby Leedy, 20, who had traveled from Philadelphia.

She said young people, many of whom went door-to-door to help elect Mr. Biden, are now disappointed in him.

“A lot of young people worked hard to elect Joe Biden because he did make promises. He said that he would be a climate champion, that if we elected him he would do everything he could to solve the climate crisis,” Ms. Leedy said. “I think what’s happening right now is he’s going back on his climate promises.”

Mr. Biden’s top advisers are betting that the anger and frustration felt by those who do not get everything they want will quickly fade. Aides said they expect Democratic lawmakers — progressives and moderates alike — and activists to embrace the compromise legislation once it passes.

To that end, Mr. Biden has been acting as a cheerleader, a sounding board and, increasingly, a prod for holdout Democrats, spending hours in the Oval Office and its adjoining private dining room, meeting with key lawmakers and cajoling others on the phone.

In his meetings with lawmakers, Mr. Biden has stressed the political peril he and his party face if his agenda falls flat in Congress. He frequently extols the potential benefits to American workers and families, and opinion polls suggest strong nationwide popularity for his spending and tax plans. He has pushed for lawmakers’ support but not threatened to break off talks.

Mr. Biden’s efforts have been hampered, some administration officials concede privately, by his own falling poll numbers, which slumped this summer as the United States suffered another wave of Covid-19 infections and deaths and the administration staged a chaotic troop withdrawal from Afghanistan.

Some Democrats complain that the president’s intense focus on Ms. Sinema and Senator Joe Manchin III, Democrat of West Virginia, has diverted his attention from the rest of his coalition and made it harder for him to bring progressives on board.

In order to maneuver around unanimous Republican opposition, Democrats are using a fast-track budget process known as reconciliation that shields legislation from a filibuster. But to cobble together a majority for passage with their razor-thin majorities, they must keep all 50 of their senators and nearly every House Democrat united behind a final product — a perilous maneuver when priorities are quickly being whittled down.

One of the most fraught unresolved elements of the legislation is how to finance the bill. Mr. Biden did not focus on that in discussions with lawmakers on Tuesday.

While talks remain ongoing in a bid to sway Ms. Sinema, who met privately with White House staff on Wednesday, Democrats are now eyeing another array of finance mechanisms, including increasing the Internal Revenue Service’s ability to collect unpaid taxes, taxing stock buybacks, imposing an income tax on billionaire wealth and increasing the global minimum tax rate as a way to pay for the package.

Democratic leaders met privately on Wednesday with the leaders of the tax-writing committees, Senator Ron Wyden of Oregon and Representative Richard E. Neal of Massachusetts, as well as White House staff.

During his visit to Scranton, Mr. Biden

did not dwell on the size of the social legislation. And he insisted that once approved, the spending will help families raise and educate their children and keep the United States competitive.

“For too long, working people in this nation, the middle class in this country, the backbone of the country have been dealt out,” he said. “It’s time to deal them back in.”

Across Capitol Hill on Wednesday, different groups of lawmakers — from Senate committee leaders to ideological caucuses in the House — were huddling to negotiate a possible compromise.

“Members are in a position where they want to get something done — they understand that you’ve got to get everybody in the tent, because we have very close margins,” Representative Steny H. Hoyer of Maryland, the majority leader, told reporters when asked about the smaller spending proposal. “So I think they’ll accommodate that.”

Leaving a private caucus meeting Wednesday morning, some Democrats appeared most concerned about the prospect of limiting the duration of the expanded child tax credit to just one more year. Democrats had hoped to extend the monthly payments through 2024 or 2025.

“I think it’s a big mistake — one year extension is a big mistake,” Representative Rosa DeLauro, Democrat of Connecticut and a champion of the proposal, said Wednesday morning. “And I think it’s not good, not good for the country, what I will do is to continue to pressure for a new framework that’s more enduring for children and for families.”