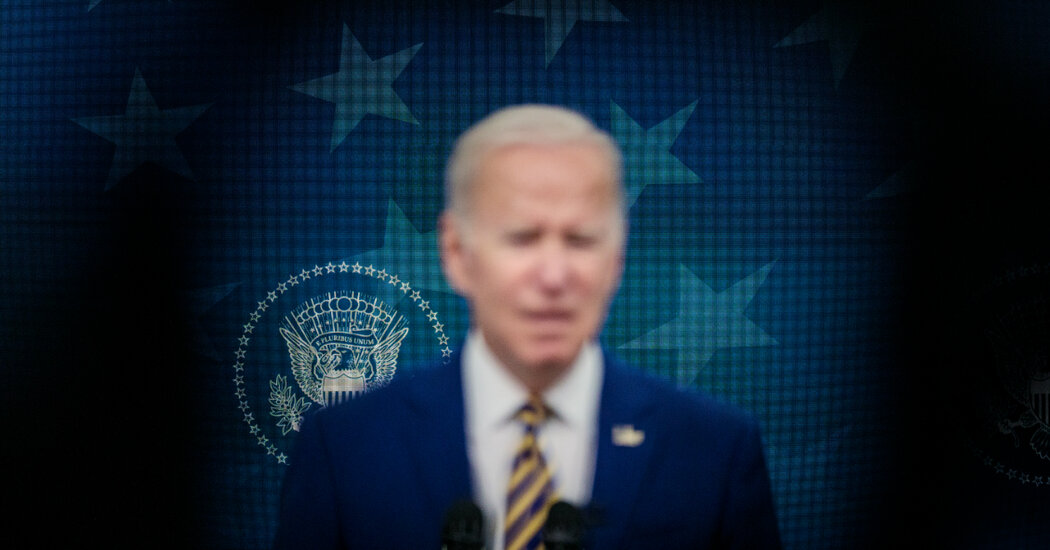 Americans, including many of the people who voted for him, are not happy with him. They want him to be something different, to be someone different.

Some may think that these Americans misjudged the man they sent to the White House. I don’t share that view.

America didn’t misjudge Joe Biden. As president, he has been exactly who he said he’d be. But America did misjudge the kind of leader it wanted in this moment.

Last year, most Democrats had a single goal: to get rid of Donald Trump. He was degrading the country and possibly destroying it.

We were all living in a vortex of chaos. Every morning we rose to a fresh hell. What had he done and said today? How much more of this could we take? It felt at times like we were trapped in an abusive relationship. We just wanted out. We wanted relief.

Biden seemed, to many, to be the man who could provide it, the man who could loosen Trump’s stranglehold on our society. Democrats were afraid to take too much of a chance with their nominee. Wanting too much, let alone demanding it, felt dangerous.

So we settled on the elder statesman. The straight white man. The middle-of-the-roader: not too hot, not too cold, lukewarm.

He was the “scrappy kid from Scranton,” the unapologetic “union man” who could win back the pixies of politics: the working-class white voters who could back Barack Obama in one election and Trump in the next.

Biden pitched electability — moderation rather than transformation — and voters liked it.

When he took office, Representative Lisa Blunt Rochester of Delaware, who had chaired his campaign, told The Times that the president was projecting a sense of “calm resolve.”

Calm resolve may well be the working mantra of the Biden administration — and there have been successes and positive news under Biden — but Americans are now dealing with a virus that won’t go away, rising inflation, progressive legislation that is either stalled (like the Build Back Better bill) or abandoned (like Senator Cory Booker’s federal police reform bill).

A Congressional committee is looking into the Jan. 6 insurrection and prosecutors around the country are looking into Trump, his campaign, his family and his companies, but he has yet to be held accountable for his multiple transgressions and is likely to run again in 2024.

The Biden administration needs a pinch of cayenne.

They thought that if they just kept their heads down and did the work, they would be rewarded. But that’s not the way the world works anymore, not in this moment, not after Trump.

If you put a megaphone down, someone else will pick it up. Silence creates a void aching to be filled.

As Politico reported in October, Biden had participated in just 10 one-on-one interviews in the first nine months of his presidency.

The publication called it “a distinct feature of this White House,” noting that “At this point in their presidencies, Barack Obama had participated in 131 interviews and Donald Trump had participated in 57 (16 of which were within the friendly confines of Fox News).”

Biden wasn’t always so reticent. As Politico noted, he was far more outspoken as vice president, giving at least twice the number of interviews by his first October in office as he has while president, sometimes even visiting all three network morning shows in a single day.

Today, messaging from the White House often falls to the emissaries. But that is not enough.

There is a hardening perception that the president isn’t even being silently productive, but voiceless and vacant. A new poll from Morning Consult and Politico finds that a plurality of registered voters (42 percent) say that Biden has accomplished less than they expected. More than a quarter of Democrats felt this way.

Biden is being the president he campaigned to be. He is following that script to a T. But conditions on the ground have changed. What the American people want from their leader has changed. And Biden is going to have to change with them. He has to be the president America needs in December 2021, not the one it needed in December 2020.

Even with the real policy disappointments of the last few months, particularly around voting rights, Biden’s first year in office is far from a failure. But an alternate reality is growing in the minds of voters, and Biden himself is doing too little to squash it.

He needs to change the narrative, and the first step is to be more publicly present. Agreeing to an interview Wednesday with ABC’s David Muir was a start, but just one appearance won’t correct a season of shirking.