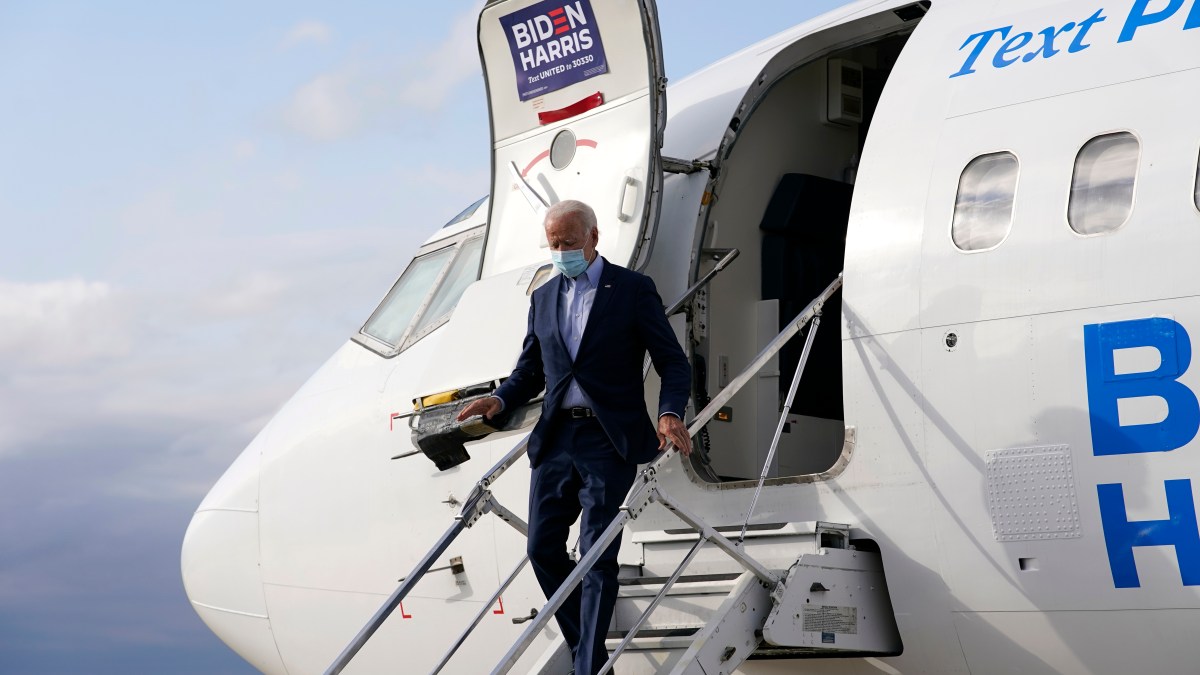 Joe Biden made two campaign stops Monday in Ohio, attempting to expand the battleground map and keep President Donald Trump on the defensive in a state long thought to be out of reach for Democrats after Trump’s wide margin of victory there four years ago.

The Democratic presidential nominee stressed an economic message and touted his own record while casting Trump as having abandoned working-class voters who helped him win Rust Belt states that put him in the White House in 2016. The president’s reelection campaign countered that few expected Trump to win Ohio so comfortably four years ago and that he would repeat a similar upset on Election Day.

In Toledo, Biden addressed United Auto Workers who represent a local General Motors’ powertrain plant. The former vice president spoke in a parking lot with about 30 American-made cars and trucks arrayed nearby, and he struck a decidedly populist note, praising unions and arguing that he represented working-class values while the Republican Trump cared only about impressing the Ivy League and country club set.

“The auto industry that supported 1 in 8 Ohioans was on the brink,” Biden said at the drive-in rally, eliciting horn honks from people listening from their vehicles. “Barack and I bet on you, and it paid off.”

Trump was resuming campaign travel for the first time since testing positive for the coronavirus, with a Florida rally. The president tweeted, “We have far more support and enthusiasm than even in 2016.” And Vice Present Mike Pence staged his own event in Ohio’s capital, Columbus, concluding remarks at Savko & Sons, an excavation company that hosted Obama at one of its job sites in 2010, shortly before Biden took the stage in Toledo.

“You said yes to President Donald Trump in 2016, and I know the Buckeye State’s going to say yes to four more years,” Pence told the crowd.

In a nod to Senate confirmation hearings on Amy Coney Barrett’s nomination to the Supreme Court — where Biden’s running mate, California Sen. Kamala Harris, was participating remotely — Pence declared to applause that “We’re going to fill that seat.”

He also noted that Biden has refused to say whether he will heed the calls of some progressive Democrats who would like to see the party expand the number of seats on the Supreme Court, should Democrats win the White House and the Senate on Nov. 3 while retaining control of the House.

“It could be nothing less than the biggest power grab in American history,” Pence said. “Joe Biden and Kamala Harris won’t tell the American people what they’re going to do.”

Biden has called for the late Justice Ruth Bader Ginsburg’s seat to remain vacant until after the election but hasn’t answered questions about whether he would be open to expanding the court. He says doing so would be playing politics by Trump’s rules.

Trump carried Ohio over Democrat Hillary Clinton by a comfortable 8 percentage points in 2016, but recent polls show this year’s presidential race tightening in the state.

The Biden campaign has increased advertising in Ohio lately, even as Trump has scaled back his efforts in the state and elsewhere. Biden’s perceived increases in support have largely come as the president has seen his backing slip in cities — but he is looking to cancel that out by further expanding his already strong support among voters in rural areas.

Biden argued that Trump has mishandled the coronavirus pandemic, exacerbating the resulting economic fallout. He said the Trump administration “squandered” the strong economy it inherited from the Obama White House four years ago, and he promised to create new, high-paying union jobs once the country gets the virus under control.

“He turned his back on you,” Biden said of Trump. “I promise you, I will never do that.”

Congresswoman Marcia Fudge said early and absentee voting numbers are already high in her district that includes Cleveland, a strong city for Democrats.

“I am seeing numbers that I can only dream of,” Fudge said.

The traveling press that accompanies Biden on campaign trips remained grounded in Delaware for hours on Monday, missing his event in Toledo because of mechanical problems on the aircraft it was assigned. Reporters use a separate plane than the candidate, a setup the campaign attributes to the coronavirus.

The Commission on Presidential Debates has canceled the presidential debate between President Donald Trump and Joe Biden scheduled for Oct. 15 in Miami, citing the campaigns making other plans.

The campaign eventually procured a new plane so the press pool could attend Biden’s rally later Monday in Cincinnati. There, Biden continued his focus on struggling Americans.

“They see the people at the top doing better and better even in the midst of this god-awful recession,” he said. “They’ve got to wonder: Who’s looking out for me? That’s Donald Trump’s presidency.”

Biden also seized on Trump’s coronavirus diagnosis, saying the president’s “reckless personal conduct since his diagnosis” has been “unconscionable.”

“The longer Donald Trump is president,” Biden added, “the more reckless he gets.”