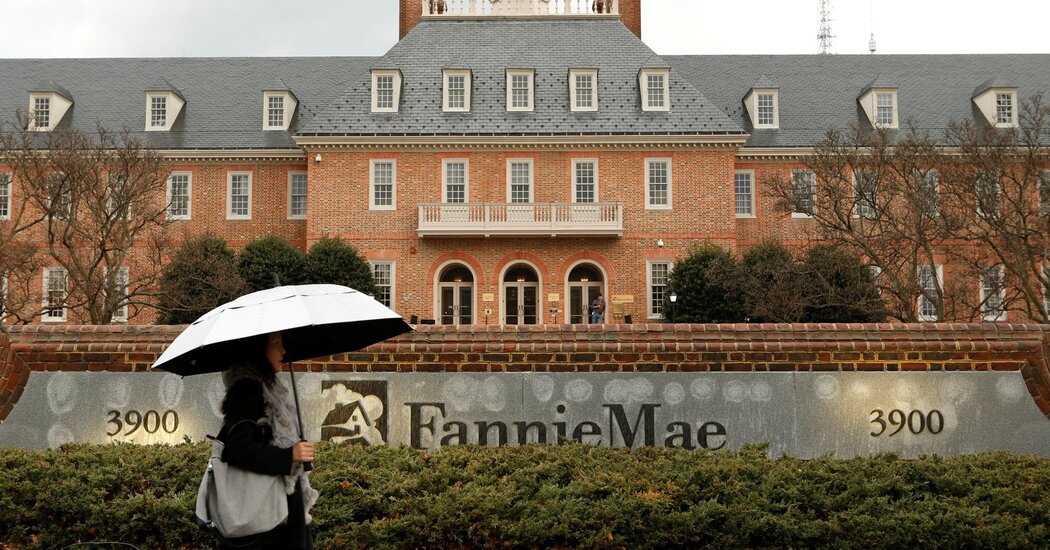 The case was brought by shareholders of Fannie Mae and Freddie Mac, who said the law that created the agency was unconstitutional.

WASHINGTON — President Biden on Wednesday removed the chief of the Federal Housing Finance Agency, which oversees the mortgage giants Fannie Mae and Freddie Mac, acting immediately after the Supreme Court ruled that the president had the authority to dismiss the agency’s director.

The director, Mark Calabria, who was appointed by President Donald J. Trump, issued a statement wishing his successor well and noting that he respected the decision of the court and the president’s authority to remove him. The White House said late Wednesday that it had designated Sandra L. Thompson, deputy director at the agency, as the acting chief.

Replacing Mr. Calabria gives Mr. Biden more control over the fate of the mortgage giants, which play an outsize role in the housing market and are central to many homeowners’ ability to afford homes. Fannie and Freddie do not make home loans but instead buy mortgages and package them into securities, providing a guarantee to make investors who buy those securities whole in case of default. That helps keep the cost of 30-year mortgages low.

During his tenure, Mr. Calabria had overseen the enactment of a number of rules that were seen as critical steps toward ending the federal government’s conservatorship of Fannie and Freddie, which was imposed in 2008 at the start of the financial crisis. Mr. Calabria has favored a move toward privatizing Fannie and Freddie and ending the conservatorship.

Many housing advocates and Democrats also favor ending it, but they do not necessarily want Fannie and Freddie put into private hands.

The Supreme Court ruling stemmed from a dispute between shareholders of Fannie Mae and Freddie Mac and the Treasury Department over $124 billion in payments the two lenders were required to make to the government after the 2008 housing crisis.

Justice Samuel A. Alito Jr., writing for a unanimous court on this point, rejected the shareholders’ argument that this so-called profit sweep exceeded the agency’s statutory authority.

But he added, now writing for six justices, that the law that created the housing agency violated the Constitution because it insulated the agency’s director from presidential oversight.

“The president’s removal power serves important purposes regardless of whether the agency in question affects ordinary Americans by directly regulating them or by taking actions that have a profound but indirect effect on their lives,” Justice Alito wrote. “And there can be no question that the F.H.F.A.’s control over Fannie Mae and Freddie Mac can deeply impact the lives of millions of Americans by affecting their ability to buy and keep their homes.”

The court issued a similar decision last year, ruling that a law insulating the director of the Consumer Financial Protection Bureau from presidential supervision violated the separation of powers.

Since the housing agency’s shareholders and the Trump administration had agreed that the law creating the agency’s structure was unconstitutional because it barred the president from firing its director without cause, the court appointed Aaron L. Nielson, a law professor at Brigham Young University, to defend the law when the case, Collins v. Yellen, No. 19-422, was argued in December.

The laws creating the two agencies were different, Mr. Nielson argued. Before the court’s decision in the case on the consumer bureau, its director could be fired only for “inefficiency, neglect of duty or malfeasance,” a demanding standard.

By contrast, the director of the housing agency may be fired only for cause, which, Mr. Nielson said, “provides the weakest protection in removal law and can easily be read to allow removal based on policy disagreement with the president.”

Justice Alito disagreed, saying last year’s decision was “all but dispositive.” He also rejected the argument that the housing agency’s specialized responsibilities required a different analysis.

“The president’s removal power serves vital purposes even when the officer subject to removal is not the head of one of the largest and most powerful agencies,” Justice Alito wrote. “The removal power helps the president maintain a degree of control over the subordinates he needs to carry out his duties as the head of the executive branch, and it works to ensure that these subordinates serve the people effectively and in accordance with the policies that the people presumably elected the president to promote.”

“The court has proved far too eager in recent years to insert itself into questions of agency structure best left to Congress,” she wrote. “In striking down the independence of the F.H.F.A. director, the court reaches further than ever before, refusing tenure protections to an agency head who neither wields significant executive power nor regulates private individuals.”

Michael R. Bright, the chief executive of the Structured Finance Association, a trade group that supports investors in securitized mortgages and other loans, said the Supreme Court had ruled as many had expected. Mr. Bright said a ruling in the investors’ favor would have led to the federal government “writing an expensive check on the part of taxpayers.”

Laurie Goodman, vice president for housing finance policy at the Urban Institute, said with a new director at the F.H.F.A., the talk about privatizing Fannie and Freddie was probably over. While she said no one liked the conservatorship, she did not expect any push by the Biden administration to end it any time soon.

“You can serve a number of public policy goals while in conservatorship,” she said.

One of those goals, she said, is making it easier for people to get mortgages, particularly in lower-income communities, to buy homes. Ms. Goodman said there also could be some move to encourage Fannie and Freddie to promote lending to buyers of mobile homes — often seen as a more affordable path to homeownership.