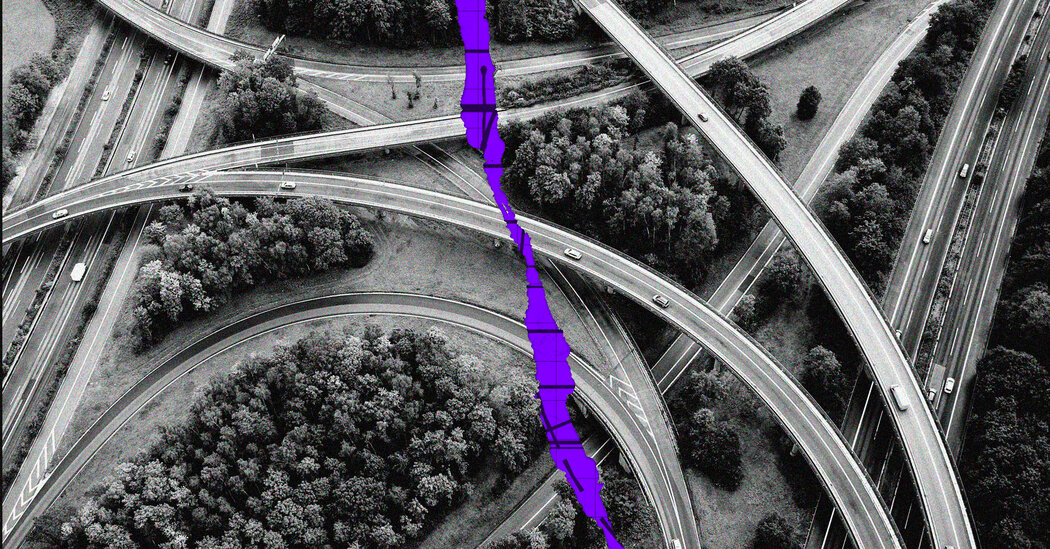 Ten months into his presidency, Joe Biden has yet to deliver on some of the biggest agenda items that defined his campaign, like a national paid family leave program or a clean electricity standard to combat climate change. But the bipartisan infrastructure bill he signed into law this week is still significant: At $1.2 trillion, it’s the largest investment in roads and bridges and power lines in more than a generation.

That investment, engineers and economists say, is sorely needed: Compared with many of its peer nations, the United States has patchier, pricier internet service, slower passenger trains, a less future-proof electric grid, and higher exposure to unsafe drinking water.

The question, though, is whether the legislation will be enough to deliver on the lofty promise, as Biden said it would during the signing ceremony, to “rebuild the backbone of this nation.” Here’s what people are saying.

What’s in the law

Of the $1.2 trillion allocated by the legislation, about $550 billion is new spending that will be spread out over five years; the remaining funds are devoted to existing transportation programs that otherwise would have expired. After adjusting for inflation, the new spending is roughly equivalent to the cost of the Interstate Highway System constructed under the Eisenhower administration.

Here are some of the biggest investments:

Why has “Infrastructure Week” been such a long time coming? The answer goes back to 1970, when, according to the Yale economist Ray Fair, the federal government began to steadily reduce how much it spent on infrastructure as a percentage of G.D.P. — a trend he observed in no other country. “The overall results,” he wrote in a 2019 paper, “thus suggest that the United States became less future-oriented, less concerned with future generations.”

Americans are now living with the consequences of that disinvestment. “The relatively decrepit state of American infrastructure acts like a tax on our economy and a drag on our well-being,” my colleague David Leonhardt wrote recently. “It slows the movement of people and goods and reduces the quality of everyday life.”

One problem the bill could go a long way toward fixing is what’s known as the digital divide. “The past year has been one long reminder that, for all of the nation’s economic strengths, we are woefully unprepared for our digital future,” Adie Tomer of the Brookings Institution wrote in August. “There are still about 17 million households who don’t have broadband of any kind, and the patterns of geographic disconnect follow the same stubborn neighborhood divides by income, education and race.”

Fortunately, Tomer told The Times, the $65 billion in new broadband spending would suffice to expand access to 50 percent to 75 percent of those Americans who lack high-speed internet.

The legislation also includes the first major U.S. investment to defray the costs of climate change, as The Times’s Coral Davenport and Christopher Flavelle write. The $47 billion allocation falls short of what many experts call for, but still, “this greatly exceeds anything we were able to get under the Obama administration,” said Alice Hill, who oversaw planning for climate risks on the National Security Council in that period. “We’ve made enormous progress.”

The law spends comparatively little on efforts to prevent, rather than merely adapt to, climate change. But The Wall Street Journal’s Jennifer Hiller writes that the legislation could still make a significant impact in that arena by funding a network of charging stations for electric vehicles — a vital precondition for their mass adoption.

“These are big, big numbers relative to what’s happened in the United States,” Nick Nigro, founder of Atlas Public Policy, a Washington research firm that tracks the electric vehicle market, told her. “This is transformational for electric vehicles.”

Whether the law will have any electoral payoff for the Democrats in 2022 and 2024, as the White House hopes, is impossible to say. But “Biden is making good on a key campaign promise that will benefit people in all 50 states,” The Times’s Michelle Cottle writes. “Ultimately, that is what Americans care about.”

Many economists, policy analysts and engineers say that $550 billion in new spending, while significant, is still insufficient to meet the country’s infrastructure needs. How much would be?

“So, it’s about half what the gap is,” Maria Lehman, the organization’s president-elect, told Scientific American. “The bill, as it stands right now, is more than we’ve ever invested, and in some categories of infrastructure, it’s as much as double. But it’s still overall not enough.”

David Van Slyke, dean of the Maxwell School of Citizenship and Public Affairs at Syracuse University, agrees. “We’ve got to be sober here about what our infrastructure gap is in terms of a level of investment and go into this eyes wide open, that this is not going to solve our infrastructure problems across the nation,” he told The Associated Press.

Take, for example, Chicago: As The Times’s Astead Herndon reported last week, the White House’s commitment to replace every one of the nation’s lead pipes has been closely watched in that city, which has more such pipes than any other in the country. Industry experts have said that making good on that promise would cost $60 billion. The White House initially proposed $45 billion, and the legislation Biden signed allocates only $15 billion. An additional $10 billion would come from the reconciliation bill that’s still working its way through Congress.

“This is the first time we’ve had the administration actually step up and say, ‘We want to tackle this problem head on,’” said Jeremy Orr, an environmental lawyer with the Natural Resources Defense Council. “But we need more than federal dollars. They need to prioritize communities that are hit the hardest, and we know where those communities are.”

Even Vice President Kamala Harris has acknowledged the law’s shortcomings. “This legislation — as significant as it is, as historic as it is — is Part 1 of 2,” Harris said. “The work of building a more perfect union did not end with the railroad or the Interstate, and it will not end now.”

But the fate of the reconciliation bill is uncertain at best. And ultimately, the success of the programs that made it into the bipartisan one may depend on how they’re carried out, and much of that has been left up to the states.

“Projects for bridges, transit, ports, airports, electricity substations and more that funnel money to outside consultants run the risk of producing a few new millionaires but not many other benefits,” The American Prospect’s David Dayen writes. “Bottom line: If the infrastructure money is effectively stolen, you won’t have a successful investment.”

“Biden Got His Infrastructure Bill. Now He Has to Sell It to Voters.” [The New York Times]

“Biden’s $7.5 billion E.V. charging plan will require a lot of patience” [The Verge]