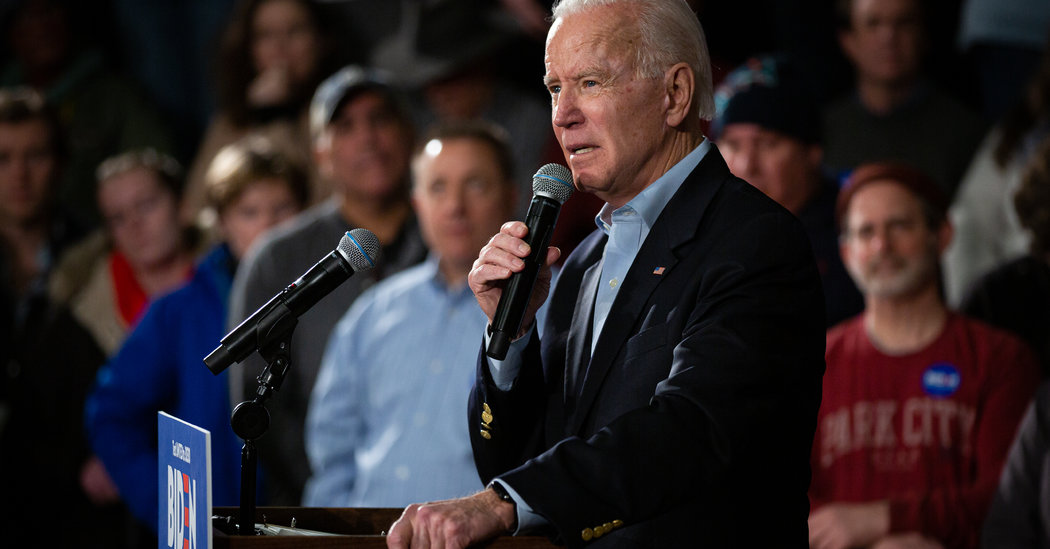 DOVER, N.H. — Tensions in the Democratic presidential primary reached new heights on Saturday as former Vice President Joseph R. Biden Jr. and former Mayor Pete Buttigieg clashed over experience in their most pointed confrontation to date, while Senator Bernie Sanders lashed both Mr. Buttigieg and another opponent, Michael R. Bloomberg, on the final weekend before the New Hampshire primary.

With Mr. Sanders and Mr. Buttigieg vying for the lead in polls of New Hampshire voters, and Mr. Biden under growing pressure to revive his campaign after his fourth-place finish in Iowa, the crossfire signaled that the Democratic contest had reached a new, more contentious phase after the candidates spent much of the last year aiming their criticism at President Trump.

The attacks by Mr. Biden and his campaign on Mr. Buttigieg were the most revealing moment of the day: Mr. Biden, whose collegiality and warmth are among his trademarks, has rarely denigrated rivals in such personal terms as he did with Mr. Buttigieg on Saturday, questioning his experience as a small-city mayor and unfavorably comparing him to President Barack Obama.

Speaking with reporters Saturday afternoon, he repeatedly suggested that Mr. Buttigieg’s calls for change implied criticism of the Obama era. When pressed on whether his jabs at Mr. Buttigieg’s mayoral resume were comparable to Hillary Clinton’s swipes at then-Senator Obama during the 2008 primary — and if the remarks were an “act of desperation” — he bristled.

The stakes in Tuesday’s New Hampshire primary are immense for all three candidates. Should Mr. Buttigieg erase Mr. Sanders’s weekslong polling lead in the state, as he did in Iowa, he will cement himself as the leading candidate among the moderate contenders, who include Mr. Biden and Senator Amy Klobuchar.

If Mr. Sanders hangs on and prevails on Tuesday, he will increase his edge over the other liberal in the race, Senator Elizabeth Warren, and bolster his chances of winning the Nevada caucuses on Feb. 22 — a turn of events that could make him difficult to stop in the fight for the Democratic presidential nomination.

As for Mr. Biden, his campaign and career are on the line: If he is humiliated on Tuesday for the second time in two weeks, his political advantages in Nevada and South Carolina, which holds its primary on Feb. 29, could crumble.

Mr. Biden’s aides went even further than the candidate in attempting to slow the momentum of Mr. Buttigieg, who has steadily gained strength in New Hampshire polls after he and Mr. Sanders both finished at the top in Iowa.

The Biden campaign released a biting web ad comparing Mr. Buttigieg’s experience as a former mayor — “Pete Buttigieg revitalized the sidewalks of downtown South Bend by laying out decorative brick” — to Mr. Biden’s tenure in the White House and Senate. The commercial also swiped at Mr. Buttigieg over matters of policing and race, the most delicate issues he is facing as he labors to build support among black voters.

The spot went viral online, prompting a Biden staffer to boast that it had quickly gained more views than the population of South Bend. But it also led to a withering retort from Mr. Buttigieg’s campaign.

“The vice president’s decision to run this ad speaks more to where he currently stands in this race than it does about Pete’s perspective as a mayor and veteran,” said Chris Meagher, a spokesman for Mr. Buttigieg.

Mr. Biden kept up the criticism in an interview with George Stephanopoulos of ABC News, as he lit into Mr. Buttigieg’s struggles to connect with voters of color. A recent poll from Quinnipiac University showed that Mr. Buttigieg did not register with black voters.

Yet to reporters on the campaign trail, Mr. Biden insisted that his criticisms of Mr. Buttigieg in recent days didn’t violate his frequent warnings against Democratic infighting.

“When you get attacked, you’ve got to respond,” he said, alluding to the criticism Mr. Buttigieg aimed at him as an avatar of the Washington status quo in the closing days of the Iowa race. “I’ve kept my mouth shut for a long time.”

But if there was any doubt why Mr. Biden was escalating his rhetoric so much, he let slip, as he is wont to do, the pressure he is under to turn around his campaign in the primary on Tuesday.

“The reports of our death,” he said during a visit to a field office in Manchester, “are premature.”

Mr. Buttigieg did not lob counterattacks of his own at Mr. Biden, but rather sought to use the former vice president’s mockery of his mayoral experience to make a virtue of his municipal background.

“What business does a mayor of South Bend, Ind., have running for president?” he asked rhetorically, suggesting his city had been “reduced to a punchline by Washington politicians.”

At a stop on the campus of Dartmouth College in Hanover, N.H., Mr. Buttigieg said his own lack of Washington experience was “exactly the point.”

There are, he said, many “small- and medium-sized cities like mine, that feel like Washington can’t even hear us” and vowed “to carry those voices to Washington.”

Yet he did not just push back against Mr. Biden and Ms. Klobuchar, who attacked him even more aggressively during Friday’s debate. Mr. Buttigieg also went on the offensive in hopes of coalescing moderate Democrats and displacing Mr. Sanders from his lead here.

“There’s another approach out there that says you can be for a revolution, or you must be for the status quo, those are your two choices,” Mr. Buttigieg said in Hanover. “My concern is that in a divided nation, that leaves a lot of people with nowhere to go.”

If Mr. Buttigieg is to win here Tuesday, he will have overcome not just Mr. Biden’s assault but also signs of political momentum for Ms. Klobuchar, who appeared to have gained some converts at her Saturday rallies following her confident debate performance. And the former mayor will also have to withstand direct attacks from Mr. Sanders, whose campaign has shifted its fire away from Mr. Biden and trained its sights on Mr. Buttigieg.

Addressing supporters in Dover, near New Hampshire’s coastline, before they went out for afternoon door-knocking, Mr. Sanders attacked Mr. Buttigieg by name.

“Billionaires by the dozen are contributing to Pete Buttigieg’s campaign,” said Mr. Sanders, who typically does not use his stump speech to lash his Democratic opponents.

“Now, I like Pete, he’s a smart guy, he’s a nice guy,” he continued. “But if we are serious about political change in America, that change is not going to be coming from somebody who gets a lot of money from the C.E.O.s of the pharmaceutical industry.”

But Mr. Buttigieg wasn’t the only more moderate Democrat Mr. Sanders took on in his remarks — he also invoked “the former mayor of New York” and suggested that Mr. Bloomberg is seeking “to buy an election” by pouring hundreds of millions of dollars from his personal fortune into the race.

Mr. Bloomberg, though, was far from the snowy New Hampshire campaign trail. He is not contesting the traditional early states.

While Mr. Sanders was deriding his self-funding, Mr. Bloomberg was in Washington addressing Democratic governors, a constituency that has been watching the party’s increasingly heated primary with growing despair.

Ms. Warren, for her part, did not dwell on rivals on Saturday, focusing instead on encouraging her supporters to turn out to vote on Tuesday and help her achieve a stronger showing than her third-place finish in Iowa.