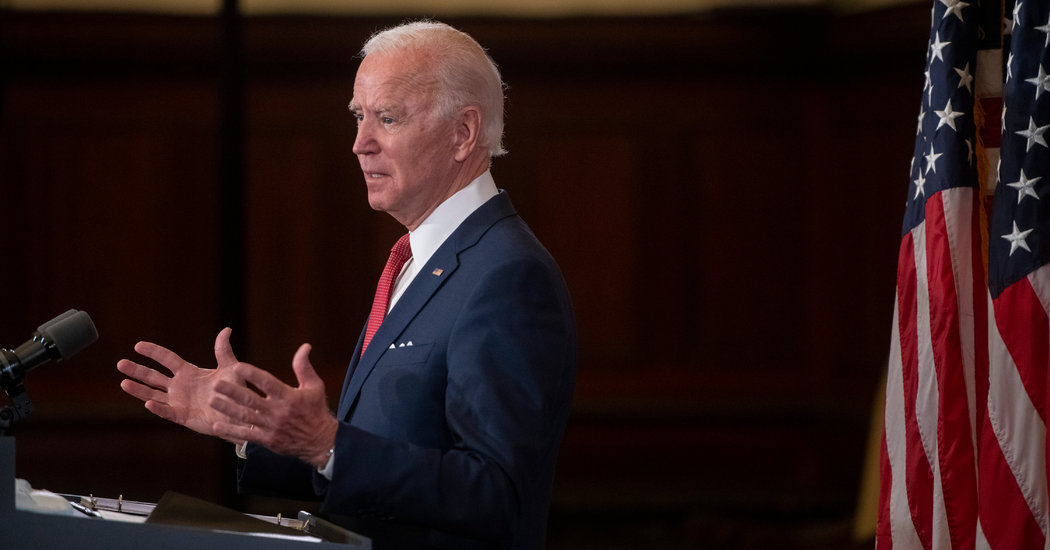 Former Vice President Joseph R. Biden Jr. staked out a careful position on Monday in support of a law enforcement overhaul but not defunding police departments, rebutting a new Republican attack line as he tries to harness growing activism against systemic racism while not alienating protesters or more moderate voters.

In the face of continuing protest marches calling to “defund the police” nationwide in the aftermath of George Floyd’s killing, Mr. Biden’s campaign said in a statement that he “hears and shares the deep grief and frustration of those calling out for change” and that he “supports the urgent need for reform.” But a campaign spokesman, Andrew Bates, said flatly that Mr. Biden was opposed to cutting police funding and believed more spending was necessary to help improve law enforcement and community policing.

Mr. Biden’s effort to address the calls of protesters while supporting law enforcement comes after gruesome videos and energetic protests have quickly reshaped public opinion about racial discrimination, seemingly opening a substantial window for new policies that could bring far-reaching change to law-enforcement agencies long accused of racially discriminatory practices. But there are already signs of division between activists who are eager to dismantle police departments and congressional Democrats who favor a less drastic overhaul of law enforcement.

President Trump’s campaign and leading Republicans have sought to drive a wedge between the immediate-but-incremental calls for change among elected Democrats and the more sweeping demands that protesters are calling for in places like Minneapolis, where the death of Mr. Floyd after police officers pinned him down has prompted worldwide calls for racial justice.

Mr. Trump, for his part, has not endorsed any new changes to policing procedures or funding. On Monday, he met with law enforcement officials at the White House and praised them, saying virtually all police officers were “great, great people” and boasting on Twitter that crime was low nationwide.

The debate within the Democratic Party was on plain display on Monday, as congressional leaders unveiled a broad legislative program on policing, including new limits on the use of lethal force and on the legal protections afforded to officers accused of misconduct. Only hours before, progressives at the municipal level in Minneapolis pledged on Sunday to take apart the city’s long-troubled Police Department and rebuild it altogether.

Asked by the CBS host Norah O’Donnell on Monday if he supported defunding the police, Mr. Biden answered: “No, I don’t support defunding the police. I support conditioning federal aid to police based on whether or not they meet certain basic standards of decency and honorableness.”

Mr. Biden’s position — a stance on policing that another prominent Democrat, Bill Clinton, might have summed up as “mend it, don’t end it” — aligned him far more closely with lawmakers in Washington than with activists and left-wing lawmakers at the municipal level. His approach drew wide support from Democratic Party officials and a number of civil rights leaders, as well as politicians in the swing states likeliest to decide the general election.

That’s in part because few Democrats have embraced activist demands to make deep cuts to police budgets or to shutter local law-enforcement agencies altogether. Answering those calls, most party leaders have tried to mingle sympathy for the underlying grievances of police critics with Biden-style rejection of ideas like police abolition.

“We need police officers, and we need law enforcement,” said Bob Buckhorn, the former mayor of Tampa, Fla., and a supporter of Mr. Biden’s. “They are oftentimes the only thing between good and evil, and between chaos and calm.”

Mr. Buckhorn said policymakers needed to address legitimate “built-up anger,” but he also cautioned, “Anybody who is suggesting that they defund the police, whatever that means, I think would be making a terrible mistake.”

Even a number of progressive Democrats do not think Mr. Biden should suddenly veer left.

“That puts him in front of people he’s not usually in front of and demonstrates what kind of leader he is,” Lt. Gov. Garlin Gilchrist II of Michigan said.

Quentin James, who runs an organization dedicated to electing African-American officials, said, “I don’t think we need him to say ‘defund police,’ but he can help lift up groups like Collective PAC that are trying to elect reform-minded prosecutors.”

Mr. Trump’s attempts to mount a soft-on-crime campaign against Mr. Biden may prove difficult. The 2020 presidential election, after all, is not Mr. Biden’s first attempt to balance the public’s appetite for change with deeply rooted conservatism in much of the country.

He channeled the rage of young voters who were furious about Vietnam and Watergate to claim a Senate seat in Delaware in the same year that Richard M. Nixon won a 49-state re-election landslide thanks to the perceived excesses of the Democratic left and its presidential nominee, George McGovern.

Ever since, Mr. Biden, 77, has carefully balanced the passions of activists with the sensibilities of the political center, portraying himself as both a champion for racial equality and a reliable ally of law enforcement.

His statement on Monday and a speech he gave last week in Philadelphia reflected the impulses of someone who, for much of his career, represented a state that was politically competitive and split between a heavily urban northern tier and its so-called “slower lower” rural south.

Mr. Biden’s positioning also owes to his grounding in a Senate where forging consensus was a necessity even if it meant, as he memorably noted last year, working with segregationists.

Such comments infuriated many Democrats during the party’s presidential primary race, especially younger progressives who, at their most charitable, viewed him as a well-meaning if out-of-touch relic from yesteryear.

Yet then as now Mr. Biden has been greatly aided by Mr. Trump, whose divisive message and conduct have only alienated up-for-grabs voters who are craving stability. At this stage in the campaign, voters are comparing Mr. Biden — to borrow a Bidenism — not to the Almighty but to the alternative, and so far Mr. Trump has offered little to Americans seeking a sympathetic and textured response to the crisis.

Mr. Biden is also finding it easier to stake out ground in support of overhauling the police because the polling has shifted considerably on the issue, making it harder for Mr. Trump to gain much leverage from his repeated calls for “law and order.”

A new NBC News/Wall Street Journal poll indicated that just 27 percent of voters said they were more worried about the protests, some of which have turned violent, than about the death of Mr. Floyd and police conduct. Among white voters, that figure was just 30 percent.

“With the video footage we are now seeing, even the typical voter who’s all for law and order is not going to be able to ignore the fact that in some police departments, in the department themselves, they lack law and order,” said Representative Anthony G. Brown, Democrat of Maryland.

Mr. Brown likened this moment to the violence that law enforcement inflicted on civil rights protesters in the 1960s, which he said was when “decent Americans woke up and said, ‘Hey, that’s wrong, we have to do something.’”

Just as there were divisions in the civil rights movement between older leaders and younger, more radical activists, however, some of the same generational differences exist today.

“I’ve seen this in neighborhood meetings where a young person will come in and say, ‘We have too many police officers here,’ and I’ll see a senior saying, ‘Oh, no, no, that’s not true,’” said Mayor Nan Whaley of Dayton, Ohio, a Democrat.

This split has also found its way into the ranks of Democratic lawmakers. On Monday, Representative James E. Clyburn of South Carolina — who is now the highest-ranking black member of Congress but, in his youth, was jailed during protests — bitterly complained on a private conference call with other lawmakers about those trying to “hijack” the swelling movement with calls to defund the police.

Later on the call, however, Representative Alexandria Ocasio-Cortez of New York, 30, warned against actions that would “demoralize or undercut” protest leaders, according to a House Democratic official familiar with the conversation.

Mr. Biden has sought to avoid inflaming either constituency. In his speech last week, he was blunt that the story of America “isn’t a fairy tale.” Yet he invoked the Civil War, the Great Depression and often bloody civil rights protests to argue that “in some of our darkest moments of despair, we’ve made some of our greatest progress.”

Representative Colin Allred of Texas said that recalling past crises and the progress that emerged from them was a way to assure voters that better days are ahead while also recalling pre-Trump presidential leadership — “a call for change and a call for restoration,” as Mr. Allred, a Democrat, put it.

In the swing state of Nevada, Chris Giunchigliani, a Democratic former member of the Clark County Commission, warned her party that incremental improvements to policing would not be enough. Making a few changes at the federal level and then declaring victory, she said, might “give people false hope that things are fixed,” when an overhaul would require meticulous work at the state and local level.

“To folks who want to defund: You need a police department, I think that’s reasonable,” said Ms. Giunchigliani, a former candidate for governor. “But I think it’s time to take a step back and work on: What should policing in the community be?”

As encouraging as the polling on police issues is for Democrats right now, many in the party are wary of putting too much confidence in the expressions of support from white voters who have historically recoiled from seeing public officials at odds with law enforcement.

Partly for that reason, black leaders are eager to see Democrats press hard in the coming weeks for the moderate slate of policy changes proposed on Monday, in the hope that they could be passed swiftly in an environment that is favorable but could turn out to be fragile.

Marc Morial, the president of the National Urban League, said he believed the country was at a “transformative moment,” in which the killing of Mr. Floyd had shaken white voters from passive sympathy to active support for overhauling law enforcement.

“I think there’s always been support there, but I think it’s been muted,” said Mr. Morial, who served two terms as mayor of New Orleans. Now, he said, there’s a new majority and it’s not at all silent.