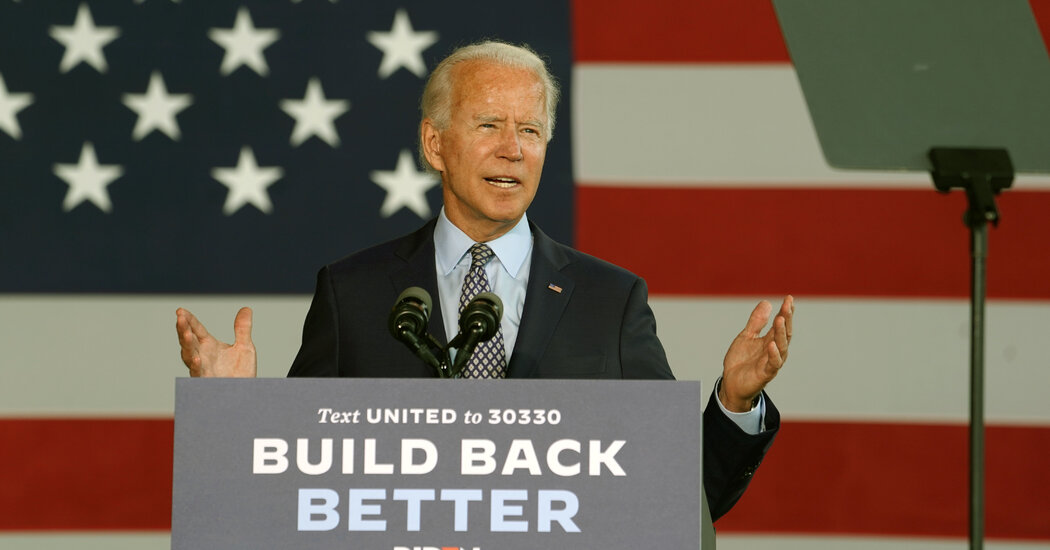 WASHINGTON — When Joe Biden was nominated as the Democratic Party’s presidential candidate last week, he committed not only to rebuilding America, but also to “build it back better.” His campaign is selling a promise: Soon President Trump will be gone and the United States can return to the normalcy of pre-Trump life, slightly improved. This is as true of foreign policy as of anything else.

To anyone who has lived through the chaos of the last four years, a reversion to the status quo ante is tempting. Who wouldn’t want to go back to a time when foreign policy wasn’t made by tweet? And a Biden presidency would undoubtedly look and sound better than Mr. Trump’s: President Biden would give speeches about American leadership, reiterate American support for allies and criticize human rights abuses overseas.

But we should be wary. Mr. Biden appears less likely to improve America’s foreign policy than to return us to a narrow Washington consensus that has failed our country and the world.

The campaign’s rhetoric on foreign policy is, to be fair, vague. It is full of invocations of American leadership and global challenges — the boilerplate you might expect. But it pledges an extremely wide-ranging set of foreign policy goals, from advancing human rights and confronting autocrats and populists to ensuring that the United States military remains the strongest in the world.

These aren’t just platitudes. They signal a reversion to the post-Cold War view that America can and should be everywhere and solve every problem. It’s the kind of approach that could commit the United States to more years of high military spending, an even longer “global war on terror” currently fought in over a dozen countries, further humanitarian interventions that turn into quagmires and a more confrontational approach to China and Russia.

In short, Mr. Biden’s vision looks less like a better approach to foreign policy and more like a rerun. As Paul Musgrave, a political scientist at the University of Massachusetts Amherst, put it: “His positions are so familiar as to seem more like a retelling of the conventional wisdom than a foreign policy platform.”

But this “familiar” approach has led again and again to failure in recent years. Whether in Iraq, Libya, Ukraine or elsewhere, the United States has encountered problems that can’t be solved with a more “muscular approach” or more “American leadership” (to use two favorite clichés of the foreign policy establishment). Mr. Biden is ignoring the one positive aspect of Mr. Trump’s presidency: that it has pushed Americans to question whether our traditional foreign policy approach actually makes us safer.

Of course, a Biden administration wouldn’t necessarily replicate past failures. Campaign documents and stump speeches aren’t always good guides to how a president will act. And Mr. Biden’s record is decidedly mixed. For every substantive failure of judgment — like his support for the invasion of Iraq in 2003 — there are times where he’s been a surprising voice for restraint, as when he argued against the overthrow of Libya’s Muammar el-Qaddafi in 2011.

For now, the best way to understand where Mr. Biden stands today is to look at the people with whom he has surrounded himself. If personnel is policy, so far it looks like we’ll be getting little more than a rehash of the Beltway consensus.

Jake Sullivan, the vice president’s former national security adviser, is now senior adviser to his campaign. Writing in The Atlantic this month, Mr. Sullivan argued that the United States must re-embrace American exceptionalism, returning to a foreign policy of global leadership with “a renewed belief in the power of American values in the world.”

Many of Mr. Biden’s other advisers also seem to want to return America to the pre-Trump interventionist consensus. Nicholas Burns — a formal campaign adviser — was a strong proponent of the 2003 Iraq War. And Antony J. Blinken, who preceded Mr. Sullivan as Vice President Biden’s national security adviser and is now a top foreign policy aide on the campaign, co-authored an essay in 2019 with the neoconservative Robert Kagan condemning Mr. Trump’s willingness to consider removing troops from Afghanistan and criticizing Barack Obama’s decision not to intervene in Syria. (Mr. Blinken was also previously a contributing Opinion writer for The Times.)

Other former Obama hands are involved in more informal campaign roles: Samantha Power is well known for advocating intervention in Libya, Syria and elsewhere. And Michèle Flournoy, widely touted as a possible secretary of defense, argued just a few weeks ago that the United States must make “big bets” with military spending to maintain our military capabilities.

Progressive voices — including those from the Obama administration — seem to have been left out of the campaign. That’s a shame, not least because this year’s Democratic primary was notable for its debates on foreign policy. Senators Bernie Sanders and Elizabeth Warren helped push important conversations on key issues like military spending and the use of force, reflecting the hunger of the Democratic base for something new. (And it’s not just the Democratic base. Mr. Trump’s antiwar rhetoric in 2016 was popular with Republican voters, too.)

By seeking to restore American leadership, Mr. Biden is also likely to miss the opportunity to build a more constructive, less militarized foreign policy that sees allies as real partners, not just as followers. Such an approach would push to increase burden sharing, something Mr. Trump has championed, if inelegantly. It would focus on multilateral diplomacy — rather than simply pushing American demands — wherever possible. And it would seek to dial down tensions with China rather than intensify them through increased military presence or sanctions.

At the end of the day, there’s little doubt that Mr. Biden’s foreign policy would be better than that of Mr. Trump. From his lawless assassinations in the Middle East and his contempt for diplomacy to his incessant attempt to drum up confrontation with China, Mr. Trump has been a destabilizing force in the world.

But his unusual presidency did create an opportunity for Americans. It allowed them to question old — and flawed — assumptions about our country’s approach to the world. By taking us back to the past of American foreign policy, Mr. Biden is doing the opposite. He might think he’s returning us to normalcy. Instead, he’s squandering his opportunity to build American foreign policy back better.

Emma Ashford (@EmmaMAshford) is a research fellow in defense and foreign policy at the Cato Institute.