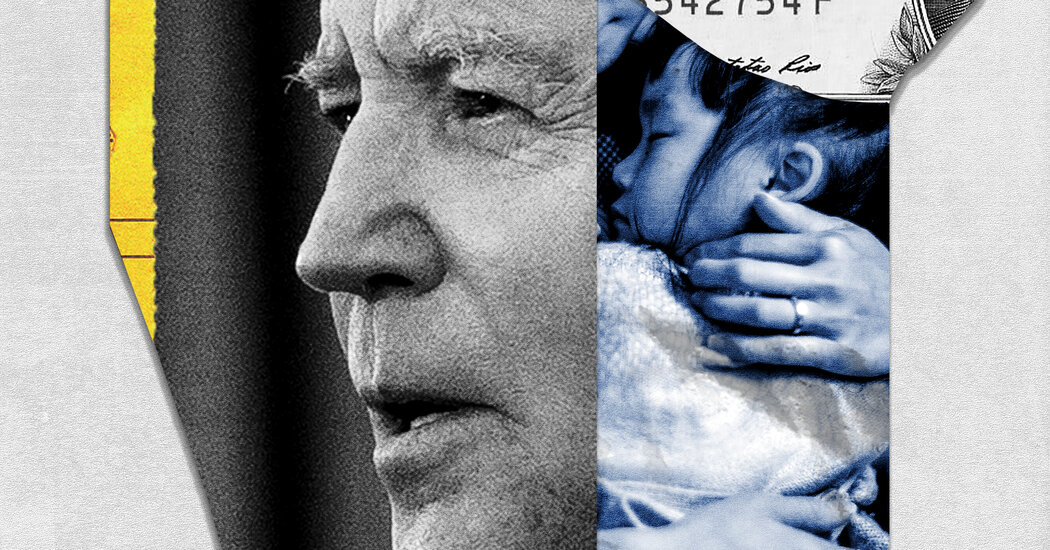 “No one should have to choose between a job and a paycheck or taking care of themselves and a loved one — a parent, spouse or child,” President Biden told Congress in late April. It’s a simple yet profound concept in a country that, unlike all its wealthy peers, doesn’t guarantee paid family leave. We’re also a country that invests so little in child care and early education that American parents, usually mothers, are frequently faced with an impossible choice between child care and career.

Given our pitiful policies, it’s easy to be groundbreaking. Just because we have nothing doesn’t mean we should accept anything. Mr. Biden has put forward a pathbreaking infrastructure package that would create the first-ever federal paid leave guarantee and increase federal child care investment more than tenfold. But he has also chosen to base his proposals on policies put forth years ago, ignoring the research and lessons learned from state experimentation in the meantime that prove we need to go much further.

Some of his Democratic challengers in the presidential race took note of these developments and ran on state-of-the-art proposals. Mr. Biden has chosen to ignore those, too. In trying to play it safe, he’s casting aside the best thinking we have.

The details of Mr. Biden’s child care plan are scant. While he promises to create a federal-state partnership to bring free, high-quality, universal preschool to all 3- and 4-year-olds, his goals for younger children look very different. He proposes a system that would offer financial help to families on a complicated sliding scale: free for the “most hard-pressed” families, with costs capped at 7 percent of income only for those earning up to one and a half times their state’s median income. He would also spend money on helping child care providers meet quality standards and offer better wages and benefits to their staffs.

It looks a lot like a plan first put forth by Senator Patty Murray and Representative Bobby Scott, the Child Care for Working Families Act, which has far more details but follows similar outlines. And that plan does indeed represent a “major improvement” in child care funding, said Chris Herbst, an associate professor of public affairs at Arizona State University who has extensively studied the child care system. Three-quarters of American families would receive government support for child care, and the plan would also streamline the way it’s delivered and turn child care assistance into an entitlement owed to all eligible parents.

What Mr. Biden’s child care plan does not resemble is the universal proposal Senator Elizabeth Warren introduced while running against him in the Democratic primary. Ms. Warren’s plan offers financial support to everyone. Families that earn less than twice the poverty line — which would be $52,400 a year for a family of four — would pay nothing, and all those above that would have their costs capped at 7 percent. It would also mandate federal investment in creating a network of public, locally run child care centers and home-based day cares that would have to meet rigorous quality standards.

This approach stands a better chance of raising quality across the board. The model put forward by Ms. Murray and Mr. Scott, and therefore, it seems, the Biden administration, carries serious risks. “Quality is my biggest concern,” Dr. Herbst told me. Both plans intend to put more money into helping day cares upgrade and hold them accountable to standards, but it is in the details where it will all play out.

How do you measure quality? What counts as an upgrade in Mr. Biden’s plan? To be decided. Ms. Warren, by contrast, offers something more akin to “Head Start for all,” Dr. Herbst noted: a public option with very high standards set by the federal government, consistent in all 50 states. Private providers, then, would be not just offered the carrot of more money to upgrade their operations but also threatened with the stick of having to compete with a high-quality, government-run choice that could draw parents away.

A universal plan would also reap political rewards that a confusing, targeted approach would not. Throughout the world, universal programs have been found to enjoy more political stability, and they help activate people to get involved politically. President Franklin Roosevelt famously designed Social Security as a benefit everyone paid into and everyone could eventually claim because then “no damn politician can ever scrap my Social Security program.” There are fiscal rewards, too: It costs money to determine who does and doesn’t qualify for a benefit, rather than allowing anyone to claim it. Even in our digital age, such paperwork barriers often keep eligible people from enrolling.

After reading Mr. Biden’s proposal, compared to our current child care policies, “you’re doing cartwheels,” Dr. Herbst said. But if instead you compare it to something like Ms. Warren’s plan, “you may feel a bit let down.”

You’re left with the same feeling after reading Mr. Biden’s paid family leave proposal, which would be a completely new guarantee of paid leave in this country — and yet still does not go far enough. Mr. Biden has proposed requiring 12 weeks of paid time off for a variety of reasons: to adjust to the arrival of a new child, care for a serious illness of a loved one (or one’s own), deal with a loved one’s military deployment, grieve the death of a family member or seek safety from domestic violence, sexual assault or stalking. The lowest-paid workers — a group the plan doesn’t fully define — would receive 80 percent of their pay, while everyone else would get up to $4,000 a month.

The plan looks a lot like the Family Act, a bill that Democrats first introduced in 2013 and was seminal at the time for being the first federal paid family and medical leave legislation. But what’s become clear in the years since is that people need a lot more than that. “That’s the baseline,” Indivar Dutta-Gupta, a co-executive director of the Georgetown Center on Poverty and Inequality, told me. “Experts on the issue have moved on to something more robust.”

There is consensus among these experts now that six months off is the bare minimum that workers should be guaranteed. For new parents, the first six months are the most important for a newborn’s vaccinations, medical visits and breastfeeding and for forming an attachment. For a woman who just gave birth, major organ systems take months to return to normal, and postpartum depression tends to peak after about two to six months. Six months is also a good baseline for other needs, such as cancer treatment or recovery from complex surgery.

Six months would also pose few risks to the economy. There’s scant evidence that it would harm people’s attachment to their jobs in the long run or that it would harm employers — some may even find it easier to deal with a defined long-term absence than shorter spells. “There’s not really a lot of evidence for some optimal level of paid leave being less than six months, from the perspective of improving well-being and labor market outcomes,” Mr. Dutta-Gupta said. Other countries agree: Nearly three-quarters of developed nations guarantee six months of paid parental leave.

The amount of time off matters, and so does what people are paid while they’re away from their jobs. Offer them too little money and they can’t actually step away from work and continue to make ends meet. Low-income workers in California have been less likely to use the state’s program, and many of them say it’s because they wouldn’t be paid enough. Mr. Biden has acknowledged that low-wage workers are struggling by trying to raise their pay to $15 an hour. There’s little chance they can afford to take leave if they get only a fraction of that. Even better-paid workers will face the same conundrum when deciding whether and for how long they can take time away from work.

Mr. Biden should have listened to his own vice president when it comes to these policy questions. During her presidential run, Kamala Harris proposed six months of leave with full pay for those making less than $75,000 a year.

Then there’s how Mr. Biden wants to design the program. A report Mr. Dutta-Gupta helped author proposes social insurance like Social Security — we all pay in, and we are all entitled to the benefit when we need it. It’s the model three-quarters of other countries with paid leave have chosen for their programs. And here, too, it makes for good politics.

“Seeing that money come out of your paycheck increases awareness,” Mr. Dutta-Gupta said. Mr. Biden doesn’t detail how he would set his up, but given that he’s repeatedly pledged not to raise taxes on households making less than $400,000, he seems to have ruled out a new payroll tax and would instead be forced to find other funds to make it work, targeting a smaller slice of the population, like the very wealthy. That risks making the benefit look like a handout, not a right.

Cities and states have recognized that paid leave needs to be more robust. Workers in San Francisco now get their full pay while on leave, and California, the first state in the country with a paid family leave program, recently considered a bill to increase wage replacement statewide. States that have enacted their own laws since California have generally gone further in offering more weeks off and more pay than the ones before them.

Getting policy right the first time matters. Just look at the Family and Medical Leave Act, signed by President Bill Clinton in 1993, which guarantees only 12 weeks of unpaid time off. Thanks to its many requirements, about 40 percent of workers aren’t covered by it. It was meant to be a starting point, a foundation upon which lawmakers could layer on better coverage, more time off and, eventually, guaranteed pay. Yet nearly three decades later, it’s still the only federal leave structure we have.

So it’s important that Mr. Biden get the details right. He is, of course, threading a very tiny needle, not just trying to possibly garner some Republican support but also needing to keep all 50 Democratic senators on his side if his policies are to have any hope of passage, not to mention pleasing the Senate parliamentarian, who decides which policies can pass on a narrow party line vote through “budget reconciliation.” But the best starting point is the strongest policy possible.

Bryce Covert (@brycecovert) is an independent journalist and a contributing Opinion writer for The Times.