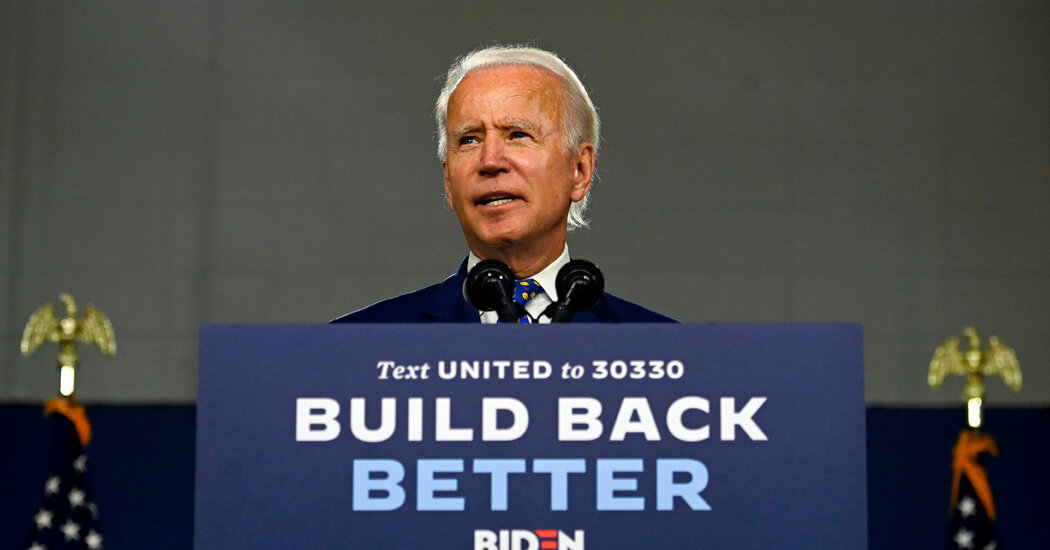 Joe Biden’s recent policy proposal to address the country’s crisis of care didn’t garner major headlines. There were no haphazardly capitalized Trump tweets in response, nor congressional Republicans denouncing it as socialism. But make no mistake: His plan is quietly radical in both its comprehensiveness and its framing.

Mr. Biden’s plan incorporates a lot of ideas that are not his own. His pledge to give all 3- and 4-year-olds access to preschool? President Barack Obama initiated an effort to ensure universal preschool in 2013. His promise to help parents afford child care? It piggybacks on Senator Patty Murray and Representative Bobby Scott’s Child Care for Working Families Act. His argument that caregivers deserve better pay and more rights? To get there, he says he’d sign the Domestic Workers Bill of Rights bill put forward by Senator Kamala Harris and Representative Pramila Jayapal in 2018.

But by bringing all of these pieces together in one place and by talking about them in the same breath with his other economic policies, he is pushing this conversation into new territory. No longer is the struggle to care for our families while earning a living something relegated to kitchen tables and curtained-off hospital beds. These challenges affect all of us, rippling throughout the entire economy. And Mr. Biden is the first presidential candidate to drag them out of the shadows and into the public conversation in such a sweeping way.

Mr. Biden’s plan ties together many kinds of care in one package: care for young children, care for elderly parents, and care for the sick and disabled. Each of these tends to get siloed off; as a result, they’re fought for by disparate advocacy groups, whose efforts target varied solutions. This fragmentation often keeps these constituencies from coalescing into a single movement.

Elder care is especially neglected in policymaking, despite the fact that the number of Americans age 65 or older is set to grow by more than 90 percent over the next four decades. Look no further for proof that we ignore the plight of the elderly than the abysmal way people in nursing homes have fared in the coronavirus crisis, where deaths recently passed 40,000. A vast majority of adults facing old age would prefer to remain in their homes, but in-home care is usually cost prohibitive or unavailable. Mr. Biden wants to find ways to make it more accessible and to ensure that the people who provide this care are paid and treated well.

But it’s not just the inclusion of all of these kinds of care — for the young, the old and the disabled — in one platform that breaks new ground. It’s also that Mr. Biden puts these ideas forward as a central part of his economic package, the heart of his campaign. This is both smart politics and smart policy.

That adequate child care undergirds the smooth functioning of the rest of the economy has become increasingly clear over the course of the pandemic. But it was true long before the virus. The share of American women in the paid work force has been falling behind that in other developed countries for decades thanks to a lack of investment in child care.We still haven’t made the same conceptual leap with elder care, however, or care for other family members who aren’t children — though we should. Those who care for their spouses or parents are also less likely to work, and even those with jobs miss over a week of work each year on average because of these responsibilities; the lost productivity costs more than $28 billion a year. Imagine how much more productive we could all be if we could obtain and afford quality care for our children, parents, spouses and siblings.

Mr. Biden didn’t simply drag out a mom to talk about this issue; he introduced his proposal by talking about himself. “I was a single parent for five years after my wife and daughter were killed and my two boys were badly injured,” he said, referring to a 1972 car accident. “We cared for our parents at the end. My dad was months in hospice in our home, same with my mom.” He also talked about caring for his son Beau before he died of brain cancer in 2015. This matters, because child care in particular has fallen all too often into the culture war over women’s roles at home and at work, neglecting the fact that fathers — and men generally — also have family members who need care.

Care is an issue that comes for almost all of us at some point in our lives. Even if we don’t decide to have children, we may very well find ourselves tending to a sick spouse or an aging parent. But very few of us are adequately prepared to shoulder the responsibility all on our own. And yet we have an economy, and a policy apparatus, that completely ignores this enormous burden.

While you might try to tell a father struggling to find a child care spot for his child, let alone pay for it, that he should have thought of this before he decided to have children — as if the optimal way to design our society is to make having children a luxury — it’s hard to argue that if you can’t afford decent and dignified care for your aging parent, you should have chosen not to have a parent get old. Binding these things together makes it clear: We all have a responsibility to make sure the vulnerable are adequately cared for.

With his announcement last week, Mr. Biden turned up the volume on something usually discussed in the fearful whispers of daughters worried about their mothers on the verge of dementia, or the hushed arguments parents have late at night about how to afford preschool. Mr. Biden put it squarely at the center of what he would do if he enters the White House. It was a remarkable moment, and one that could change the way we think about care for the long term.

Bryce Covert is a contributor at The Nation and a contributing Opinion writer.