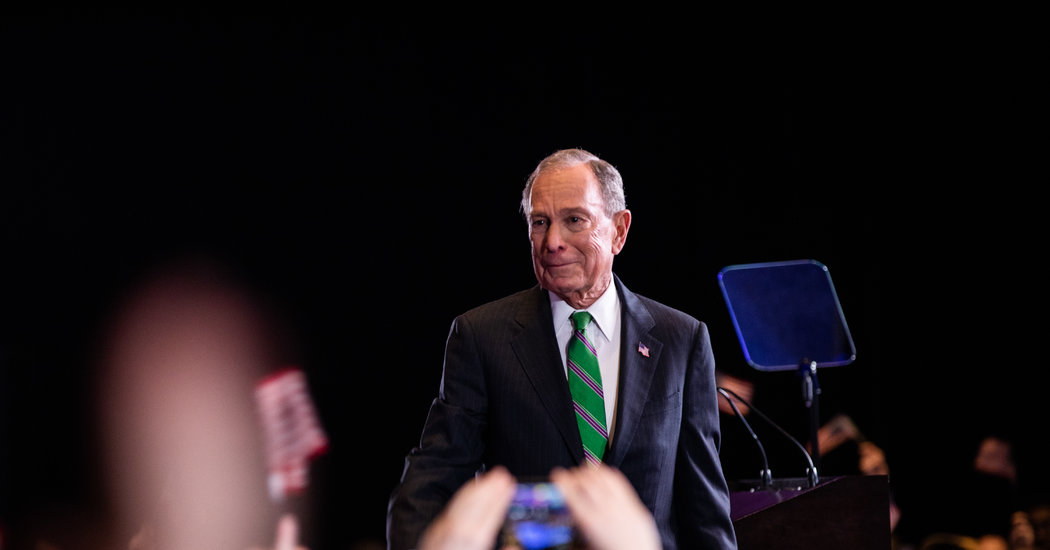 There is no billionaire way to end a presidential campaign.

The candidate still finds a hotel ballroom, still stands before a preponderance of flags, still gives a little wave to supporters from the microphone — no, thank you — no matter how many salaries he has paid, or field offices he has opened, or delegates he has won in American Samoa.

“Not sure what you say,” Michael R. Bloomberg began, when his turn came on Wednesday, shrugging from the lectern at a Sheraton event hall in Midtown Manhattan.

This reaction was understandable. Mr. Bloomberg has done many things successfully in his life. He has won in business. He has won City Hall. He has won praise for his philanthropy. Any professional setbacks, like the layoff that preceded his company’s founding in the 1980s or the assorted stumbles of his mayoral bids, have been presented in the retelling as more character-building than demoralizing.

And so, in his 78 years, Mr. Bloomberg had never confronted a moment quite like this: a big, heaping, public loss — hundreds of millions of dollars plowed into a candidacy that survived only a single evening of voting returns — and a roomful of people to tell about it.

“I have never,” he told them, “believed in doing anything halfway.”

Mr. Bloomberg, the former mayor of New York, started as he often does, dwelling on numbers and statements of mission. He had been to 73 cities, he enthused, and 27 states. He said his conversations on the road had “affirmed my faith” in the effort to defeat President Trump, addressing scores of staff members and other sundry fans of technocracy.

Many attendees wore campaign-branded shirts: “Mike for Black America”; “Veterans and Military Families for Mike”; “I Like Mike,” rendered three times in red, white and blue. (“I decided we have the slogan wrong,” Mr. Bloomberg said at one point. “This should be ‘Mike likes YOU.’ Thank you.”)

A halting chant of “Mike Will Get It Done” filled the space. Some guests hauled a cardboard cutout of the candidate for pictures. Others mouthed the punchline of a favored creed:

“Everyone else bring data,” a few people mumbled dutifully from the back.

Mr. Bloomberg allowed that the data had been unsparing: Staying in the Democratic primary, he determined, would hurt the cause of defeating Mr. Trump. Joseph R. Biden Jr. had his support. Mr. Bloomberg used chief-executive words (“cleareyed,” “overriding objective”) to explain himself.

And then, Mr. Bloomberg — almost ostentatiously unsentimental over much of his political career — seemed to go somewhere unexpected: inward.

“You know, I’ve been doing this for a long time,” he said, beneath circular light fixtures shining red, white and blue, overlapping like Olympic rings. “And every day gets better.”

He tapped on the platform in front of him. His voice appeared to be breaking. “I’m sorry we didn’t win,” Mr. Bloomberg said. “But it’s still the best day of my life. And tomorrow is going to be even better.”

He thanked his advisers for giving him “honest advice even when I didn’t want it.” He said he decided to run even though he “knew we didn’t have much of a chance,” assuming an underdog’s posture that was complicated somewhat by his runaway spending.

He described the campaign as “more than a young boy who memorized ‘The Midnight Ride of Paul Revere’ ever dreamed of.”

“I believe that our great nation still sees that light in the Old North Church tower,” he said, choking up again, his eyes appearing to redden a bit, “the light of freedom, the light of liberty, the light of equality and the light of opportunity.”

He shook his head slightly, as if taken aback by his body’s response to the circumstances. “We will not,” he said, wrapping up, “allow any president to dim that light.”

Mr. Bloomberg repeated a campaign mantra once more (“We will get it done”), staggering briefly through the catch in his throat.

He waved. He gave a thumbs-up. He embraced his longtime companion, Diana Taylor. And he was gone.

Staff members and supporters lingered for photographs and hugs and at least a few tears — speaking of vacation plans, next moves, when and where the drinking would begin. Many returned afterward to the campaign headquarters, through a Times Square that Mr. Bloomberg helped pedestrianize as mayor.

“We’re not sure what the off-ramping process will look like,” said Zachary Libow, 31, using a euphemism for job loss that might make a businessman proud.

Mr. Libow had been hired just about a week ago, he said, with a focus on the logistics of redeploying staff to states that vote after Super Tuesday.

He never met Mr. Bloomberg. He did not have to, he said, to appreciate the privilege of his position. “He was doing things that were different,” Mr. Libow said, wearing a matching hat and shirt that read “Mike 2020” in Hebrew.

He held for a beat: “And the benefits package was great.”