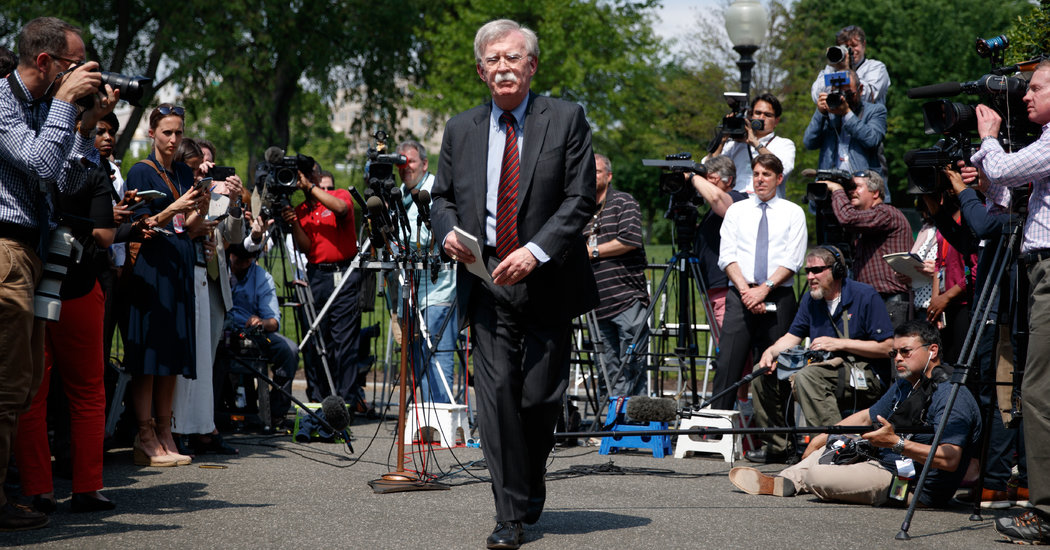 WASHINGTON — John R. Bolton, the former White House national security adviser, said on Monday that he was willing to testify at President Trump’s impeachment trial, putting new pressure on Republicans to call witnesses and raising the possibility of revelations as the Senate weighs Mr. Trump’s removal.

Mr. Bolton’s surprise declaration, in a statement on his website, was a dramatic turn that could alter the political dynamic of the impeachment process in the Senate and raise the risks for Mr. Trump of Republican defections. The former national security adviser is a potentially vital witness, with direct knowledge of presidential actions and conversations regarding Ukraine that could fill in blanks in the narrative of the impeachment case.

It came as the House continued to withhold the articles of impeachment necessary to start the trial in a bid to increase Democratic leverage in Senate negotiations over calling Mr. Bolton and three other administration witnesses the president blocked from testifying in the House inquiry.

“I have concluded that, if the Senate issues a subpoena for my testimony, I am prepared to testify,” Mr. Bolton said in the statement.

His decision raised immediate questions for Senator Mitch McConnell, Republican of Kentucky, around how to proceed with the trial. He has steadfastly refused to commit to calling witnesses, but as majority leader, he must also weigh the wishes of a small group of moderate Republicans who may press to hear from them.

Democrats quickly seized on Mr. Bolton’s public declaration to press their case that the Senate must hear from him and the other senior officials at the outset of any trial, training attention on the few Republicans who have said they are open to calling witnesses.

“Given that Mr. Bolton’s lawyers have stated he has new relevant information to share, if any Senate Republican opposes issuing subpoenas to the four witnesses and documents we have requested, they would make absolutely clear they are participating in a cover-up,” the Democratic leader, Senator Chuck Schumer of New York, said in a speech on the Senate floor.

But Mr. McConnell appeared unmoved by the development, and there was no immediate clamor from rank-and-file Republicans for him to change his stance. Instead, the loudest voices in the party on Monday were from a group of Republican senators who spent the day trumpeting a newly introduced resolution that would alter Senate rules to allow the chamber to dismiss the House case without a trial.

It was unclear how the White House would respond to Mr. Bolton, who left his post in September amid sharp disputes with Mr. Trump. The president did not address his former adviser in an interview with Rush Limbaugh, the conservative talk radio host, that aired on Monday, but he accused Democrats of trying to “affect the election illegally” by impeaching him.

Mr. Bolton did not say precisely what he would be willing to tell Congress. But his lawyer, Charles J. Cooper, told the House’s top lawyer in November that Mr. Bolton knew about “many relevant meetings and conversations” connected to the Ukraine matter that had not been shared with House impeachment investigators. And former White House officials and people close to Mr. Bolton have indicated that his testimony would most likely be damning to Mr. Trump and put additional pressure on moderate Republicans to consider convicting him.

While that could cause some Republican defections, it is unlikely to put him at great risk in the Senate, where a two-thirds vote — 67 senators — is needed to remove a president. Mr. McConnell has confidently predicted Mr. Trump’s acquittal.

The two parties have been at an impasse over the issue of witnesses for weeks now, and the dispute has delayed the start of Mr. Trump’s trial. Speaker Nancy Pelosi, Democrat of California, has declined to send the Senate the charges against Mr. Trump, which would prompt the start of the trial, saying that she first wants assurances that Mr. McConnell would run a fair process.

Mr. McConnell argues the Senate should not even consider admitting new information in the trial until after it hears opening arguments from the prosecution and the defense. He addressed the only development obliquely in a speech on Monday afternoon, accusing Democrats of trying to “pre-commit the Senate to redoing House Democrats’ slapdash work for them, and pursuing avenues” that the House did not.

“The Senate has a unanimous, bipartisan precedent for when to handle midtrial questions such as witnesses: In the middle of the trial,” Mr. McConnell said.

The matter is all but certain to come to a vote at some point, and under Senate rules, it takes only 51 senators to call a witness or request new evidence, meaning Mr. McConnell’s ability to call the shots is limited. Democrats are focused on persuading moderate Republicans — like Senator Susan Collins of Maine, Senator Lisa Murkowski of Alaska and Senator Mitt Romney of Utah — to join them in insisting on witnesses.

Mr. Romney told reporters on Monday that hearing from Mr. Bolton would be a “good thing” that he hoped would come to pass, though he declined to commit to voting for a subpoena until the shape of the trial was clear. Ms. Collins said that she would make determinations about witnesses only after the Senate heard opening arguments in the eventual trial.

Ms. Murkowski said she, too, agreed with Mr. McConnell’s position and would prefer to wait to address the need for witnesses until midtrial, as was done in the 1999 impeachment of President Bill Clinton.

Despite Mr. Bolton’s offer, many Republicans made clear they were opposed to hearing from any new witnesses. Senator Marco Rubio of Florida wrote on Twitter that the Senate should only consider “the same testimony & evidence the House relied upon when they passed the Articles of Impeachment.”

“Our job is to vote on what the House passed, not to conduct an open ended inquiry,” he tweeted.

Senator Josh Hawley, Republican of Missouri, went further, introducing a long-shot resolution to allow the Senate to dismiss the articles of impeachment if the House failed to deliver them within 25 calendar days.

“If Speaker Pelosi is afraid to try her case,” Mr. Hawley said, “the articles should be dismissed for failure to prosecute and Congress should get back to doing the people’s business.”

If he did appear under oath on Capitol Hill, Mr. Bolton would be the closest adviser to the president to answer questions about what Mr. Trump said behind closed doors as he pressured the Ukranians to investigate his political rivals as he was withholding nearly $400 million in military aid from the country.

The Democratic-led House impeached Mr. Trump last month for abuse of power and obstruction of Congress, charging him with a corrupt scheme to solicit help from Ukraine in the 2020 election and concealing his actions from Congress.

The president has repeatedly sought to block his most senior aides, as well as former advisers who have left the White House, from speaking to Congress, and has gone to court to stop several of them from cooperating.

Mr. Bolton’s statement strongly suggested that he would be willing to testify regardless of whether Mr. Trump sought to prevent him, and even in the absence of a legal ruling compelling him to do so.

“It now falls to the Senate to fulfill its constitutional obligation to try impeachments, and it does not appear possible that a final judicial resolution of the still-unanswered constitutional questions can be obtained before the Senate acts,” Mr. Bolton wrote. “Accordingly, since my testimony is once again at issue, I have had to resolve the serious competing issues as best I could, based on careful consideration and study.”

Although Mr. Bolton never spoke with House investigators, his aides testified that he had been deeply concerned about how Mr. Trump and his personal lawyer Rudolph W. Giuliani pressured the Ukranians to investigate Democrats. A top former deputy said Mr. Bolton alluded metaphorically to a “drug deal” that some top White House officials were involved in regarding the investigations, and called Mr. Giuliani “a hand grenade who’s going to blow everybody up.”

Others described a campaign by Mr. Bolton to persuade Mr. Trump to release his hold on the military assistance for Ukraine, a case he made to the president at one point.

Mr. Bolton had previously said he would abide by the ruling of a federal judge in a separate lawsuit by his former deputy, Charles M. Kupperman, over whether to appear as requested in the House impeachment inquiry or comply with a White House directive to stay silent. But House Democrats withdrew their subpoena for Mr. Kupperman, arguing that they did not have time to await the outcome of a potentially yearslong lawsuit before moving to impeach Mr. Trump.

The judge ruled late last month that the issue was moot, which Mr. Bolton said left him no choice but to make his own decision.