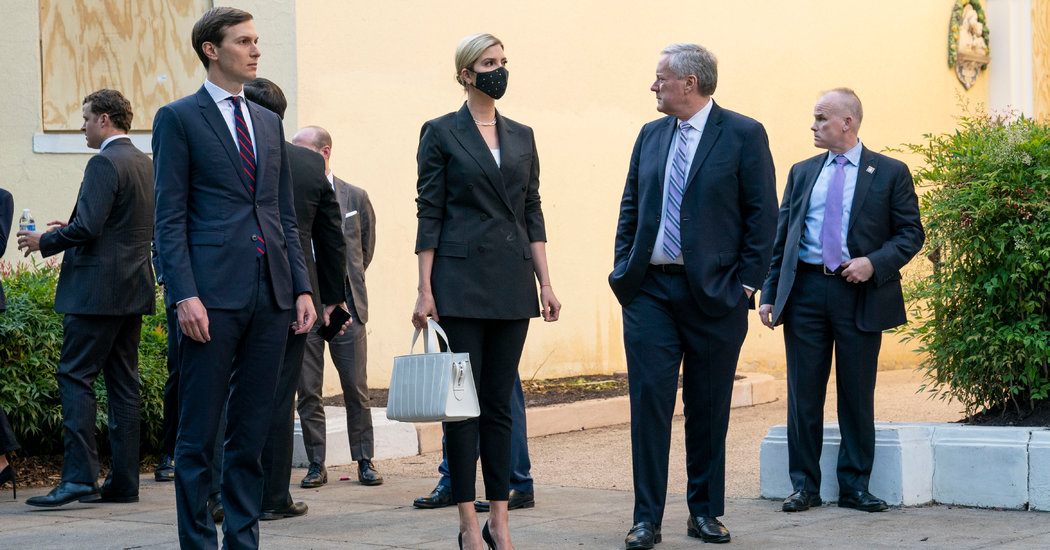 WASHINGTON — My mom always spelled out I Street as Eye Street when she addressed mail there, so it wouldn’t be confusing.

Last Saturday night, the eyes of the world were on Eye Street, where The Times’s office is located, as the street became a hellscape of American pain, going up in flames during protests fanning out from the White House.

I kept thinking about the small yellow church around the corner, known as the “Church of Presidents,” where Madison paid the rent and Lincoln sat in a pew in the back. It was just a few years ago that Barack Obama and his family sometimes attended church there. A week ago, there was a towering bonfire in front of the church and then a fire in the basement.

How could we possibly, in a brief stretch, have gone from the euphoria of our first black president to the desolation of racial strife ripping apart the country?

I was so happy the day of Obama’s inauguration because it was the first time I had seen my hometown truly integrated. Armed with a bag of croissants and a bottle of Champagne, I made my groggy houseguests get up at 4 a.m. the next day, so we could watch the new era dawn at the Lincoln Memorial.

Beyoncé’s security turned us away — the singer had performed the night before and the guards were still there — but it didn’t matter. We caught a glimpse of Abe in the pink light as the Obama family settled into their new home.

I’ve always cherished Washington’s luminous monuments. So it was excruciating this past week to see the chucklehead who has waged war on our institutions, undermined our laws and values, stoked division at every turn, blundering around defiling the monuments that symbolize the best about America.

After the country was rocked to its soul by the sight of a handcuffed black man dying while being held down by a police officer as those around begged for mercy, Trump could hardly summon a shred of empathy. His only move was to grab a can of kerosene and cry “Domination!”

Turning the American military against Americans was a scalding tableau that was a nadir even for the former military school bully. The creepy William Barr, who gets to be called “General,” had troops clear out mostly peaceful protesters so Trump could walk through Lafayette Park, preening as a fake tough guy, and pose in front of St. John’s. Ivanka went into her luxe purse to hand him his prop, a Bible, which he held up awkwardly. It’s a wonder his hand did not burst into flames.

That night, the sound of summer in Washington was a Black Hawk helicopter shadowing the protesters.

This misuse of the military and the sight of the chairman of the Joint Chiefs of Staff, Mark Milley, walking in camouflage while protesters were blasted with chemicals, at long last spurred Jim Mattis to push back. Mattis wrote to The Atlantic that he was “angry and appalled” at Trump for making “a mockery of our Constitution.” He suggested that we all just move beyond the depraved divider if we are to have any hope of uniting the country.

The brutish scene conjured Tuesday at the Lincoln Memorial, with National Guard troops in rows on the steps below the Great Emancipator, was unconscionable. Soldiers ominously stood on the hallowed ground where Marian Anderson sang in 1939 when the Daughters of the American Revolution would not let her perform at Constitution Hall because she was black, and where Martin Luther King Jr. made his “I Have a Dream” speech in 1963. Trump tweeted Wednesday that he had done more for black Americans than any president “with the possible exception of” Lincoln.

On Friday, Trump was so giddy about the surprisingly good jobs report that he mused about getting an R.V. so he and Melania could drive to New York. Cue “Green Acres.” Since even a man killed by the police should offer Pence-like praise of Dear Leader, Trump blithely observed, “Hopefully, George is looking down right now and saying, ‘This is a great thing that’s happening for our country.’”

That afternoon, as protesters in front of St. John’s danced to Sister Sledge’s “We Are Family,” the president threw racial chum in the Potomac. He tweeted that Drew Brees “should not have taken back his original stance on honoring our magnificent American Flag. OLD GLORY is to be revered … NO KNEELING!”

He called Muriel Bowser, the poised black mayor of D.C. who wanted the federal troops out of the capital, “incompetent” and then upgraded her to “grossly incompetent.” Friday night, he retweeted someone who posted that “Barack Obama put a target on the back of every cop in this country.”

It’s sad to see the tall black fences going up around the White House, turning the “People’s House” into an outpost as dark as the psyche of the man who lives within. But Bowser offered the best troll on the First Troller when she had the words “Black Lives Matter” painted in yellow in front of the White House and St. John’s. She tweeted that she was renaming the area “Black Lives Matter Plaza.”