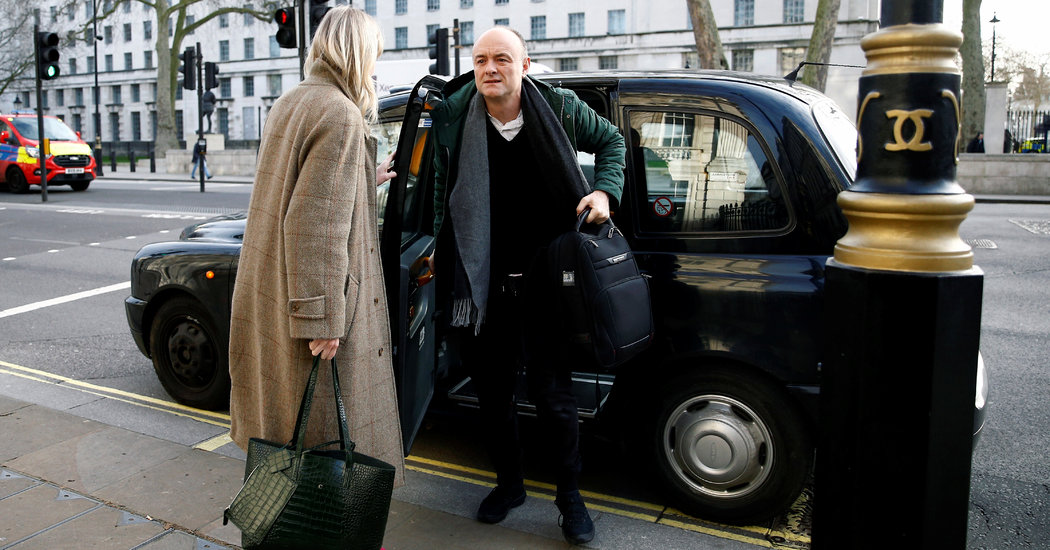 LONDON — The British government came under heightened pressure to disclose details about a secretive scientific advisory group after a report on Friday that a top political aide to Prime Minister Boris Johnson had taken part in the group’s meetings on the coronavirus pandemic.

The adviser, Dominic Cummings, as well as a data scientist with close ties to Mr. Cummings, attended a meeting of the Scientific Advisory Group on Emergencies, or SAGE, on March 23, the day Mr. Johnson ordered a lockdown to try to curb the spread of the virus, according to a report in The Guardian.

Mr. Cummings was a major strategist in the 2016 campaign for Brexit and is viewed as one of the masterminds of Mr. Johnson’s landslide election victory in December, when he used the slogan “Get Brexit Done.” The data scientist, Ben Warner, worked with Mr. Cummings on the Brexit “Vote Leave” campaign.

The government has refused to disclose the members of SAGE or publish the minutes of its meetings, citing the security and independence of the scientists. That has raised questions about its role, particularly after the government abruptly shifted its response to the virus in late March from a more relaxed approach to a lockdown that put Britain in line with other European countries.

The latest report added fuel to the fire, with the opposition saying it tarnished the government’s credibility.

“Dominic Cummings has no place on the government’s scientific advisory group on the coronavirus,” Jonathan Ashworth, the Labour Party’s shadow health and social care secretary, said in a statement. “He is a political adviser, not a medical or scientific expert.”

“We should publish the membership of SAGE,” David Davis, a former cabinet minister, said on Twitter, adding that the government should “remove any nonscientist members” and “publish their advice in full.”

Mr. Davis, who was responsible for Brexit negotiations under Mr. Johnson’s predecessor, Theresa May, has a history of hostile exchanges with Mr. Cummings.

The government denied that Mr. Cummings or Mr. Warner were members of the group. In a statement, it said they had merely listened in to its deliberations and occasionally asked questions or offered help in navigating the bureaucracy.

“The scientists who contribute to SAGE are among the most eminent in their fields,” the statement said. “It is completely wrong to imply their advice is in any way not impartial.”

SAGE is composed of experts in fields including epidemiology and behavioral science. They come from labs at Oxford, Cambridge, Imperial College London, and the London School of Hygiene and Tropical Medicine.

The Guardian published what it said was a list of members. Some are well known, like Neil Ferguson, an epidemiologist at Imperial College, who published a report in March that projected an uncontrolled spread of the virus could kill 500,000 people in Britain. That report helped trigger the shift in the government’s response and was influential in shaping the White House’s thinking, as well.

Another member, Jeremy Farrar, an infectious disease expert and the director of the Wellcome Trust, recently told the BBC, “The U.K. is likely to be certainly one of the worst, if not the worst, affected countries in Europe.”

Mr. Cummings has written about his desire to bring more people with backgrounds in math and science into the government. Working in 10 Downing Street, he has continued to exert enormous influence over Mr. Johnson, though like the prime minister, he was himself sidelined by the virus.

Mr. Cummings’s wife, Mary Wakefield, wrote in The Spectator that he was bedridden for 10 days with “high fever and spasms that made the muscles lump and twitch in his legs.”

“He could breathe, but only in a limited, shallow way,” she said.