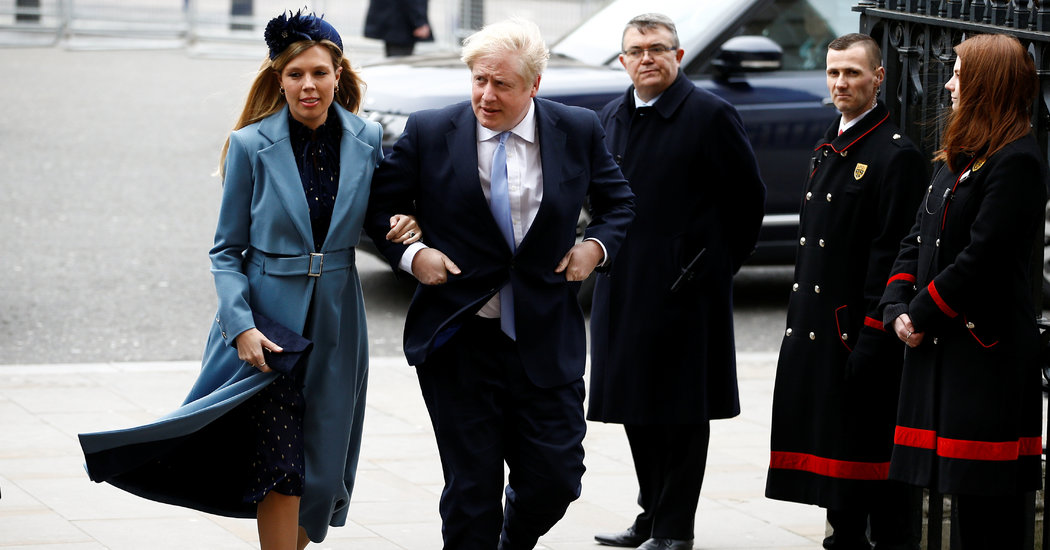 LONDON — Prime Minister Boris Johnson’s life has always had a you-can’t-make-this-up quality to it, never more so than this month, when he went from desperate coronavirus patient, kept alive by oxygen, to the proud father of a baby boy — his fifth, sixth or seventh child, depending on who’s counting.

The announcement by Mr. Johnson and his fiancée, Carrie Symonds, that she gave birth to a healthy baby at a London hospital on Wednesday added a joyful milestone to a year of dizzying highs and lows: an election victory, a divorce, an engagement and a life-threatening illness — not to mention Brexit and a world-altering pandemic, which has killed more than 26,000 people in the country Mr. Johnson leads.

The latest twist in the Boris chronicles deprived political commentators of an important, if less anticipated moment: the prime minister’s first scheduled face-off in Parliament with the Labour Party’s new leader, Keir Starmer, at a time when the government’s handling of the virus has come under intense fire.

Mr. Johnson, who returned to work on Monday, skipped the session because of his son’s birth. Mr. Starmer raised difficult questions about the rising death toll and the lack of testing or protective masks for health workers, but he prefaced them with congratulations to Mr. Johnson, 55, and Ms. Symonds, 32, who also suffered symptoms of the virus but was reported to be healthy.

Mr. Johnson’s understudy — the foreign secretary, Dominic Raab — dutifully defended the government’s performance. He functioned mostly as a reminder of why the prime minister bestrides the British political landscape. Even in his absence, Mr. Johnson was the biggest presence in the room.

“He has this theatrical ability to put himself in the middle of every scene,” said Andrew Gimson, one of Mr. Johnson’s biographers. “All these career politicians look so dreary next to him.”

So far, the prime minister has reaped public sympathy for his illness and good will on the birth of his child. But those sentiments will fade if the government is viewed as having bungled the response to the coronavirus, according to Tim Bale, a professor of politics at Queen Mary University in London.

“You can talk about him as a Teflon politician,” Mr. Bale said, “but Teflon eventually loses its non-stick properties.”

The challenge Mr. Johnson confronts, as he settles back into work, will be leading his country through a grinding monthslong tragedy, in which analysts said his appeals for pluck and optimism may pale next to the human cost of the virus and the economic misery caused by the efforts to suppress it.

On Wednesday, the government recalculated its death toll to include those who died in nursing homes and houses. That drove the number of fatalities to 26,097, one of the highest totals in Europe. British officials noted that on a per-capita basis, the death rate was comparable to its neighbors, except for Germany, which has a much lower death rate.

While Mr. Johnson recuperated from his own bout with the virus, Mr. Raab and other ministers have faced hard questions about why Britain has failed to secure enough masks or gloves for doctors and nurses, seems likely to fall short of a promise to test 100,000 people a day by the end of this month, and has not offered a blueprint for lifting the lockdown imposed on March 23.

During the parliamentary session, known as Prime Minister’s Questions, Mr. Starmer accused the government of being late at every step of the crisis. He noted that the death toll was “dreadful,” and well above the goal of 20,000 set by the government for this phase of the epidemic.

“I’m asking the government to be clear with the public about what comes next,” said Mr. Starmer, who was elected Labour leader last month. “We’d like to support the government’s strategy if we knew what it was.”

The shortage of gloves and masks was dire enough that The Daily Mail, a tabloid that traditionally aligns with Mr. Johnson’s Conservative Party, stepped in to help organize the delivery of 20 tons of gear from China for health workers.

Criticisms that Mr. Johnson was slow to order the lockdown have been compounded by the government’s reluctance to talk about how and when it can be relaxed. In Scotland, the first minister, Nicola Sturgeon, has given more details about her government’s plan and has encouraged the public to wear masks, while ministers in London have continued to deliberate over their use.

On Wednesday, the government said it had the capacity to conduct more than 73,000 tests, though fewer than 53,000 tests were carried out on the last day for which figures were available. That makes it highly likely that the government will miss its target of 100,000 daily tests by at least a couple of days.

For Mr. Johnson, the crisis will complicate being a new father. He is expected to take a short paternity leave but will put it off until later in the year to deal with the epidemic, an official said. He and Ms. Symonds, a former Conservative Party press agent, said in February that they expected the child in early summer.

Downing Street offered no information on the baby’s name, weight or the hospital in which he was born, though officials said Mr. Johnson was present at the birth. The prime minister spent three nights in the intensive care unit of St. Thomas’ Hospital, later thanking the nurses for saving his life.

Mr. Johnson’s talent for engaging and entertaining voters has enabled him to defy political gravity throughout his career. No recent prime ministers have refused to say publicly how many children they have, for example. With four children from his second marriage and possibly two from extramarital relationships, the exact number of his progeny remains a matter of conjecture.

In the past year alone, Mr. Johnson has bounced back after resigning from the previous British government; suffered a landmark legal defeat when he suspended Parliament; ended his second marriage, to Marina Wheeler; and survived the virus.

Mr. Johnson’s resilience and seat-of-the-pants style, some analysts said, might help him navigate an unpredictable crisis.

“His whole life is a preparation for being unprepared, and that isn’t a bad way to be in a crisis,” Mr. Gimson said. “That means he is capable of changing tack quickly.”

But despite Mr. Johnson’s talents, others said the public would be unforgiving if Britain’s death toll ranked at the top of the list in Europe.

“In a year’s time,” Mr. Bale said, “if people realize that the U.K. has done worse than many other countries, no amount of good will can protect a politician.”