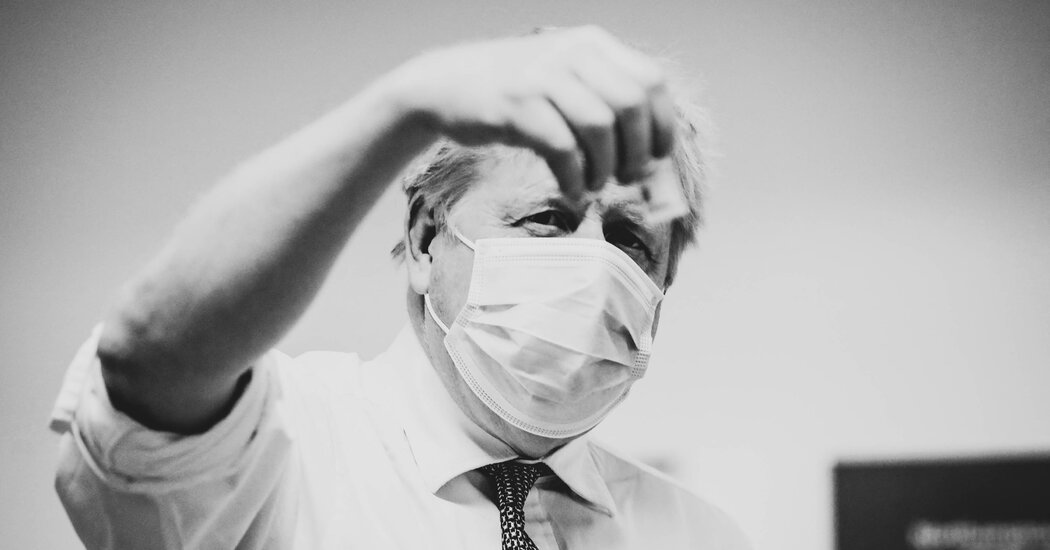 LONDON — Prime Minister Boris Johnson of Britain, bruised by scandal and faced with an alarming rise in coronavirus cases, is refusing to change course. “We have a chance,” he bullishly proclaimed on Jan. 4, “to ride out this Omicron wave without shutting down our country once again.”

Public health experts may disagree. Yet Mr. Johnson is at least being consistent — not only with his conduct throughout the pandemic, where lockdowns were a last resort and restrictions were to be shelved as soon as possible, but also with the political platform that elevated him to the highest office. After all, this is the man who rose to power — bringing about Brexit in the process — on the promise to restore “freedom” and “take back control.”

Undeterred by the pandemic, Mr. Johnson has been quietly pursuing that agenda. But instead of reforming the country’s creaking democracy and shoring up Britons’ rights, he and his lieutenants are doing the opposite: seizing control for themselves and stripping away the freedoms of others. A raft of bills likely to pass this year will set Britain, self-professed beacon of democracy, on the road to autocracy. Once in place, the legislation will be very hard to shift. For Mr. Johnson, it amounts to a concerted power grab.

It’s also an answer. A political chameleon, Mr. Johnson’s true ideological bent — liberal? one-nation Tory? English nationalist? — has long been a subject of speculation. Now he has, beyond any doubt, revealed who he really is: a brattish authoritarian who puts his personal whims above anything else. And whatever his future, Britain will be remade in his image.

Amid the chaos wrought by the pandemic, Brexit tumult and increasing questions about the stability of Mr. Johnson’s individual position, the full scale of the impending assault on civil liberties has — understandably — not yet come into focus for much of the British public. The list of legislation is long and deliberately overwhelming. But pieced together, the picture is bleakly repressive.

First, there’s the Police, Crime, Sentencing and Courts Bill, a draconian and broad piece of legislation that effectively bans protest in England and Wales. The police would be equipped to shut down demonstrations that create “serious disruption.” Those who break this condition, which could be done just by making noise, would face prison sentences or hefty fines. Combined with other measures, such as outlawing traditional direct-action tactics like “locking on,” the bill could eventually make it almost impossible to attend a demonstration without committing an offense.

Yet it goes beyond protest, putting minority groups in the cross hairs. New trespass provisions, which make “residing on land without consent in or with a vehicle” a criminal offense, would essentially erase nomadic Gypsy, Roma and Traveler communities from public life. And the expansion of police powers would not only allow officers widespread access to private education and health care records, but also pave the way for suspicionless stop and search. Ethnic minority communities, disproportionately singled out for police attention, are likely to bear the brunt of such overreach.

Similarly punitive is the Nationality and Borders Bill. Stiffening Britain’s already hawkish immigration policy, it seeks to criminalize asylum seekers who take unsanctioned routes: Refugees who arrive by boat, for example, could face up to four years in prison, regardless of the validity of their claim for safe haven. And if claimants escape traditional jail, they would be kept in concentration camp-style housing and offshore processing centers, sites long denounced by human rights activists.

Not even British citizens are safe from the dragnet. A provision slipped into the bill in November by its architect, the home secretary, Priti Patel, would endow the government with the power to remove British citizenship from dual nationals without notice. Those singled out might not even have recourse to the law: Proposed reform of the Human Rights Act would make it easier for the government to deport foreign nationals and deny them claims of mistreatment.

Such draconian measures, in time, are sure to be contested. But the government has a plan for that: draining the life blood from democracy. There’s the Elections Bill, which — alongside potentially disenfranchising millions through the introduction of mandatory voter ID — aims to furnish the government with new powers over the independent elections regulator, sealing up the political process. Unless substantially amended, the bill’s consequences could be constitutionally far-reaching.

The urge to centralize power also underlies the Judicial Review and Courts Bill, which would enable Mr. Johnson and his ministers to overrule judicial review findings that challenge their agenda. The Online Safety Bill, ostensibly designed to regulate Big Tech, is yet to be introduced to Parliament. But many free-speech advocates fear that it could be used to silence critics on social media, censoring those reporting details Mr. Johnson’s government would rather keep from public view. No more pesky judges or overly inquisitive journalists interfering with government business.

It’s a truism that nations sleepwalk into tyranny, and England — the most politically powerful of the nations comprising Britain — is no exception. For decades it has possessed all the necessary ingredients: ever more spiteful nationalism, press fealty sold to the highest bidder and a fervent, misplaced belief that authoritarianism could never set up shop here, because we simply wouldn’t let it.

In this event, though, concerted opposition to Mr. Johnson’s plans has not materialized. Establishment politics have been no match for the determination of Mr. Johnson and his allies: A hefty and largely supportive Conservative majority means that even when the Labour Party has decided to oppose legislation, its votes have barely counted. And despite valiant efforts by a coalition of grass-roots groups and the initial groundswell of the “Kill the Bill” protests, a mass movement opposing these bills has failed to come together. Instead, a miasma of grim inevitability has settled in.

That’s dangerous, not least because this authoritarian assault is so comprehensive that once settled as law, it will prove very tricky to unpick. Like many leaders who seek to transcend the constraints of democracy, Mr. Johnson may not foresee a future where he isn’t the one calling the shots. But the miserable shadow his power grab will cast over Britain is likely to last far longer than the tenure of the would-be “world king” himself.

His place in the history books, however, is secured. He will forever be the libertine whose pursuit of personal freedom and “control” saw his countrymen robbed of theirs.

Moya Lothian-McLean (@mlothianmclean) is the politics editor at gal-dem magazine and a freelance journalist.