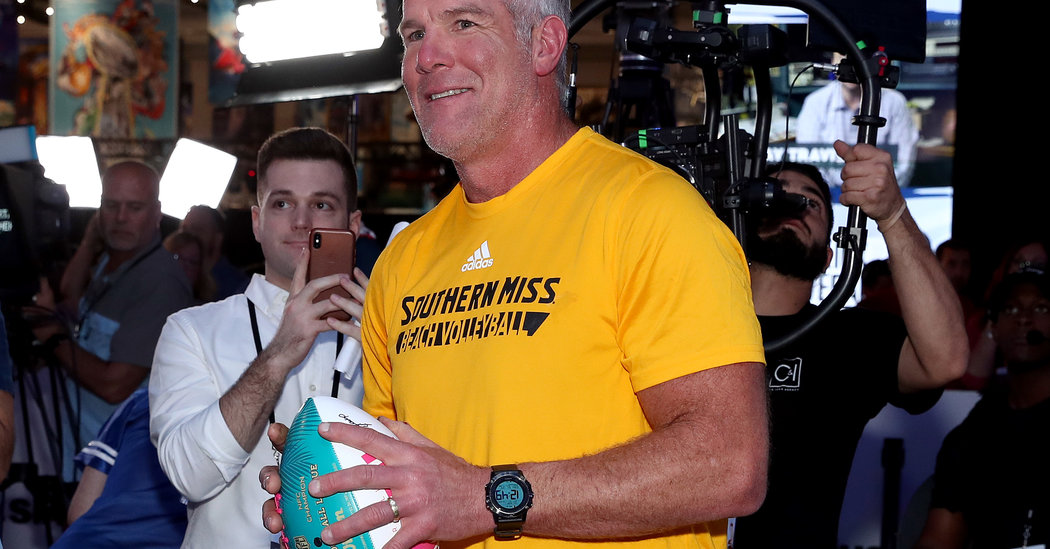 The Hall of Fame quarterback Brett Favre will repay the state of Mississippi $1.1 million in speaking fees for appearances that he has never made, money that should have gone to needy families but was misspent by public officials, the state auditor said on Wednesday.

The auditor, Shad White, said that his office had received a $500,000 payment from Mr. Favre on Wednesday and that Mr. Favre, who is from Mississippi, had agreed to pay the balance in installments in the next few months.

He said that Mr. Favre, 50, had no knowledge that the payments that he received in December 2017 and June 2018 from the nonprofit Mississippi Community Education Center had been funded with federal welfare grants.

The nonprofit has been implicated in an extensive fraud scheme involving welfare aid that Mr. White’s office uncovered in a year-end audit. The scheme resulted in criminal charges against six people, including the former director of Mississippi’s welfare agency and three officials from the center. Mr. Favre is not facing charges.

The audit also flagged about $94 million in expenditures from the Temporary Assistance for Needy Families program, or TANF. Mississippi is among the poorest states in the country.

“I want to applaud Mr. Favre for his good faith effort to make this right and make the taxpayers and TANF families whole,” Mr. White said. “To date, we have seen no records indicating Mr. Favre knew that TANF was the program that served as the source of the money he was paid.”

In a series of tweets on Wednesday night, Mr. Favre wrote that he had appeared in ads for a resource center in Mississippi that had been a recipient of welfare grants. He also said that he never received any money for obligations that he did not meet.

“To reiterate Auditors White’s statement, I was unaware that the money being dispersed was paid for out of funds not intended for that purpose, and because of that I am refunding the full amount back to Mississippi,” Mr. Favre said.

Mr. Favre wrote that he had donated nearly $10 million through his Favre 4 Hope charity to help underprivileged and underserved children in Mississippi and in Wisconsin, where he spent most of his career with the Green Bay Packers.

The Mississippi Community Education Center contracted Favre Enterprises to have Mr. Favre appear at several events, record promotions and provide autographs for marketing materials from July 1, 2017 through July 31, 2018, according to the audit.

There was no mention of the contract price in the documents that were provided to state officials, the audit said.

The center provided a list of dates and events, saying Favre Enterprises had fulfilled the contract terms. But state officials said that auditors had determined that Mr. Favre did not speak nor was he present for those events.

In February, the auditor’s office announced criminal charges against the former director of Mississippi’s welfare agency, saying that he took part in a scheme to embezzle millions of dollars for personal use and to pay for a former professional wrestler to go to a luxury drug rehabilitation center.

The director, John Davis, who retired in 2019 from the state’s Department of Human Services, was one of six people charged in what Mr. White said was the largest embezzlement scheme that the office had seen in at least 20 years.

The professional wrestler who went to the drug rehab center, Brett DiBiase, was also charged in the embezzlement scheme. State auditors said that Mr. DiBiase, 31, was paid with welfare funds for teaching classes about drug use, but he never taught those classes because he was being treated for an opioid addiction at the Rise in Malibu rehab center in California.

Five of the six have pleaded not guilty, including Mr. Davis and Mr. DiBiase. Plea information for the sixth person was not immediately available.

Mr. Favre played 20 seasons in the National Football League, most of them with the Packers, with whom he won Super Bowl XXXI in 1997. He also played for the New York Jets and the Minnesota Vikings, and was selected in the N.F.L. draft by the Atlanta Falcons.