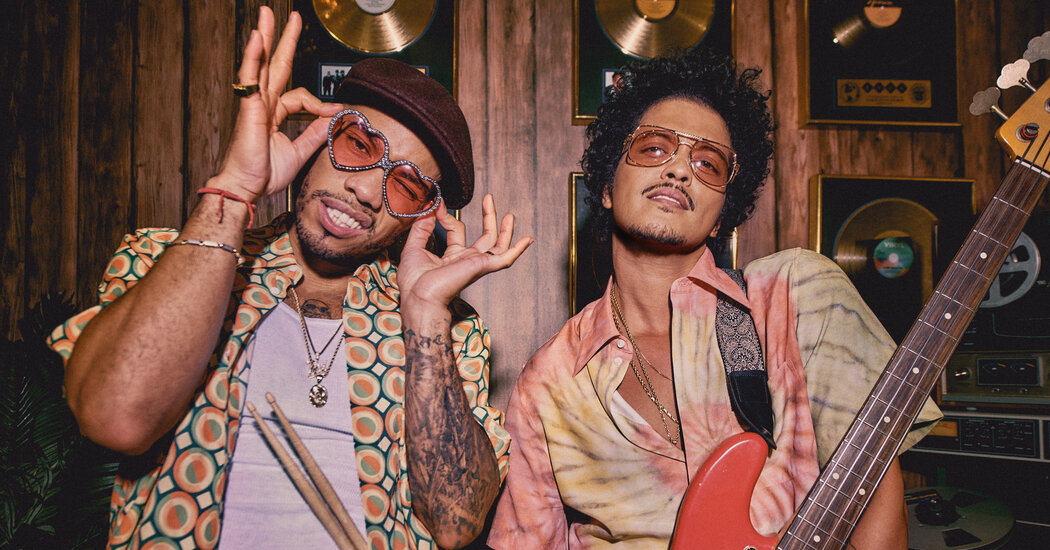 The duo gleefully reverse-engineers the analog-era sophistication of 1970s R&B on a new album, “An Evening With Silk Sonic.”

Anderson .Paak was born in 1986. Bruno Mars was born in 1985. The sound of their new collaborative album, “An Evening With Silk Sonic,” comes from a decade earlier, the 1970s, when the grit and funk of 1960s soul made way for a new embrace of sophisticated luxury.

Singers promised sensual pleasures, sharing ardent come-ons and velvety harmonies in opulent tracks, backed by bountiful strings and horns. Working together as Silk Sonic, Mars and Paak revisit that bygone analog era in a hybrid of homage, parody, throwback and meticulous reverse engineering, tossing in some cheerfully knowing anachronisms. They flaunt skill, effort and scholarship, like teacher’s pets winning a science-fair prize; they also sound like they’re having a great time.

Silk Sonic comes across as a continuation for Mars and a playfully affectionate tangent for Paak. Mars is a multi-instrumentalist with a strong retro streak. His voice and his verse-chorus-verse songwriting have harked back directly to Michael Jackson, Stevie Wonder, James Brown, the Police and others, as he concentrates on thoughts of seduction, romance and, occasionally, winning someone back.

Paak’s catalog has delved into more complicated matters. On his albums, named after places where he has lived, he switches between singing and rapping, and his lyrics take on contemporary conditions; he’s also a musician steeped in live-band soul and R&B, and a hard-hitting drummer. His songs, like “Lockdown” from 2020, confront the tensions of identity, desire, success, politics, self-expression and repression; Silk Sonic gives him a vacation from those weighty topics. On “An Evening With Silk Sonic,” Paak’s specificity merges with Mars’s pop generalities, while both of them double down on craftsmanship and cleverness.

For an album like this, Silk Sonic can use a co-sign from the elder generation, and the duo gets one from none other than Bootsy Collins, 70, the bassist of Parliament-Funkadelic — the band Mars simulated on the title track of his 2016 album “24K Magic” — and the possessor of the most liquid, self-satisfied speaking voice in the funk cosmogony. He arrives as “Bootzilla himself” on the album’s “Intro to Silk Sonic” and shows up elsewhere as “Uncle Bootsy,” certifying Silk Sonic’s 1970s bona fides by his sheer presence.

Most of “An Evening with Silk Sonic” revives the sound of 1970s groups like Earth, Wind & Fire, the Spinners, the Manhattans, the Chi-Lites and the Delfonics. Mars and Paak take turns delivering gritty, acrobatic lead vocals and layering on elaborate backups: creamy supportive harmonies, eager call-and-response, perky falsetto oohs.

The production, by Mars and D’Mile (who has lately worked with H.E.R. and Lucky Daye), brings back all the instrumental flourishes of the analog era: wind-chime glissandos, wah-wah guitars, electric sitar. Only one song has a credit for “programming”; the rest of the album, presumably, was played by hand, in vintage style. “Put on a Smile” caps its confession of desperate heartache with the sounds of a thunderstorm, a nod to the “quiet storm” radio formats of the 1970s. And the song structures revel in thick chromatic chords and rising, uplifting key changes — especially “Blast Off,” the album’s finale, which dreamily, repeatedly ascends as Mars asks, “Can we take it higher?”

Between the ballads, Silk Sonic switches to funk. Driven by Paak’s assertive drumming, “Fly as Me” and “777” invoke James Brown by way of Parliament. They span eras by including some rapping — though Paak announces, in “Fly as Me,” that he’s “hollering from a 1977 Monte Carlo.”

The distance between the 1970s and the 2010s also shows up in slightly rougher language and more openly materialistic lyrics. “Smokin Out the Window” is a bitter but still lovelorn song about a gold-digger ex — the lyrics use a stronger word — that has the singer “smokin’ out the window of my Benz.” And in “Put on a Smile,” Paak blends his tearful nostalgia with a designer-brand boast: “If I could turn back the hands of my Rollie, you know I would,” he sings, referring to his Rolex.

All in all, “An Evening with Silk Sonic” is a Fabergé egg of an album: a lavish, impeccable bauble, a purely ornamental not-quite-period piece. Mars and Paak don’t pretend to be making any grand statement, but there’s delight in every detail.