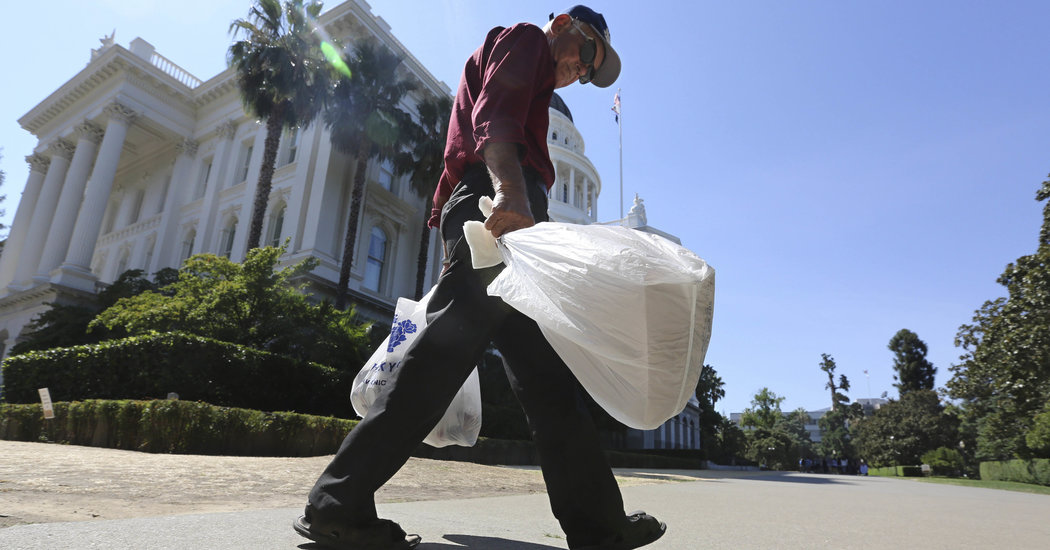 Retailers in California can once again hand out free single-use plastic bags under an executive order announced on Thursday by Gov. Gavin Newsom, the latest turn away from reusable bags amid the coronavirus outbreak.

The order permits stores to provide customers with disposable plastic bags for the next 60 days. “It is critical to protect the public health and safety and minimize the risk of Covid-19 exposure for workers engaged in essential activities, such as those handling reusable grocery bags,” it states.

The suspension of the ban was vigorously championed by the California Retailers Association and the California Grocers Association, which have asserted that reusable bags put supermarket employees at risk of being infected with the coronavirus. Since California’s plastic bag ban passed in 2016, providing shoppers with thin, single-use plastic bags has been prohibited in the state. If shoppers fail to bring their own bag, stores have been required to charge them at least 10 cents for a paper or reusable bag.

In a letter to Mr. Newsom last month, the associations requested a suspension of the plastic bag ban until Covid-19 is no longer a significant threat to the state. “This is a laudatory environmental policy, but it is simply not appropriate to expect our employees to handle and load customers’ used grocery bags at this time,” the groups wrote.

Mark Murray, executive director of Californians Against Waste, said he believed that there was a superior alternative to suspending the ban: encouraging customers to bag their own groceries. That approach, he noted, has been endorsed by the state’s Division of Occupational Safety and Health.

So long as customers do this, “reusable bags are perfectly safe, and pose zero threat to store employees and other customers,” he said in an email. He said he believed that while retailers had good intentions, they were inflicting a “costly and unnecessary wound” on themselves as well as the environment by discouraging reusable bags and agreeing to give out plastic bags at no cost. In 2007, a decade before the bag ban, California grocers distributed around 68 million single-use bags — a vast majority of them plastic — a day, he said.

California is only one of many states that are changing their tune on plastic bags amid concerns that reusable bags may help spread the virus. In March, Gov. Janet Mills of Maine postponed the state’s ban on single-use plastic bags, which was supposed to go into effect this month, to next January. Oregon and New York have also delayed statewide bag bans.

Some cities and states, including San Francisco and New Hampshire, have taken it a step further, temporarily banning reusable bags altogether. (Under Mr. Newsom’s executive order, customers can choose to continue to use reusable bags, except in counties that have explicitly prohibited their use, according to Ronald Fong, chief executive of the California Grocers Association.)

Some say that the plastic bag industry, battered by a wave of bans nationwide, has been exploiting the coronavirus pandemic to sow unfounded fears of reusable bags.

There is no doubt that risks to supermarket employees are real; at least 30 across the country have died as a result of the coronavirus, according to United Food and Commercial Workers International Union. But groups like the Ocean Conservancy say there is no evidence that returning to single-use plastic is the way to protect anyone’s health.

“Right now, the data indicate that the coronavirus actually persists longer on plastics than on other materials,” the organization wrote in a recent blog post. “This suggests that bags made of paper are likely to be less risky than those made of plastics.”

The conservancy also pointed out there was no research to support the idea that reusable bags are any more contaminated than other supermarket surfaces.

Scientific data about the risks of reusable bags is scarce. One frequently cited study found that reusable plastic bags can contain bacteria and that users rarely wash reusable bags. The study was funded, however, by the American Chemistry Council, which represents major plastic and chemical manufacturers.

The widely shared figure that the new coronavirus can survive up to three days on some surfaces comes from a study published last month. But the researchers focused on plastic and cardboard, not fabric.

In some parts of California, the plastic bag ban may persist; the executive order does not apply to around 150 jurisdictions with their own local restrictions on single-use carryout bags. Mr. Fong of the California Grocers Association said that he hoped those localities would comply with the executive order anyway.