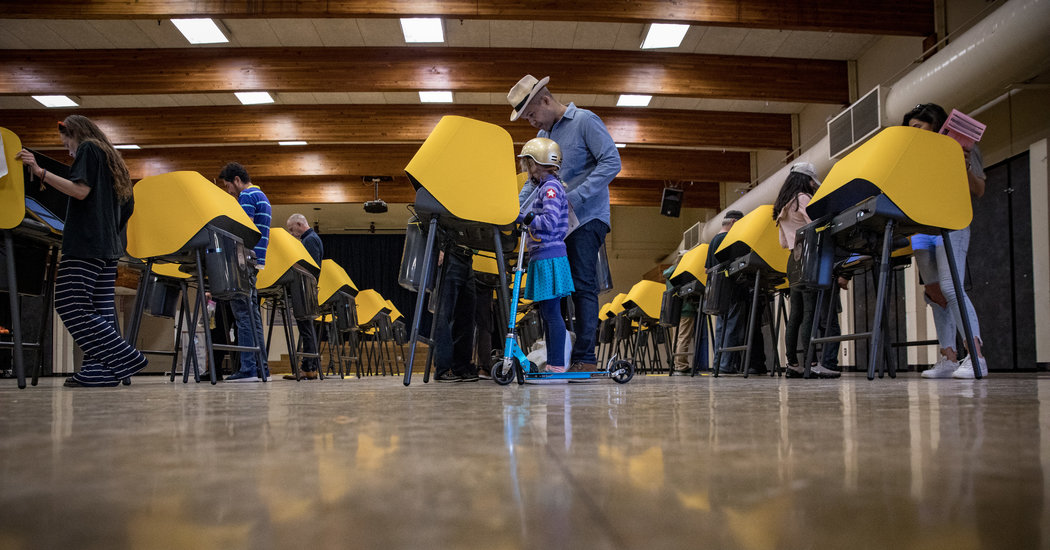 Gov. Gavin Newsom of California on Friday ordered ballots to be sent to the state’s 20.6 million voters for the November election, becoming the first state to alter its voting plans for the general election in response to the public health concerns wrought by the coronavirus pandemic.

While California has greatly expanded its vote-by-mail operation in past elections — roughly 65 percent of the state voted by mail in the 2018 midterm elections — the decision by the largest state in the country to greatly reduce in-person voting is a recognition by state officials that the coronavirus outbreak is unlikely to subside by the fall.

“There’s a lot of concern and anxiety around this November’s election in terms of making sure that you can conduct yourself in a safe way and to make sure that your health is protected,” Mr. Newsom said at a news conference on Friday. But, he added, “we still want to have the appropriate number of physical sites for people to vote as well.”

Mr. Newsom said officials would be working in the next “days and weeks” to determine how in-person voting would be conducted in November. That responsibility will largely fall to county officials, who must find larger polling places and will have to eliminate senior centers and retirement homes that have long served as sites.

During an online fund-raiser for Joseph R. Biden Jr. Friday evening, Mr. Newsom said he hoped the move would “inspire others across the country’’ and specifically added “including Red states’’ to follow suit, according to a pool report. Mr. Biden then praised him, saying “you’re also protecting the cornerstone of our democracy, the right to vote.”

Mr. Newsom formally endorsed Mr. Biden’s candidacy, saying “I’m so honored to be here with you and supporting your presidency.’’

In shifting to a broader vote-by-mail system, California is trying to avoid the public health debacle wrought by the April 7 elections in Wisconsin, where voters and poll workers weighed the health risks of congregating en masse during a pandemic with their right to vote.

States around the country have sought to expand their vote-by-mail operation for primary elections. In New York, Gov. Andrew M. Cuomo ordered postage-paid ballots sent to every voter for the primary, and the Ohio primary on April 28 was conducted nearly entirely through absentee ballots.

“This is the smartest, most healthy way to be able to exercise the right to vote,” said Alex Padilla, the secretary of state, who has been urging other states to adopt similar policies. “All the things that we need to do to prepare for an accessible election needs to begin happening now.”

The move was widely expected among California officials, who are overwhelmingly Democrats and have supported expansive voting rights, including same-day voter registration they are eager to preserve. In the early weeks of the pandemic, Mr. Newsom signed an order to mail ballots to all registered voters in the 25th Congressional District, where a special election will be held next Tuesday.

In that race, so far, Republicans are mailing back ballots at a much higher rate than Democrats, who have a higher number of registered voters in the district overall. As of Friday, roughly 38 percent of Republicans had already cast their vote, compared to 25 percent of Democrats, according to tracking data.

Though the Republican National Committee has objected to other state’s attempts to mail ballots to every voter, any effort to overturn Mr. Newsom’s order could be difficult, both politically and legally.

Though voter fraud is exceedingly rare in the United States, the Trump campaign has continued to push a false narrative about vote-by-mail fraud. They continued that argument in a statement to CNN on Friday night, attempting to paint Mr. Newsom’s executive order as a “thinly-veiled political tactic to undermine election security.”

The California Republican Party echoed the president’s comments, questioning the election’s integrity in a statement and claiming that the vote-by-mail plan “is not a task that these Democrats can adequately manage or safely execute.”

“We need more assurances that this election will be safe, fair and monitored to ensure the accurate and timely results Californians deserve,” said Jessica Millan Patterson, the chairwoman of the California G.O.P. The statement also called on the governor to “stop the practice of ‘ballot harvesting,’” a term for collecting ballots in person. There is no indication that the practice would continue under social distancing measures.