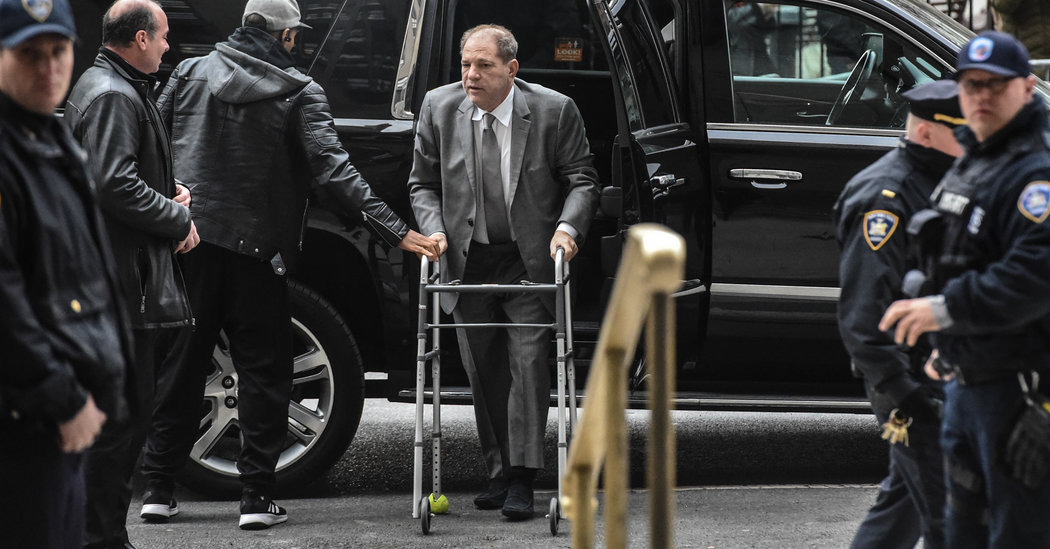 The actresses Salma Hayek, Rosie Perez and Charlize Theron were among the people that a judge said on Tuesday might be called as witnesses or mentioned in testimony during the rape trial of the movie producer Harvey Weinstein.

The actresses’ names appeared on lists of possible witnesses provided to the judge as jury selection started in State Supreme Court in Manhattan. The lists provided a rough cast of characters for the trial and also included several of Mr. Weinstein’s business partners and employees, among them his brother, Robert Weinstein.

It remained unclear how many of the people on the lists would be called as witnesses at trial or would simply be named in testimony. Six women are expected to testify about their allegations that Mr. Weinstein sexually assaulted them, but only two have been identified by the prosecution.

The names of the 90 potential witnesses became public as it became clear how hard it would be to find an impartial jury. A third of the 120 potential jurors on Tuesday asked to be excused, saying they could not be fair. Those who told the judge they had their minds made up about Mr. Weinstein varied in age and ethnicity. Twenty-four were women.

The trial of Mr. Weinstein, 67, is one of the most anticipated proceedings in recent years. Allegations against him helped ignite the global #MeToo movement, a reckoning over sexual assault and harassment by powerful and influential men in the workplace.

First two days of proceedings have had moments of drama. Before jury selection began, the judge overseeing the trial, James M. Burke, issued a sharp rebuke to Mr. Weinstein, threatening to jail him for using two cellphones in the courtroom despite previous warnings to put the devices away.

“What did I say would happen if he so much has a cellphone or electronic device since there have been repeated violations of this, including some on the record?” Justice Burke said as he took the bench.

One of Mr. Weinstein’s lawyers, Arthur Aidala, appeared taken aback: “You said you never want to see a cellphone in my client’s hand.”

The judge then reminded Mr. Weinstein that his bail would be revoked and that he would be jailed during his trial if he did not stop using his telephone. “Is this really how you want to end up in jail for the rest of your life, by texting and violating a court order?” the judge said.

Minutes later, prosecutors asked for Mr. Weinstein to be held in jail without bail in light of rape and sexual assault charges that were filed in Los Angeles on Monday. The judge rejected the request.

Twelve jurors and six alternates will ultimately decide Mr. Weinstein’s fate in New York. Opening arguments in the case are expected to start on Jan. 22, with the trial concluding by March 6.

Prosecutors charge that Mr. Weinstein raped one woman, who has not been identified in court documents, at a Midtown hotel in March 2013 and forced oral sex on a second woman, Mimi Haleyi, a production assistant, at his apartment in Manhattan in 2006. He also faces a charge of predatory sexual assault for allegedly having committed a serious sex crime against more than one person.

Mr. Weinstein maintains that his sexual encounters with the women were consensual.

Mr. Aidala said the charges announced in Los Angeles would make it challenging to find impartial jurors in New York. Prosecutors in California accused Mr. Weinstein of raping one woman and sexually assaulting another over two days in February 2013.

“For a prosecutor, this is Christmas morning, more prejudice against the defendant you’re trying to prosecute,” Mr. Aidala said. “And to say there was no coordination — it’s very hard your honor — to believe that was an absolute coincidence.”

On Tuesday afternoon, 36 of the potential jurors who told the court they could be fair to Mr. Weinstein were told to complete a 16-page questionnaire. They were asked, among other things, if they had heard about the case in the media, and if that information would affect their ability to be fair and impartial.

The people were also asked if they or someone they know had ever been the victim of physical or sexual assault.

During the selection process, Justice Burke read aloud the names of people whom the prosecution and defense said they might call as witnesses or mention in testimony.

The names included some of Mr. Weinstein’s accusers, like Ms. Haleyi, who will testify, but others had no known connection to the allegations at the heart the case. Ms. Theron, for instance, recently said Mr. Weinstein had spread rumors about them having sex, but has not accused him of other wrongdoing. Ms. Hayek wrote an essay in 2018 that accused him of sexual harassment without providing details. She called Mr. Weinstein “my monster.”

The lists also included Annabella Sciorra, the actress known for her work in “The Sopranos,” and her friend, Ms. Perez. The prosecution has said it plans to call Ms. Sciorra to testify about her allegation that Mr. Weinstein sexually assaulted her in 1993 in her Gramercy Park apartment. Ms. Sciorra later told Ms. Perez about the alleged incident, making her a possible witness, according to The New Yorker.

Spokespeople for Ms. Hayek, Ms. Perez and Ms. Theron did not immediately respond to requests for comment.

Mr. Weinstein’s brother, Robert, who has acknowledged he was aware of allegations of sexual misconduct against the producer for years, was also named.

The prosecution listed several of Mr. Weinstein’s former business associates, who have said in recent years that they were concerned about his behavior. The jury may hear, for instance, from Irwin Reiter, Mr. Weinstein’s corporate accountant of 30 years, who has said he became so troubled by the producer’s conduct that he supplied records to The New York Times about allegations of misconduct.

A former member of the Weinstein Company board, Lance Maerov, was also mentioned. He has said he was troubled by accusations against Mr. Weinstein in 2014 and 2015.

The defense lawyers had submitted a list of possible witnesses that included the lead detective who worked on the case, Nicholas DiGaudio, who has been accused of misconduct, as well current and former Manhattan prosecutors.