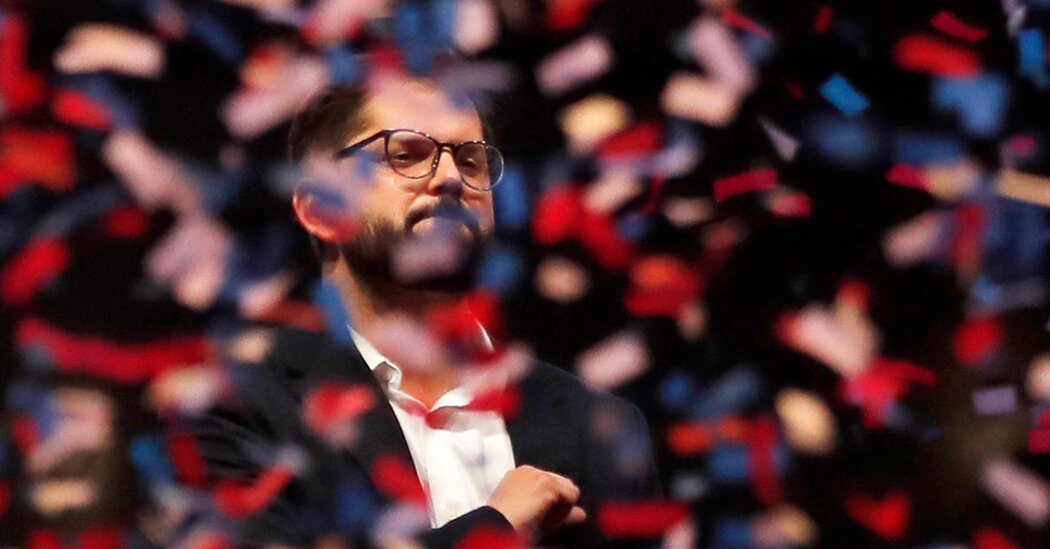 The refrain took on a life of its own, and all week Chileans, on social media and on the streets, repeated it, if only to serve as a reminder that fear-mongering and polarization should have no place in electoral politics.

But hope alone will only get Mr. Boric so far. The 35-year-old leader immediately faces the challenge of helping those struggling in a Covid economy, including older Chileans crushed by meager or no pension benefits. But the biggest test of his presidency, the one that will not only cement his place in Chilean history but define society in a post-dictatorship nation, will be his leadership ahead of a referendum next year on a new Constitution that would enshrine rights and values for a more equal, inclusive nation and break with the charter birthed under Augusto Pinochet.

In 2020, Chileans voted overwhelmingly to leave the old text behind, and less than a year later, they selected 155 drafters to write the new one. But weariness from the pandemic, funding controversies, and frictions over procedure and substance inside the constitutional convention — the body tasked with drafting the charter — could easily erode its public support. And if those are the challenges now, there’s no telling what challenges lie ahead once the framers approve the text of the new Constitution and it is up to the citizenry to debate and ratify it. A torrent of fake news around the constitutional process shows that bad actors are hard at work seeking to delegitimize it.

Any misstep in the process could undermine the credibility of a new Constitution — and provide fodder for supporters of the old order, including figures like Mr. Kast, to rally around rejecting it.

This is do-or-die for Mr. Boric.

With history as a guide, Mr. Boric starts off with reason to hope that Chilean society, at a pivotal moment for its democratic project, will choose wisely. Mr. Boric was only 2 years old when Chileans, in a historic plebiscite in 1988, rejected the military rule of Mr. Pinochet, setting Chile on a path to democracy and self-determination. Then, nearly 56 percent of voters said no to the dictator’s brutal regime, opening the door to a modern era of democracy and institutional growing pains.

More than 30 years later, by a similar margin, Mr. Boric’s message of hope and change prevailed over Mr. Kast’s dire warnings that Chile was on the precipice of abandoning this political and economic model, and descending into Communism. Fifty-six percent of the Chilean electorate rejected that message and voted for Mr. Boric, making him the youngest president to reach La Moneda, Chile’s presidential palace, and the candidate to receive the highest number of votes in a presidential contest in the nation’s history. Turnout likewise shattered records. Mr. Boric’s mandate is clear.

Yet the president-elect, for all his youthful energy and commitment to dignity, equality and the internment of neoliberalism, is keenly aware he’ll need more than just rhetoric to govern and make a reality the social promises that propelled him to power. In his same acceptance speech on Sunday, Mr. Boric was candid in his assessment that the future of his campaign promises — among them access to quality health care for all and overhauling Chile’s privatized pension system — will require consensus, meeting others in the middle, and taking “short but steady steps” in the face of a closely divided national Congress.

This is not the discourse of a onetime student leader who cut his teeth organizing marches for better public education and, in the process, found himself in the cross hairs of President Sebastián Piñera’s first administration nearly a decade ago. Mr. Boric’s newfound pragmatism is a promising early sign for the constitutional process, as the approach holds appeal for those voters who are neither highly progressive like him nor far-right sympathizers like Mr. Kast. But as he juggles forming a cabinet and leading a government on one hand, he will also need to blend intellectual rigor, communications skills, and a solemn urgency about future milestones in the constitutional process on the other. Nothing can be left to chance — and every person in his team, no matter their role, must make the new Constitution their true north in everything they do.

Mr. Boric has no room for error in this constitutional moment. After the social protests that rocked and nearly broke Chile in October 2019, he was a key signatory to the document that set in motion the process toward Chile’s new founding charter. Mr. Boric broke from his own party, and risked his own political future, when he took that visionary step.

In the presidential seat, Mr. Boric will have to walk the fine line of championing the new Constitution — which could inevitably circumscribe his own power — and not alienating that part of the electorate that doesn’t share the progressive values of the drafting committee members who themselves are still debating key provisions. These include the enumeration of fundamental rights, the role of government in protecting them, and the state’s responsibilities to Indigenous peoples, political minorities and the environment.

All of these issues can be highly divisive. And they explain why Mr. Boric, during his victory speech, urged all Chileans to guard the constitutional process. The new Constitution, he said, must be one of encuentro — a meeting place where all Chileans agree on fundamental values and agree to disagree on everything else.

Setting this constitutional project on a firm foundation — or to a “safe harbor,” as he put it on Tuesday — is the key to Mr. Boric’s political legacy. His greatest challenge, beyond making it past his honeymoon with voters and responding to specific demands, will be to show that he’s the president of not just the here and now, but also of Chile’s imminent next founding — the first chief executive who’ll chart the nation’s future course based on the first charter ever written by Chileans themselves.

Cristian Farias (@cristianafarias) is a Chilean-American journalist who writes about law, justice, and politics.