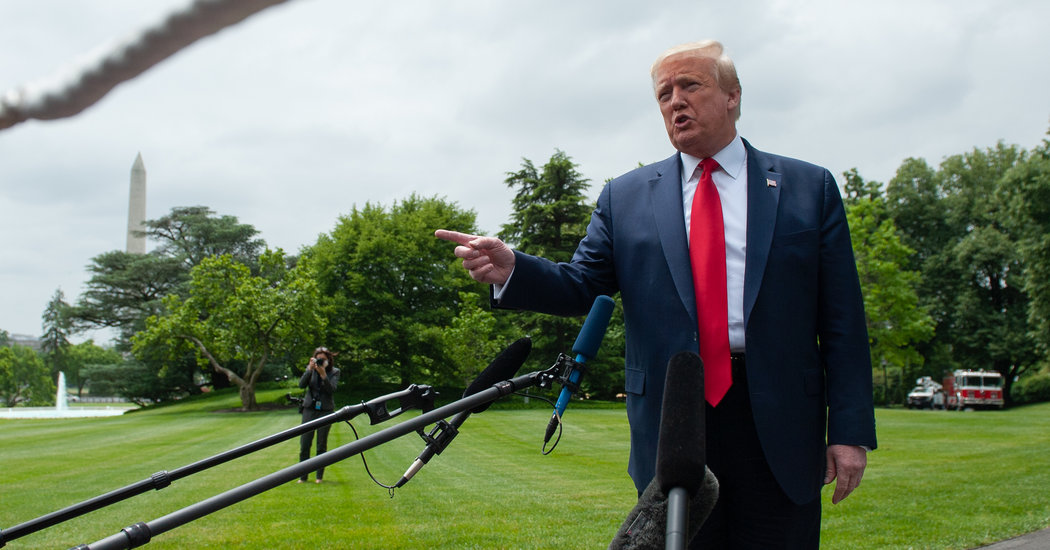 WASHINGTON — China’s plans to impose sweeping new security powers over Hong Kong could inflict even more damage on already fraught relations between Washington and Beijing, and force President Trump into uncomfortable decisions about whether to maintain his self-described friendly ties with the Chinese president, Xi Jinping.

The proposal announced in Beijing on Thursday provoked outrage in Congress, where bipartisan support grew quickly for new sanctions on Chinese officials and entities that Mr. Trump — who has shown limited interest in Hong Kong’s plight and a continued desire to carry out terms of a trade deal with Beijing — may not welcome.

Giving the government broad new powers to crack down on pro-democracy activists could effectively end Hong Kong’s limited independence and crush a protest movement that has agitated for nearly a year against China’s authoritarian Communist Party.

“This move by Beijing would rip away the remaining veneer of ‘one country, two systems.’ It would precipitate a crisis in U.S.-China relations,” said Evan Medeiros, a senior Asia director at the National Security Council under President Barack Obama and a professor at Georgetown University.

“Nationalist voices in the U.S. and China would have a party with this; 2020 is beginning to feel more and more like 1948 when the first crises of the Cold War broke out over Berlin,” Mr. Medeiros said, predicting that the United States and China would probably impose sanctions or other punishments on each other.

The Chinese government, which announced the move, is likely to put it in place by fiat during the National People’s Congress, which begins on Friday. How Mr. Trump will react is unclear.

Leaving the White House for a trip to Michigan on Thursday, he told reporters that he did not know “what it is,” but added, “If it happens, we’ll address that issue very strongly.”

When mass demonstrations against Beijing took place in Hong Kong last summer, Mr. Trump — who has shown little interest in issues of democracy and human rights generally — had a muted response despite bipartisan pressure to show more support for a protest movement with open sympathies for the United States.

And even as he has lashed out at China’s government for its handling of the winter coronavirus outbreak in Wuhan, helping to prompt the sharpest downturn in relations with Beijing in decades, Mr. Trump has taken care not to insult or offend Mr. Xi. Because of the pandemic’s economic toll, China has yet to meet purchasing demands outlined in a January trade agreement between the two nations. Mr. Trump and his economic advisers would like to see the deal fulfilled to aid his re-election prospects.

But in recent months the Trump campaign has increasingly focused on its message of China as a villainous threat to American economic and security interests, while portraying Mr. Trump’s Democratic opponent, former Vice President Joseph R. Biden Jr., as too conciliatory toward Beijing. Mr. Trump has repeatedly muddied that message with his deferential tone toward Mr. Xi.

“Any effort to impose national security legislation that does not reflect the will of the people of Hong Kong would be highly destabilizing, and would be met with strong condemnation from the United States and the international community,” Morgan Ortagus, a State Department spokeswoman, said in a statement on Thursday.

“We urge Beijing to honor its commitments and obligations in the Sino-British Joint Declaration — including that Hong Kong will ‘enjoy a high degree of autonomy’ and that people of Hong Kong will enjoy human rights and fundamental freedoms — which are key to preserving Hong Kong’s special status in international affairs and, consistent with U.S. law, the United States’ current treatment of Hong Kong,” she said.

Secretary of State Mike Pompeo has said the State Department has yet to issue to Congress a mandatory report examining the autonomous status of Hong Kong in order to gauge continuing actions from Beijing before coming to a conclusion. The department might recommend that the United States no longer give Hong Kong preferential treatment as a territory that has autonomy under China.

By midday Thursday, Senators Patrick J. Toomey, Republican of Pennsylvania, and Chris Van Hollen, Democrat of Maryland, announced that they would propose legislation to impose sanctions on Chinese officials and entities that enforce the planned national security laws.

The measure would also impose sanctions on banks that do business with entities deemed to violate the Basic Law, a legal document that is supposed to guarantee Hong Kong significant autonomy until 2047.

“The communist regime in Beijing would like nothing more than to extinguish the autonomy of Hong Kong and the rights of its people,” Mr. Toomey said in a statement. “In many ways, Hong Kong is the canary in the coal mine for Asia. Beijing’s growing interference could have a chilling effect on other nations struggling for freedom in China’s shadow.”

China’s attempted crackdown on Hong Kong has been a rare cause for unity between the parties, with both liberals and conservatives rallying to the cause of democracy and condemning Mr. Xi’s increasingly authoritarian impulses.

“The USA cannot let this stand,” Senator Josh Hawley, Republican of Missouri and a staunch Trump ally and China hawk, wrote on Twitter. Mr. Hawley said he would introduce a Senate resolution “condemning this attempted crackdown” and calling on “all free nations to stand with” Hong Kong.

“This proposed legislation is a sign of Beijing’s weakness, not its strength,” said Representative Eliot L. Engel, Democrat of New York and the chairman of the House Foreign Affairs Committee. “Hong Kong’s special status is a benefit to China and the world. I don’t understand why Beijing continues to imperil that status with proposals such as this.”

Mr. Trump’s China policy has long been a battleground for dueling camps, usually featuring economic officials who favor a more conciliatory relationship and national security policymakers, led by Mr. Pompeo and senior National Security Council aides, who view China as a dangerous strategic rival that must be checked.

At the height of Mr. Trump’s trade negotiations with China in 2018 and 2019, the economy-centric view seemed to prevail and helped to explain Mr. Trump’s repeated fulsome praise of Mr. Xi as a “brilliant leader” and a “great man.”

But the emergence of the coronavirus from Wuhan, and the Chinese government’s initial efforts to conceal it, enraged Mr. Trump, who saw his re-election imperiled as a result, and in recent weeks the hawkish camp has pressed the sinister theory, with no evidence, that the virus escaped from a Chinese lab.

On Wednesday, the National Security Council released a White House strategy document detailing a “competitive” American approach devised in part to “to compel Beijing to cease or reduce actions harmful to the United States’ vital, national interests and those of our allies and partners.”

Mr. Trump did not give any indication on Thursday how he will react to the congressional effort to impose sanctions.

After Congress passed legislation last fall, Mr. Trump was noncommittal about whether he would sign the measure. But he eventually did on the evening before Thanksgiving, ensuring it gained minimal publicity.

This time his conservative allies are more adamant than ever that Mr. Trump must not look the other way. “I think this has absolutely got to be a line in the sand,” said Stephen K. Bannon, a former Trump White House strategist who now devotes much of his time to rallying conservatives to fight China’s communist leadership.

Regardless, experts said Beijing’s move would inevitably worsen a relationship that many already believe has become a kind of new Cold War.

“Beijing seems to have made the calculation that there is no financial price it won’t pay in order to eliminate the sight of millions of Chinese clamoring for democracy on a daily basis,” said Elizabeth Economy, the director for Asia studies at the Council on Foreign Relations.

“The Trump White House, unfortunately, has little leverage and even less influence with the Xi administration at this point,” she added. “Relations between the United States and China are essentially in a free fall.”