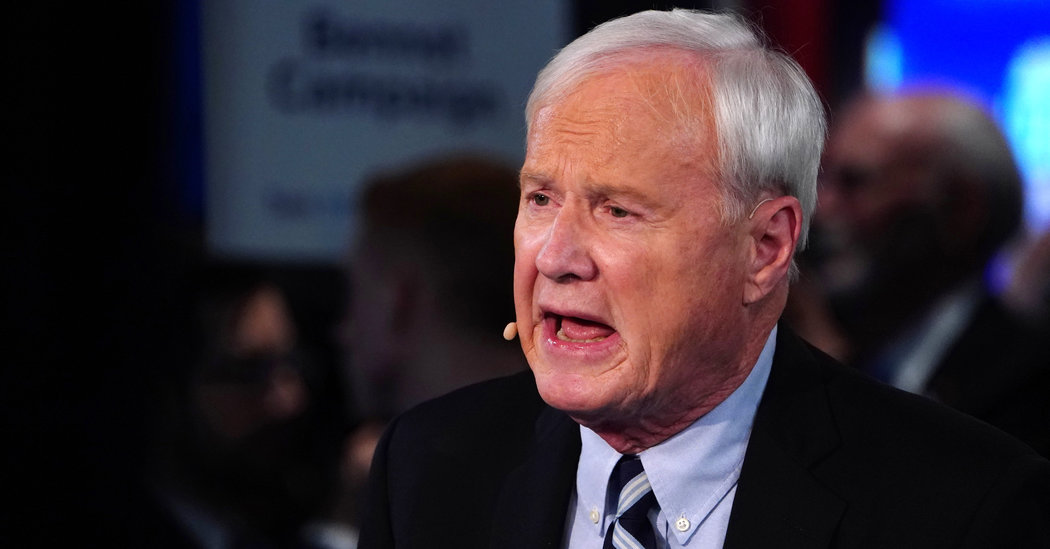 Chris Matthews, the veteran political anchor and voluble host of the long-running MSNBC talk show “Hardball,” resigned on Monday night, an abrupt departure from a television perch that made him a fixture of politics and the news media over the past quarter-century.

Mr. Matthews, 74, had faced mounting criticism in recent days over a spate of embarrassing on-air moments, including a comparison of Senator Bernie Sanders’s campaign to the Nazi invasion of France and an interview with Senator Elizabeth Warren in which the anchor was criticized for a condescending and disbelieving tone.

On Saturday, the journalist Laura Bassett published an essay accusing Mr. Matthews of making multiple inappropriate comments about her appearance, reviving longstanding allegations about the anchor’s sexist behavior. By Monday, his position at the news network he helped build had become untenable.

Accompanied by his family, Mr. Matthews walked onto the “Hardball” set inside NBC’s Washington bureau shortly before 7 p.m. to deliver a brief farewell. His longtime crew members, who had been told of his plans roughly an hour earlier, looked on stunned.

“I’m retiring,” Mr. Matthews told viewers in a solemn and brief monologue as his broadcast began at 7. “This is the last ‘Hardball’ on MSNBC.”

His sudden signoff took many colleagues by surprise — “Wait. What?” the MSNBC anchor Katy Tur wrote on Twitter — but it followed days of discussions with Phil Griffin, the president of MSNBC and one of the early executive producers of “Hardball.”

Mr. Griffin, who is close with Mr. Matthews, traveled to Washington over the weekend to discuss his future in person, according to three people who requested anonymity to describe sensitive conversations.

On the air on Monday, Mr. Matthews made clear that the timing of his exit was not entirely his choosing. “Obviously, it isn’t for a lack of interest in politics,” he said, going on to apologize for his past insensitive comments.

“Compliments on a woman’s appearance that some men, including me, might have once incorrectly thought were OK are never OK,” he said. “Not then, and certainly not today.”

MSNBC said a rotating series of hosts would fill Mr. Matthews’s time slot until a permanent replacement was named.

An eminence grise of television news, Mr. Matthews has a pugilistic and red-cheeked persona familiar to viewers from countless election nights and parodies on shows like “Saturday Night Live.” His rat-a-tat political commentary was informed by experience: Before his move into punditry, Mr. Matthews served as a speechwriter in President Jimmy Carter’s administration and spent years as chief of staff to Thomas P. O’Neill Jr., the powerful Democratic speaker of the House.

But the Matthews style was increasingly out of step with the times. In 2017, MSNBC acknowledged that the anchor had been reprimanded in 1999 after making inappropriate remarks to a female colleague, prompting a settlement. In 2008, he was quoted in a magazine profile declaring the actress Kerry Washington “a total knockout.”

MSNBC executives had discussed Mr. Matthews’s looming retirement, with an exit after Election Day likely, according to two people familiar with internal network discussions. There was talk of shifting “Hardball,” which ranked behind Fox News and CNN programming among crucial younger viewers, to a less prominent time slot.

Then came a painful 10-day stretch.

Commenting on the Nevada caucuses, Mr. Matthews compared Mr. Sanders’s victory to Germany’s takeover of France in World War II, drawing the ire of many liberals. He later apologized on-air, saying, “In the days and weeks and months ahead, I will strive to do a better job myself of elevating the political discussion.”

A day later, he was under fire again, this time for repeatedly questioning Ms. Warren about her assertion that Michael R. Bloomberg had mistreated his female employees. Ms. Warren was referring to a widely reported anecdote, and Mr. Matthews’s disbelief was criticized as sexist and dismissive.

Then GQ published Ms. Bassett’s article, which said Mr. Matthews, in a makeup room, had looked at her and asked, “Why haven’t I fallen in love with you yet?” Ms. Bassett went on to describe other comments by Mr. Matthews that had made her uncomfortable, writing, “It undermined my ability to do my job well.”

By Saturday, some of the anchor’s confidants had grown concerned about his position at the network. Mr. Matthews had been set to appear that evening as part of MSNBC’s coverage of the South Carolina primary. Instead, he was absent.

Mr. Matthews had been benched, according to a person briefed on private network conversations.

On Monday, Mr. Matthews concluded his MSNBC career by telling viewers that he would miss them and borrowing a line from “Casablanca.” “We’ll always have ‘Hardball,’” he said. “So let’s not say goodbye, but till we meet again.”

When the show returned from a commercial break, Steve Kornacki, the MSNBC anchor tasked with hosting the remainder of the episode, seemed to struggle for words.