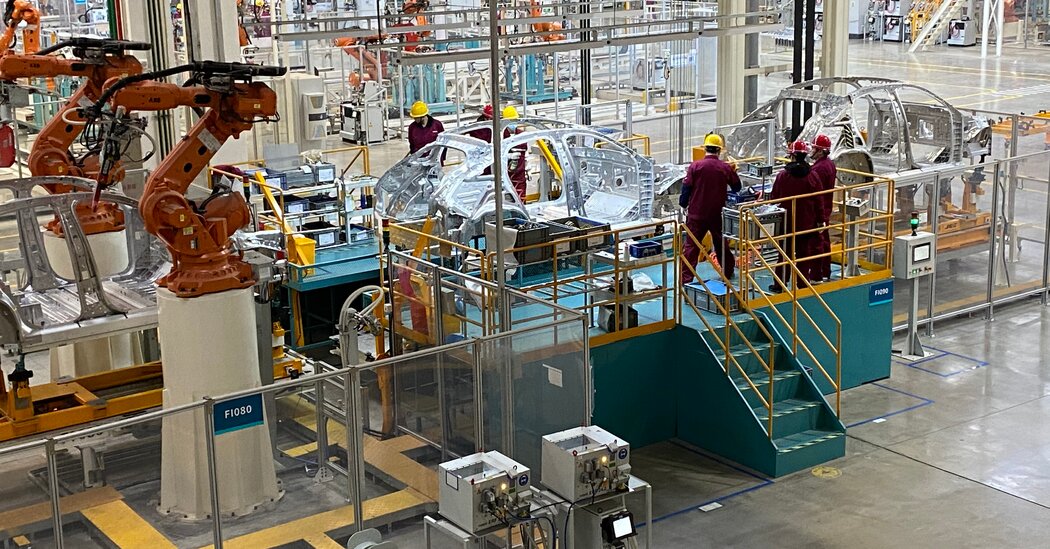 If you are in the market for an electric vehicle today, there’s a good chance you’ll buy a Tesla.

Fast forward a couple of years, and this may no longer be true. Traditional automakers like General Motors and Toyota — as well as a slew of Chinese companies like BYD, Nio, Xpeng and Li Auto — are making their own electric models available to U.S. consumers.

Indeed, as the rapidly growing market for electric cars surpasses 500 manufacturers, cross-border competition is only getting fiercer. Although Tesla’s U.S. market share of all-electric vehicles was 79 percent in 2020, it may drop to 56 percent by the end of the year. Meanwhile, several Chinese companies are expected to announce large expansion plans to build more electric vehicle factories. Tesla took 12 years to produce 100,000 vehicles. Nio and Xpeng reached that milestone in half the time.

But what could become a headache for Elon Musk, Tesla’s chief executive, is good news for both international climate goals and Sino-American diplomacy. Despite the recent fanfare over climate cooperation coming out of the Glasgow talks last month, it is competition — and not cooperation — between American and Chinese companies that will be the real driver of decreased greenhouse gas emissions around the globe.

At the COP26 conference in November, the United States and China — the two biggest polluters in the world — issued a joint statement in which they pledged to bilaterally confront the climate crisis. The countries listed a number of areas in which they intend to cooperate, including green design, the decarbonization and electrification of swaths of the economy, and the societal benefits of the clean energy transition. When Presidents Biden and Xi met virtually in November on the heels of the Glasgow conference, they confirmed their intent to work together on climate change.

Policy experts were quick to applaud these commitments to greater cooperation, especially when significant ideological differences still hamper the U.S.-China relationship, over human rights, the legal status of Hong Kong and Taiwan, and the protection of intellectual property. Overall, the U.S. and China are hard-pressed to find common ground.

So climate seems to be a rare opportunity to work together toward common goals. However, this emphasis on cooperation is missing the mark.

Critically, the two countries have agreed on certain climate goals, including trying to hold the global average temperature increase to 1.5 degrees Celsius and reducing methane emissions. The bulk of the actual transition, however — including building renewable-power plants, selling electric vehicles and insulating buildings — will be performed by private companies. And companies compete with one another.

Cooperation, then, isn’t the linchpin for driving down emissions to net zero. And indeed, cooperation without competition has its limits. The bilateral Clean Energy Research Center under the Obama administration, for instance, produced a lot of good research and great ideas. But without greater involvement by the private sector, much of this progress — including work done on carbon capture and storage — remained in the lab, too short on funding to spur private-sector demonstration projects and competition.

The best analogy to illustrate an efficient network of competing businesses operating under international agreements and ultimately getting to an outcome beneficial to everyone might be the World Trade Organization. There, member countries cooperate in the sense that they set global rules for trade. Companies then compete in a variety of sectors, from electric vehicles to telecommunications, for market share around the world.

To be sure, one of the W.T.O.’s main challenges has been friction between the United States and China regarding the interpretation of the trade rules. Nevertheless, the pledges coming out of Glasgow could serve as a blueprint for a set of standards both countries would feel pressured to follow. The private sector would then compete to sell the best green-energy options at the best price.

Opinion Conversation
The climate, and the world, are changing. What challenges will the future bring, and how should we respond to them?

There are hints of this competitive progress in the electric-vehicle market. Cross-border competition between manufacturers like Tesla and BYD provides consumers with more choice while driving down prices over time.

And the electric-vehicle market is bigger than just cars. China has led the way in popularizing electric bikes with leading start-ups like Bafang and Xiaomi. In response, a growing number of American and European companies have jumped into this space, triggering a steady stream of improvements such as lightweight, off-road and folding bike designs. The market also includes battery production and charging-station design — two subindustries where companies like G.M. and Tesla are now trying to bring production back to the United States.

U.S. participation in the global E.V. market is encouraging. Unfortunately, it’s the exception rather than the rule. Although the United States has led the world in developing renewable technologies, it has been inconsistent in providing the tax and other financial incentives needed to support their steady growth in the market. As a result, China, South Korea and many European countries have caught up in a number of renewable technologies as U.S. progress has slowed.

President Biden’s Build Back Better plan is seeking to change this. It envisions creating demand for clean energy through both regulatory requirements and procurement decisions. While aspects of the president’s climate provisions await Senate vote, some key parts of the infrastructure bill signed in November — including financial support for more electric-vehicle charging stations, power grid upgrades and rail improvements — are now law. This puts American businesses committed to green technology in a better position to be able to compete with their Chinese rivals. Consistent, long-term support for projects based in the United States is the key to building up U.S. industrial capacity in other renewable-energy markets such as wind and solar.

Competition does not mean teetering at the edge of conflict. The key in this process will be for the United States to respect its rivals, including China. It’s also important to give credit where credit is due. China has greatly reduced both its coal use and air pollution in the past decade. Its reforestation efforts are even more impressive: Forest cover in China has grown to over 23 percent today from just 8.6 percent in 1949.

Of course, there is so much more to do. But things are looking up, and responsible competition is our best hope for global climate progress.

Deborah Seligsohn is an assistant professor in the political science department at Villanova University, a senior associate in Chinese business and economics at the Center for Strategic and International Studies and a Woodrow Wilson Center China Fellow.