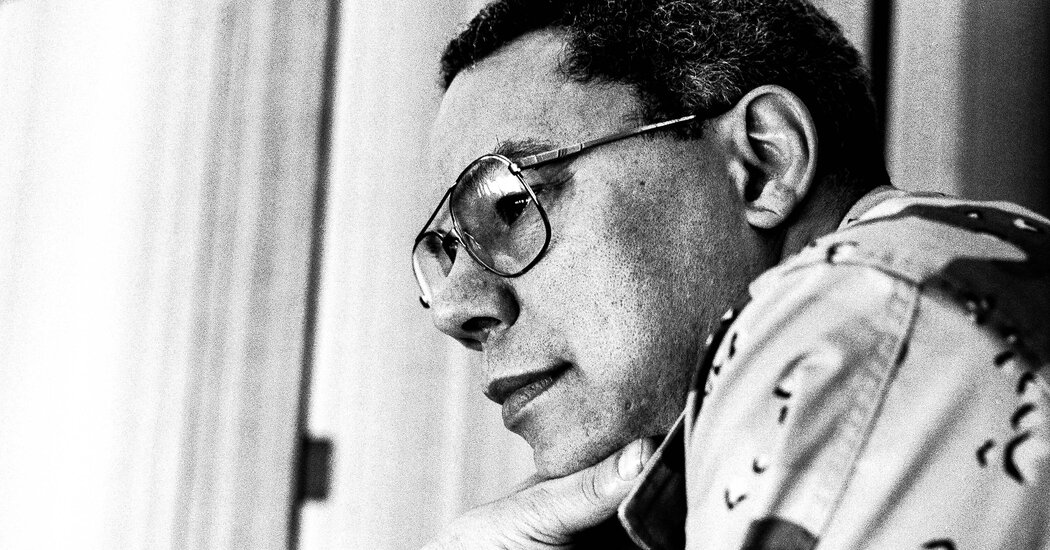 Ten years ago, in a townhouse near the White House, I was a somewhat star-struck young naval officer listening to Colin Powell talk about, of all things, squirrels. He was visiting with my class of White House fellows — Mr. Powell himself was the program’s most notable alum. He recounted an Oval Office meeting with President Ronald Reagan in 1988 where he sought the president’s advice on an interagency issue. Suddenly, an obviously uninterested Mr. Reagan interrupted him to point out that the squirrels in the Rose Garden were eating nuts the president had set out earlier in the morning.

Mr. Powell, still visibly amused by the anecdote (it would ultimately appear in his book on leadership), said something about it being a lesson about delegation and staff empowerment, Mr. Reagan’s indifference to Mr. Powell’s griping essentially communicating, “That’s a problem for you to solve, not me.” What I recall most is how clear it was that the president was no sage in the story — rather, the only reason it was worth telling is because of the meaning Mr. Powell found in it.

Mr. Powell passed away this week after a life of firsts — the first Black national security adviser, the first Black chairman of the Joint Chiefs of Staff and the first Black secretary of state. But the mark he leaves for posterity is far more than a collection of superlative achievements. It’s in the disaggregation of these things — considering his race and his profession in distinct ways — where we can learn more about America, both what it is and what it’s becoming.

The trajectory of Mr. Powell’s public life — broadly characterized by the seeming paradoxes of being Black and Republican, soldier and diplomat — holds a particular message for a nation whose democracy is increasingly in peril. His achievements were historic, but there is a warning about how institutions can co-opt exemplary citizens for their own interests, the damaging effects of prizing partisan loyalty over principle, and the dangers associated with racializing issues for political expedience.

Mr. Powell’s Army service spanned a transformation of the military, from the Vietnam-era drafted force to an all-volunteer force that outlasted the Soviet Union and quickly dominated the Iraqi military in the Gulf War. He was the face of this new era of American power and trust in the armed forces, his nationally televised briefings expanding the influence and visibility of the chairmanship.

During the 1990s, Mr. Powell’s achievements were a point of pride for many Black Americans. For a generation of many Black military service members, he was to us who Thurgood Marshall was to the next cohort of civil rights lawyers and who Shirley Chisholm and Barbara Jordan were to Black aspirants for congressional office.

I still remember poring through a paperback copy of his memoir, “My American Journey” (written with Joseph Persico). It was a gift from my mother upon my commissioning in the Navy. Littered with dog-eared pages and highlighted passages and notes scribbled in the margins, the book became a professional road map for me and many other Black military men and women looking to navigate the service’s culture and hierarchy, especially when you’re the only Black person in the room.

In 1995, he considered running for the Republican presidential nomination. But the party was changing — Newt Gingrich’s scorched-earth partisanship and Pat Buchanan’s far-right populism had taken root in the base. He decided not to run. When he addressed the 1996 Republican convention, he was greeted with scattered boos for daring to think differently from the party’s faithful on abortion rights and affirmative action.

His Republican affiliation was anomalous in Black America, but his politics were not: The deification of education, hard work and desire for self-determination informed his worldview just as it long has for much of Black America.

His sterling reputation eventually led him into positions where he would become an avatar for the present set of challenges to the well-being of our democracy.

Most memorable was his 2003 speech at the United Nations Security Council to make the case that Iraq possessed weapons of mass destruction. Mr. Powell was put forward as a pre-emptive rejoinder to the strongest critiques of the nation and its rationale for going to war.

How could critics say that the decision was impulsive when the progenitor of the Powell Doctrine, which advocated large and overwhelming force, was in favor? How could they accuse the United States of acting out of racial animus or question its commitment to freedom with Mr. Powell, the son of Jamaican immigrants and personification of the American dream, at the helm?

It was an open secret that he didn’t agree with Vice President Dick Cheney and Secretary of Defense Donald Rumsfeld on Iraq. Mr. Powell wanted to focus on Al Qaeda in Afghanistan and act as part of an international coalition; he cautioned that removing Saddam Hussein would be far easier than maintaining order after his deposal. But Mr. Powell put his reputation on the line for the administration and what was perceived to be in the national interest.

At the time, I was a junior officer at an intelligence agency. Mr. Powell demonstrated how to move in rooms of power and how to manage the pressure that came with it. I remember not knowing whether to feel pride that he’d been entrusted with making the case to the nation or angry that he was positioned to be the fall guy if something went wrong. Mr. Powell came of age during the Vietnam War, when the perception was that Black soldiers were cannon fodder, and now he was set up to take political and reputational fire for the administration.

And so it was. Once it came to light that no such weapons existed, the credibility that Mr. Powell had established over four decades of service was severely damaged. Mr. Powell left the administration; his loyalty met no reward. The “national interest” treated him as an instrument for its purposes.

Liberated from the constraints of the military uniform and presidential appointments, Mr. Powell’s Republicanism would soon return to the spotlight. His conservatism resembled the brand of politics practiced by Black public figures seeking state and national elected offices, characterized by pragmatism, optimistic appeals to American ideals and intentionally avoiding making race central to their campaigns and policy positions. It was his party, not his politics, that was out of step with a majority of Black voters. It’s not surprising that there is a through line that connects the former Republican Massachusetts Senator Ed Brooke, the former Democratic governor of Virginia Douglas Wilder, Mr. Powell and Barack Obama.

In 2008, when Mr. Obama ran against Senator John McCain, a revered military man in his own right, many Americans wondered which of Mr. Powell’s identities would shape his choice for president: his race or his party and profession. His decision to support Mr. Obama, inaccurately caricatured as choosing race over ideology, was not received well by Republicans, and he was unceremoniously ostracized from the party.

The seminal moments of Mr. Powell’s career are prescient. Echoes of his justification for the role he played in the lead-up to Iraq could be heard in the responses of retired military generals in the Trump administration for why they served and carried out the will of a president they didn’t think was up to the job. The importance of allegiance to party instead of a set of ideological positions has grown since Mr. Powell was booed in 1996. The stoking of racial resentments that has come to typify every policy debate — from immigration to grade school curriculums — was what facilitated Mr. Powell’s exit from the Republican Party.

Perhaps drawing such conclusions from Mr. Powell’s life is like Mr. Reagan’s notice of the squirrels — finding a deeper meaning in events than actually exists. But for our democracy at the precipice, we should take inspiration from Mr. Powell’s accomplishments and commitment to the nation’s ideals, understand that life often forces us to choose between doing the right thing and the expedient thing for the right reasons, and be ever reminded of the role race plays in our society, even for its citizen exemplars. In doing this, we can ensure his memory holds meaning for generations of Americans to come.

Theodore R. Johnson (@DrTedJ), a retired Navy commander and a senior fellow at the Brennan Center for Justice, is the author of “When the Stars Begin to Fall: Overcoming Racism and Renewing the Promise of America.”