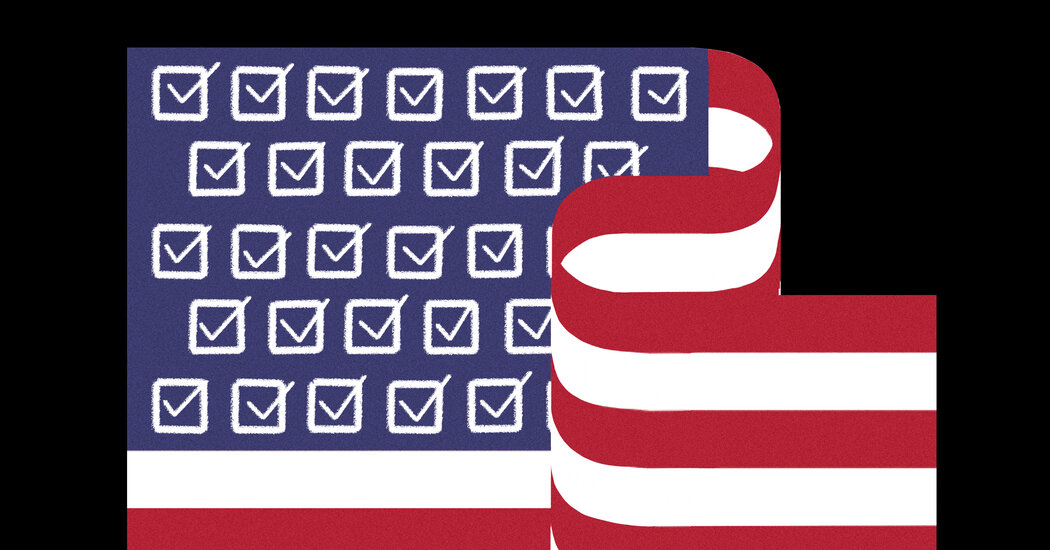 Republican-controlled state legislatures are whittling away at the integrity of electoral democracy in the United States, rushing to pass laws that make it harder for Americans to vote and easier for partisans to tamper with election results.

It is a legislative assault motivated by the failure of President Donald Trump’s re-election campaign and justified by baseless allegations about the legitimacy of his defeat. Mr. Trump and his supporters pursued indiscriminate lawsuits to overturn the results and then, urged on by Mr. Trump, some of his supporters stormed the Capitol to halt the completion of the election process. Now they are seeking to rewrite the rules to make it easier for Republicans to win elections without winning the most votes.

This effort is inimical to the most basic principles of free and fair elections: that all who are eligible should have an equal opportunity to vote, that all votes should be counted and that the losing side should accept defeat and acknowledge the legitimacy of the outcome.

In the face of these threats, Democrats in Congress have crafted an election bill, H.R. 1, that is poorly matched to the moment. The legislation attempts to accomplish more than is currently feasible, while failing to address some of the clearest threats to democracy, especially the prospect that state officials will seek to overturn the will of voters.

Because there is little chance the bill will pass in its current form, Democrats face a clear choice. They can wage what might be a symbolic (and likely doomed) fight for all the changes they would like. Or they can confront the acute crisis at hand by crafting a more focused bill, perhaps more palatable for more senators, that aims squarely at ensuring that Americans can cast votes and that those votes are counted.

A new election law in Georgia highlights the shortcomings of H.R. 1. The Georgia law, passed in March, imposes a host of restrictions on voter registration and on voting, most of which would be reversed by the federal legislation. It also changes the rules of vote counting in ways that are not addressed by the federal legislation. It facilitates third-party challenges to the legitimacy of votes and arrogates to the state legislature, the General Assembly, the power to appoint most members of the state board of elections, who in turn have the power to replace county boards of elections. The legislature removed Georgia’s secretary of state from the State Election Board after the incumbent, Brad Raffensperger, refused to help Mr. Trump stake an illegitimate claim on the state’s electoral votes.

At least 13 states have joined Georgia in passing new restrictions. Among them are a Montana law that ends the practice of allowing voters to register on Election Day and an Iowa law that requires the state’s polling places to close one hour earlier. Other bills are pending, including in Texas, where Republicans may use a special legislative session to pass a package of voting restrictions that rivals the severity of the new rules in Georgia, and in Arizona, where Senate Republicans have been conducting a tragicomical “audit” of the 2020 election.

In a statement published this week by the left-leaning think tank New America, more than 100 leading scholars of government warned that election laws in some states “no longer meet the minimum conditions for free and fair elections.” The statement warned that “our entire democracy is now at risk.”

The new restrictions have a disproportionate impact on Black and other minority voters. There is little comfort in the fact that these rules are much less restrictive than those in the olden days. The Jim Crow regime was constructed gradually.

The vote-counting process necessarily relies on the judgment and integrity of local officials. No rules can perfectly prevent malfeasance. But Congress can take steps to protect the integrity of the election process.

One important measure included in H.R. 1 is to require a paper record of every vote, so that outcomes can be verified independently.

But the bill needs to go further. Congress also should establish uniform rules for vote counting, certification and challenges. It should also clarify its own role in certifying the results of presidential elections to prevent the possibility that a future Congress would overturn a state’s popular vote.

Some of the areas that are addressed by H.R. 1, including protections for voting and provisions to limit gerrymandering, are also urgent, because the threats to electoral democracy are interlocking. Restricting participation in elections, and playing with district boundaries, both conduce to the election of more extreme politicians, who in turn are more likely to regard elections as purely partisan competitions waged without regard to the public interest.

In addition to setting minimum standards for voting access, there is also a need to constrain states from moving backward, even if existing standards exceed those minimums.

Democrats are separately pursuing the revival of a key provision of the Voting Rights Act of 1965, which required certain states and counties, mostly in the South, to obtain approval for any changes from the Justice Department. A 2013 Supreme Court ruling effectively ended this system, helping to clear the way for the restrictions that states are now imposing.

Senator Joe Manchin of West Virginia, whose support Democrats must win to advance a bill, has proposed to apply that standard to every state.

After the 2004 election, for example, Ohio created an extended period of early voting. The beginning of the window overlapped with the end of the voter registration period. During the period known as the “Golden Week,” Ohioans could register and vote on the same day. In 2014, Ohio shortened early voting and ended Golden Week, citing the standard phantasm of voter fraud. Under a national review requirement, Ohio would have been forced to defend the decision even though it still offered more early voting than many other states.

H.R. 1 is a sprawling bill that contains much more beyond this. Among other things, it would reshape campaign finance and impose new ethics restrictions on some government officials. This board has endorsed an earlier version of H.R. 1, many of the current bill’s goals, as well as ending the filibuster to pass the bill outright. If proponents can muster the necessary votes to pass an expanded version that addresses threats to vote counting, that would be the best outcome for the United States. If they cannot, however, then it makes sense to pursue a narrow bill aimed squarely at voting access rollbacks and subversion of election results.

Senators with hesitations about H.R. 1 need to put forward their own ideas for protecting the rights of voters. The power of the states to administer elections is unquestioned, but it is not unlimited. In a representative democracy, the legitimate power of the representatives cannot extend to acts designed to undermine democracy.

If Democrats can find 50 votes for reform, they should not postpone necessary interventions in the illusory hope of a bipartisan breakthrough, nor allow Republicans to filibuster.

American history is sometimes narrated as a gradual expansion of participatory democracy, as workers and women and Black people gained the right to vote. The reality is less flattering. Participation has expanded, and it has contracted. Democracy has strengthened and waned. The gains in the second half of the 20th century are now eroding. There is a narrow window of opportunity to intervene.