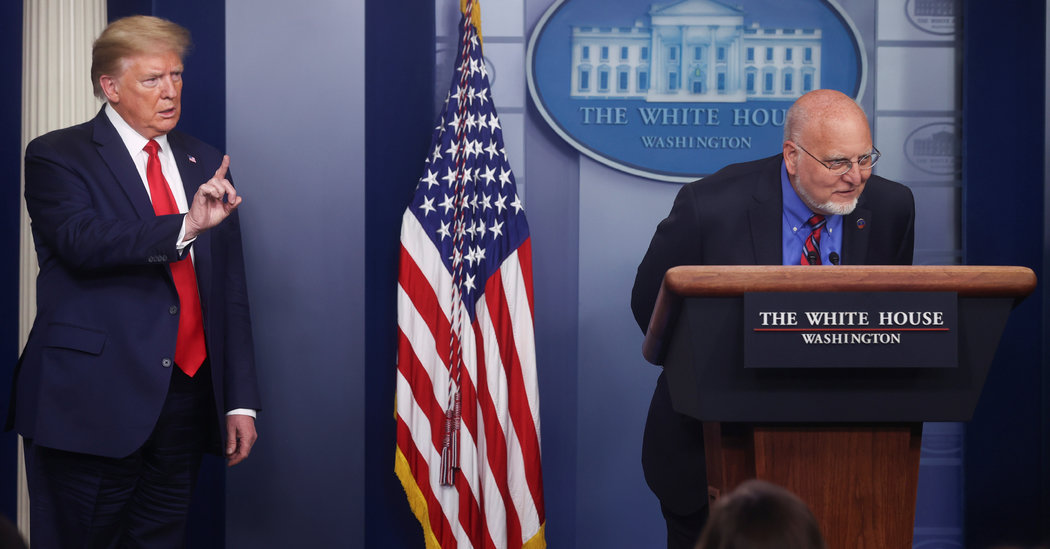 In an interview with The Washington Post on Tuesday, Dr. Robert Redfield, director of the Centers for Disease Control and Prevention, warned that a second wave of coronavirus infections this coming winter “will actually be even more difficult than the one we just went through,” because it will coincide with flu season. He also called the protests against stay-at-home orders “not helpful.”

Donald Trump was apparently not pleased, tweeting that Redfield was “totally misquoted by Fake News @CNN.” On Wednesday evening, after another rant about fake news, Trump brought Redfield onstage at his daily press briefing, where Redfield had the unenviable task of trying to explain his remarks, which he acknowledged were quoted accurately, without contradicting the president. The fall and winter might be “more difficult and potentially more complicated” due to the confluence of coronavirus and influenza, Redfield said, but that didn’t mean the second wave would be “worse.”

Trump, meanwhile, spoke of the crisis in the past tense, as something America is now emerging from, suggesting that all the country will face in the future is “some embers of corona.” The day before, the country had recorded around 2,200 deaths, making it one of the deadliest days of the pandemic in the United States.

Over the last three and a half years, Americans have had to accustom themselves to a relentless, numbing barrage of lies from the federal government. In one sector after another, we’ve seen experts systemically purged and replaced with toadying apparatchiks. The few professionals who’ve kept their jobs have often had to engage in degrading acts of public obeisance more common to autocracies. Public policy has zigzagged according to presidential whim. Empirical reality has been subsumed to Trump’s cult of personality.

But as long as the economy was decent and many of the crises Trump created were far away, the immediate costs of Trump’s narcissistic governance have been, for most citizens, more psychic than material. That changed with the coronavirus. Today the lies are no longer about the size of the audience at Trump’s inauguration, the fruits of sucking up to North Korea or the findings of Robert Mueller’s special counsel investigation. Now the bill for a president with a tyrant’s contempt for truth and competence has come due.

This week brought a barrage of new evidence of how Trump’s assault on nonpartisan expertise has undermined America’s fight against coronavirus. On Wednesday, The Times broke a story about Dr. Rick Bright, the official who led the federal agency working toward a coronavirus vaccine. Bright claims he was reassigned because he “resisted efforts to fund potentially dangerous drugs promoted by those with political connections.”

Specifically, Bright says he was cautious about the use of the anti-malaria drug hydroxychloroquine, touted as a coronavirus “game changer” by some Fox News personalities. One recent study showed no benefit from the drug in Covid-19 patients, and on Friday the F.D.A. warned of “reports of serious heart rhythm problems in patients with Covid-19 treated with hydroxychloroquine or chloroquine.”

Also on Wednesday, The Wall Street Journal reported that Trump wanted to fire Dr. Nancy Messonnier, a C.D.C. expert on respiratory diseases, when she warned, on Feb. 25, that community spread of the coronavirus was likely in the U.S. and that everyday life could be severely disrupted. Reuters reported that Alex Azar, the health and human services secretary, assigned his department’s day-to-day responsibility for coronavirus to an aide with little public health experience whose previous job was running a Labradoodle-breeding business.

Further, the federal government still has no discernible plan for instituting the sort of mass testing and tracing regime that, according to most experts, we’ll need to return to some semblance of normal life. Hospitals have been reduced to cloak-and-dagger schemes to source coveted protective equipment from private brokers. “The cavalry does not appear to be coming,” a Massachusetts doctor told The Associated Press.

Instead, Trump has repeatedly denied the need for more testing and set arbitrary dates for lifting lockdown orders. He’s tweeted support for demonstrators, some armed, defying social distancing guidelines. According to The A.P., Trump initially told Gov. Brian Kemp of Georgia that he approved of the state’s plan to allow businesses like gyms, tattoo parlors and movie theaters to start operating, before publicly changing his mind when aides convinced him the scheme was too risky. Even now, thanks to industry lobbyists, gyms are on the administration’s list of businesses that should be among the first to reopen, despite surely being easy places for disease to spread.

America was once the technological envy of the world. Now doctors have to warn the public that, contrary to the president’s musings in the briefing room, it is neither safe nor effective to inject disinfectant.

“If you look at why America rose so much after 1945, it was because America attracted the best scientists in the world,” Klaus Scharioth, Germany’s ambassador to America from 2006 to 2011, told me. “America attracted expertise. You had the feeling that all governments, be they Republicans or Democrats, they cherished expertise.” Like many Americanophiles abroad, Scharioth has watched our country’s devolution with great sadness: “I would not have imagined that in my lifetime I would see that.”

Recently Adam Higginbotham, author of the acclaimed book “Midnight in Chernobyl” (and the husband of my book editor), told me he felt a shiver of recognition when he read about Trump, in January, reportedly calling Azar’s concern about the coronavirus “alarmist.” A senior Soviet apparatchik used the same word to brush off a call for evacuation after the Chernobyl nuclear disaster in 1986.

As the coronavirus crisis has unfolded in America, Higginbotham has noticed other parallels. “The response that I see has followed a very similar trajectory: initial public denials or reluctance to publicly admit that anything was wrong, then attempts to minimize the severity of what was happening, rooted in an institutional inability to acknowledge failure,” he said. “The initial response was hampered by a lack of equipment and a breakdown in communication that revealed that despite years of planning, the state was hopelessly ill prepared for such a catastrophe.”

Yet one crucial difference also stands out to him. Soviet officials lied about Chernobyl and tried to shift blame but accepted that remediation was the state’s responsibility. “There was a lot of disinformation and cover-up, but as far as I know nobody in the Politburo was on the phone to the party leaders in Kyiv and Minsk saying, ‘You’re on your own — sort it out yourselves,’ ” said Higginbotham.

Chernobyl is now widely seen as a signal event on the road to the dissolution of the Soviet Union. Coronavirus may someday be seen as a similar inflection point in the story of American decline. A country that could be brought to its knees this quickly was sick well before the virus arrived.