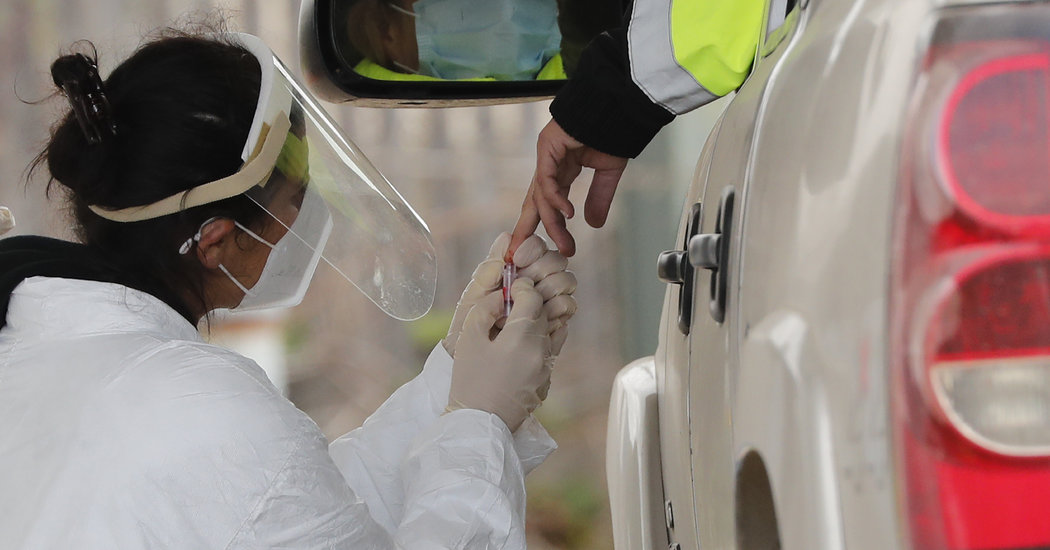 As states across the country weigh options for reopening after weeks of stay-at-home orders, antibody tests have emerged as a potential pathway on how — and when — to do it.

But there are many caveats, as a recent study found that many of the antibody tests available currently provided inaccurate results.

Antibody tests look for signs in the blood that a person has been exposed to the novel coronavirus. Knowing who has been exposed, along with how many people have been, may help to better understand the spread of the virus. This is especially important as studies continue to show that significant percentages of all coronavirus carriers — in some studies, up to half — show no symptoms at all.

The Food and Drug Administration in the United States said this month that “the question of when we can return to work and resume our normal activities is one of the most critical issues facing our nation. Antibody tests — also known as serological tests — may have the potential to play a role in this complex calculation.”

What is an antibody test, and how does it work?

When your body is exposed to a foreign pathogen, like a virus that causes illness, your body’s response is to produce antibodies that live in the blood and tissue. These are proteins that bind to and destroy the virus, preventing it from making copies of itself and further spreading the infection.

The antibody test, also called a serology test, looks at whether your body has developed those antibodies; the presence of them most likely means you were exposed to Covid-19, the illness caused by the virus. Some tests, like the one used by the Mount Sinai Health System in New York, can measure the level of antibodies in your system — your titer.

But in general, most of the tests being made available across the country detect only whether the antibodies are present, said Dr. Jeffrey Jhang, medical director of clinical laboratories and transfusion services for the Mount Sinai Health System. A direct-to-consumer test announced on Tuesday from Quest Diagnostics — more on that below — measures only presence or absence.

Antibodies can take generally anywhere from about a week to 14 days to develop, Dr. Jhang said, and the levels of antibodies vary based on time since exposure and a person’s immune system. This means that a lack of antibodies does not necessarily mean you were not exposed to the virus.

The test is similar to other blood tests you may have had before: A sample of blood is taken from the patient and is then analyzed to determine the presence of antibodies. Most tests will generally return results within a few days, but that may vary, as some tests can return results in a few hours.

If I have antibodies, I’m immune, right?

The antibody test does not test for immunity to Covid-19. There is no test yet that can tell if you are immune. It is simply too early to know if the presence of antibodies confers immunity, as this is a new virus, meaning we’ve never seen it before.

But experts generally agree that, based on experiences with other viruses, including SARS, the presence of antibodies most likely does confer some level of protection, though we don’t know to what extent or for how long.

“But we really have to wait to see some evidence of that before we can be confident in being able to say that these antibodies can be protective,” he said.

If I get an antibody test, can it tell if I have the virus?

An antibody test is not the same thing as a diagnostic test for Covid-19, and it will not diagnose whether you currently have it.

Do I still need to practice social distancing if I have antibodies?

Yes. If you test positive for antibodies, it is important that you continue to practice social distancing and proper general hygiene, as we still don’t know if antibodies confer immunity. Wear a mask, wash your hands regularly, socially distance yourself and clean your home often.

Why does this matter?

As we just learned, knowing your antibody level will help you determine whether you’ve been exposed to the coronavirus. This does not mean you’re immune, and you should still practice all of the safety precautions you have been. But it does mean you may be eligible to donate convalescent plasma, which can potentially help patients still suffering from Covid-19 by allowing them to “borrow” your antibodies to accelerate their recovery time.

Widespread antibody testing may also give us a clearer picture of the scope of the disease. Results from a random testing of 3,000 people in New York City recently suggested that as many as one in five residents — or about 2.7 million people — might have encountered the disease without realizing it. When describing the results, Gov. Andrew M. Cuomo said that because the rate of infection might be far higher than initially thought, the death rate of the virus might be far lower than we thought.

Once the medical community determines whether antibodies confer immunity — which experts say will take at least six months or so to determine — we’ll have a better sense of who may be less at risk emerging from lockdown.

“Once we understand that the antibodies are protective, then the testing means something,” Dr. Jhang said, as it may help “figure out who can go back to work and be protected and not spread the disease, or when kids can go back to school, teachers going in to teach.”

Are the tests accurate?

A study of 14 available antibody tests published last week found that only three delivered consistently reliable results. The study, which has yet to be peer-reviewed, found that only one test never returned a false positive, which is when the test incorrectly confirms the presence of coronavirus antibodies in people who didn’t have them. The other two tests with consistently reliable results returned false positives about 1 percent of the time.

Further, these three tests confirmed the presence of antibodies in infected people only 90 percent of the time.

Part of the reason for the inaccuracies, Dr. Jhang said, may be what’s called cross-reactivity: This is when a test misidentifies antibodies for a different, but similar, coronavirus.

Florian Krammer of the Icahn School of Medicine at Mount Sinai in New York told The New York Times that false positives weren’t necessarily an issue when determining how widespread the disease is, as a given test’s false-positive rate can be accounted for in estimates. They do, however, matter greatly on an individual level.

“You don’t want anybody back to work who has a false positive — that’s the last thing you want to do,” Dr. Krammer said.

And the World Health Organization, citing ideas for an “immunity passport” or “risk-free certificate” from some countries, last week advised against relying on the tests for policy decisions.

Should I get a test?

If you think you currently have Covid-19, or have experienced in the last few days symptoms like coughing, fever, loss of taste or smell, or difficulty breathing, you should not get a test. Again, the antibody test is not the same as a diagnostic test for Covid-19.

The test is generally intended for people who either have had a positive test for Covid-19 and have recovered; or who think they were exposed to Covid-19 and no longer have symptoms.

Quest Diagnostics, which on Tuesday announced it is selling a direct-to-consumer antibody test — meaning you don’t need to first see a physician to take it — offered these guidelines for people interested in an antibody test:

Where can I get a test?

While getting a test to diagnose Covid-19 is still somewhat difficult, antibody testing seems to be rolling out a little more smoothly. Many organizations nationwide are beginning to offer the test, perhaps most notably Quest, which is offering the test without a physician’s referral at the 2,200 patient service centers it operates around the country, the company said.

LabCorp, a competitor of Quest, announced on Monday that, with a physician’s referral, patients could get an antibody test at any of its more than 2,000 patient service centers, as well as its 100 locations in Walgreens.

In New York City, the walk-in clinic CityMD said in an email to patients that, as of Tuesday, it would also offer antibody testing that would “indicate with high accuracy if you had the virus in the past whether or not you experienced symptoms.”

CityMD advises that people “wait two to four weeks after the end of symptoms to get the antibody test.” For more information about getting tested through CityMD, click here.

Last, you can just ask your doctor about antibody testing, as doctors can refer patients to many locations running the test nationwide. Most insurance providers should cover the test, but check with yours to be sure.