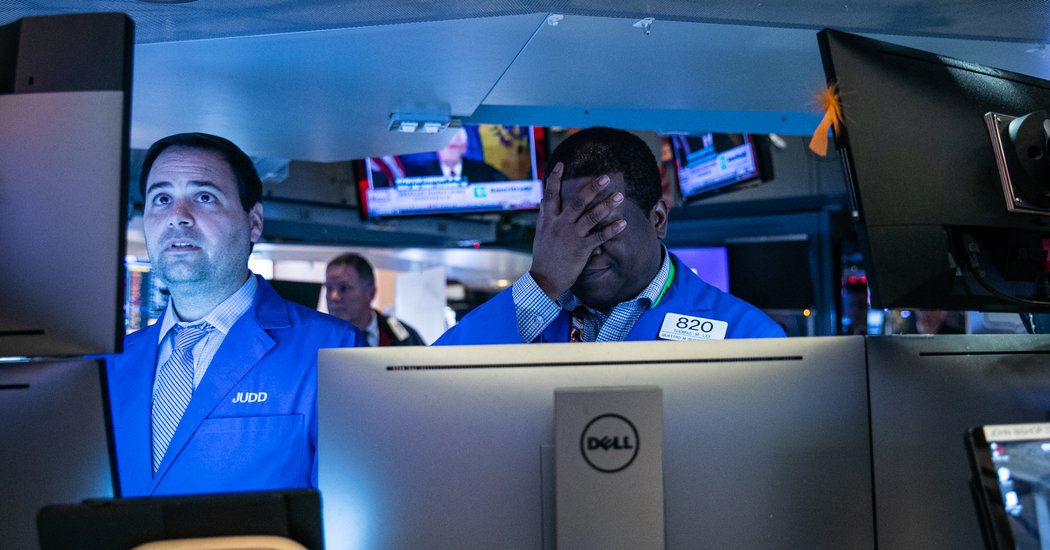 The global stock market slid for the sixth straight day on Thursday, as the S&P 500 index plunged to its worst loss in almost nine years and investors worldwide grew increasingly fearful that the coronavirus outbreak could cause a recession as it squeezes corporate profits.

The S&P 500, which just last Wednesday reached a record high, slid 4.4 percent, its worst day since August 2011. The index is down 12 percent since that peak, entering what is known as a correction — a drop of at least 10 percent that signals a more significant sell-off than a few days of pessimistic trading.

The widening scope of the health crisis threatens to overwhelm global supply chains, especially in China, the world’s second-largest economy after the United States. In addition, the outbreak could crush consumer demand, as people limit travel or stay home even without a government order to do so.

Scott Clemons, the chief investment strategist for private banking at Brown Brothers Harriman, said the outbreak’s potential to alter American consumers’ habits was at the heart of the sell-off.

“To the degree that consumers change their behavior — so they stop going out to eat, they don’t take the vacation, they cancel the business trip — that consumption, that spending, personal consumption is 68 percent of G.D.P.,” Mr. Clemons said.

Over the past few days, companies as varied as United Airlines, Mastercard and Pfizer have said the outbreak poses a threat to their 2020 earnings.

And analysts at Goldman Sachs predicted on Thursday that companies in the S&P 500 would generate no profit growth this year as a result of the crisis, because of a “severe decline in Chinese economic activity,” disruption in the supply chain for American companies and a slowdown in the U.S. economy.

On Wednesday, President Trump addressed the outbreak, expressing confidence that the risk to the United States was low. But investors were clearly not convinced.

“When you get into a situation like this, it cascades, and that really becomes a problem,” said Steve Sosnick, chief strategist at Interactive Brokers in Greenwich, Conn.

As stocks were falling Thursday, other countries struggled to contain the outbreak.

Prime Minister Shinzo Abe of Japan asked all of the country’s schools to close for a month. Health officials in Germany reacted aggressively after a man with no known connection to anyone infected with the coronavirus had tested positive, closing schools and urging some who may have come in contact with him to stay home for two weeks.

In Italy, the number of coronavirus cases rose to 14, and in France they more than doubled to 38. “We have before us a crisis, an epidemic that is coming,” said President Emmanuel Macron of France.

In Europe, Denmark, Estonia, Norway and Romania all reported infections for the first time, joining Austria, Croatia, Germany, Greece, North Macedonia, Spain, Sweden and Britain. And concerns grew about the severity of the outbreak in Iran, the source of infections in many other countries. The government there said Thursday that 245 people had been infected — including a member of President Hassan Rouhani’s cabinet and six other officials — and 26 had died.

The outbreak hit foreign markets hard, too, as the slump continued into Friday. Markets in Tokyo were down about 3 percent early in the day, while shares in Shanghai and Hong Kong opened about 2 percent lower. Futures markets suggested worries might ease later Friday, but sentiment has tended to worsen later in the trading day, particularly as the virus’s spread has accelerated in Europe.

The S&P 500 is on track for the market’s worst week since the 2008 financial crisis, and other economic indicators are flashing warning signs.

Oil prices have tumbled as people cut back on travel and investors worry about a slump in industrial and consumer demand. Meanwhile, money has poured into investments like gold and government bonds, which are generally considered safer.

Bond markets — which are far larger than stock markets and especially sensitive to the outlook for growth and inflation — were broadcasting pessimism about the economy even before the outbreak. That pessimism only increased this week, as prices for corporate debt from even the safest of borrowers fell and investors rushed to government debt.

Demand for U.S. Treasurys pushed up prices and drove down yields: The yield on the 10-year Treasury note, a closely watched barometer of investor outlook, fell to a record low of 1.29 percent.

But the performance of stocks was especially stunning. Randy Watts, chief investment strategist at William O’Neil, an equity research and advisory firm, said the sell-off could get worse, because investors may be wary of holding on to stocks over a weekend that could bring more scary news.

“I think this is bad, especially going into a Friday,” he said.

Shares of Microsoft, the most valuable company in the United States, fell 7 percent after the software giant said on Wednesday evening that its sales in the current quarter would be lower because of the outbreak’s effect on its supply chain. Anheuser-Busch InBev, the maker of Budweiser, forecast a steep drop in quarterly profits. Its shares fell 9 percent.

In the United States, consumers have been a bright spot over the past year, even as the trade war prompted a broad-based slump in business investment and manufacturing. Part of the reason is that the Federal Reserve has kept interest rates low, which prods consumers to spend more.

But that won’t necessarily work if factories are closed and consumers aren’t willing to risk stepping outside.

“Lower interest rates are not a cure for the coronavirus,” said Mr. Clemons, the private banking strategist.

Already, the consensus estimate for first-quarter domestic growth has slipped to 1.5 percent, according to data from FactSet on Thursday, from 1.7 percent at the end of 2019.

“That moves it beyond the sphere of ‘people feel bad because their 401(k)s are down,’” Mr. Clemons said, “and into the sphere of economic reality.”