China’s leader, Xi Jinping, visits Wuhan for the first time since the outbreak erupted there.

The Chinese leader, Xi Jinping, arrived on Tuesday in Wuhan, visiting the center of the global coronavirus epidemic for the first time since the outbreak began and sending a powerful signal that the government believes the worst of the national emergency is over.

His trip is sure to be seen as a sign that China’s leaders believe that a series of draconian restrictions, including the lockdown of hundreds of millions of people starting in late January, have brought the outbreak under control.

According to official data, coronavirus infections have recently receded in China, falling to a few dozen new cases every day, nearly all of them in Wuhan, the provincial capital. More than three-quarters of the 3,136 deaths recorded in China were in the city of 11 million people.

On Tuesday, China said it recorded 19 new infections from the coronavirus, and 17 deaths, in the past 24 hours. All but two of the newly confirmed infections were in Wuhan, the central Chinese city where the virus originated. The remaining two infections involved people who contracted the virus after traveling abroad.

Few details of Mr. Xi’s itinerary were available. China’s main state broadcaster, CCTV, reported that he visited the Huoshenshan Hospital, which the government built in under two weeks to treat coronavirus patients with serious symptoms.

In Wuhan, most residents remain under heavy restrictions. But growing numbers of neighborhoods across the city have been declared free of new infections, and officials have said that the last two makeshift isolation centers for patients with mild cases of coronavirus infection would close.

Italy says it’s halting most travel and public gatherings to try to restrain the outbreak.

The Italian government on Monday night extended restrictions on personal movement and public events to the entire country in a desperate effort to stem the coronavirus outbreak — an extraordinary set of measures in a modern democracy that values individual freedoms.

Prime Minister Giuseppe Conte announced in a prime-time news conference that public gatherings were banned and that people would be allowed to travel only for work or for emergencies.

Those restrictions had been placed on the “red zone” created in northern Italy, covering about 16 million people, but Mr. Conte extended them to an entire nation of 60 million.

“We all have to renounce something for the good of Italy,” said Mr. Conte, saying that the government would enact more stringent rules over the entire Italian peninsula.

Italy has recorded more than 9,000 coronavirus infections and 463 deaths — well over half the toll for Europe — and the numbers continue to climb fast.

By Tuesday, Austria urged its citizens to return home ahead of the lockdown in the neighboring country.

“Austrian travelers are urgently advised to return to Austria,” the foreign ministry said on its website.

As of Tuesday, at least 4,020 people worldwide have died after becoming infected by the new coronavirus. Just 884 of those deaths occurred outside mainland China.

Also by Tuesday, more than 100 countries detected the virus, including Mongolia and Brunei, the most recent nations to report their first cases.

Coronavirus cases are spreading across the United States — the number of new infections grew on Monday for the seventh consecutive day — but the focus has largely remained on the West Coast.

A nursing care center in the Seattle suburbs where many residents have died announced 31 new cases. Thousands of passengers aboard a cruise ship that docked in Oakland, Calif., are preparing to be quarantined at military bases.

The national total of infections surpassed 700, contributing to the cancellation of mass gatherings like the St. Patrick’s Day parade in Boston. 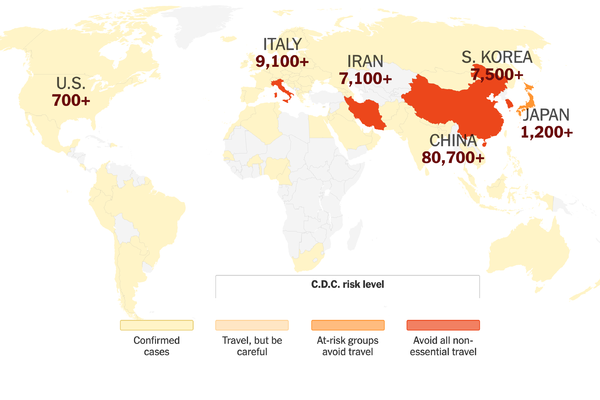 Coronavirus Map: Tracking the Spread of the Outbreak

Hubei Province, at center of the outbreak, hints at lifting some travel restrictions.

While the coronavirus prompts shutdowns and economic alarm across the world, the Chinese province where the epidemic began announced that it would — ever so carefully — restart business and manufacturing.

Leaders in Hubei Province, the source of the global outbreak, laid out plans on Monday after the province recorded a significant fall in the daily number of new infections and deaths from Covid-19, the disease caused by the virus.

Ying Yong, the province’s highest-ranking official, said the government would lift travel restrictions in areas of low risk to allow workers to get to their jobs. The risk level for each area of the province would be rated and those in low-risk areas would soon be allowed to travel.

Since January, much of Hubei has been under a lockdown that has deterred tens of millions of residents from moving around, or even leaving their homes.

“Currently, epidemic containment in Hubei Province has been shown promising developments and a sustained positive momentum, but the tasks of prevention and control remain arduous,” Mr. Ying told officials, according to the official Hubei Daily on Tuesday.

At the same time, Mr. Ying added, the province would “advance the planning so that people can move around in a safe and orderly way and enterprises can revive production.”

Mr. Ying did not spell out what would happen in Wuhan, the provincial capital, but his wording suggested that the city would remain cordoned off for now, even if the rest of Hubei loosened up.

A shifting presidential view on vaccines.

President Trump has been promising the imminent arrival of a vaccine to halt the spread of the coronavirus.

Federal health officials have repeatedly pointed out that his timetable is off — it will take at least a year — but Mr. Trump’s single-minded focus on warp-speed production of a new vaccine represents a striking philosophical shift.

For years, he was an extreme vaccine skeptic who not only blamed childhood immunizations for autism — a position that scientists have forcefully repudiated — but once boasted he had never had a flu shot.

At least a decade before Mr. Trump was elected president, with responsibilities that would include nominating experts to lead the nation’s health centers, the hotelier and commercial developer was holding forth with great confidence about medical topics. When an interviewer would note that physicians disagreed with the dim view he took of vaccines, Mr. Trump remained ever ebullient, impervious and dismissive of scientific authority.

While Mr. Trump was promising quick action on a vaccine, he also announced on Monday that he would work with Congress on measures to bolster the economy following the steepest market drop in more than a decade, fueled by fear over the coronavirus outbreak.

Mr. Trump told reporters at the White House that he would meet with Senate leaders and House Republicans on Tuesday to discuss a “very substantial” payroll tax cut and legislation intended to protect hourly wage earners who may have to miss work because of the virus. He also said he would ensure that the Small Business Administration extends more loans.

“This was something that we were thrown into, and we’re going to handle it, and we have been handling it very well,” Mr. Trump said.

Investors in the Asia-Pacific region were looking to find their footing on Tuesday, one day after the coronavirus and a battle among the world’s biggest oil producers shook global financial markets.

Many of the markets in the Asia-Pacific region were trading modestly higher by midday on Tuesday. Hong Kong, the region’s biggest gainer, was up more than 1 percent at midday. Futures markets indicated that Wall Street and Europe would open higher.

Government bonds, a safe haven, continued to indicate that investors were searching for security. Yields on U.S. government debt rose slightly but remained close to record lows. The price of gold fell slightly, revealing that investor skittishness had eased slightly.

The modest moves followed Wall Street’s worst day in over a decade. In Asia and Europe, some of the biggest financial exchanges flirted with, or crossed into, bear market territory on Monday.

The price of oil, which had slumped by a quarter on Monday, crept back up over 2 percent to about $36.80 a barrel. Two of the world’s biggest oil producers, Saudi Arabia and Russia, are engaged in a price war, and demand for oil around the world has fallen as the coronavirus spreads, halting global travel. Low oil prices are good for drivers at the pump, but they unsettle dozens of countries that depend heavily on the price of oil to keep their currencies afloat and their economies running.

The Saudi oil price cut is being felt around the world.

The sudden upheaval in the oil markets may claim victims around the world, from energy companies and their workers to governments whose budgets are pegged to the price of crude.

The fallout may take months to assess. But the impact on the American economy is bound to be considerable, especially in Texas and other states where oil drives much of the job market.

With the coronavirus outbreak slowing trade, transportation and other energy-intensive economic activities, demand is likely to remain weak. Even if Russia and Saudi Arabia resolve their differences — which led the Saudis to slash prices after Russia refused to join in production cuts — a global oil glut could keep prices low for years.

Many smaller American oil companies could face bankruptcy if the price pressure goes on for more than a few weeks, while larger ones will be challenged to protect their dividend payments. Thousands of oil workers are about to receive pink slips.

The battle will impose intense hardship on many other oil-producing countries as well, especially Venezuela, Iran and several African nations, with political implications that are difficult to predict.

The only winners may be drivers paying less for gasoline — particularly those with older, less fuel-efficient cars, who tend to have lower incomes.

“This is a clash of oil, geopolitics and the virus that together have sent the markets spiraling down,” said Daniel Yergin, the energy historian. ”The decline in demand for oil will march across the globe as the virus advances.”