The coronavirus continued its punishing march on Tuesday as more United States governors ordered their citizens to stay at home, more states pleaded for rapidly diminishing stocks of emergency supplies, and more experts predicted that the devastating economic effects of the pandemic could stretch into next year.

In Florida, the state’s Republican governor belatedly issued a stay-at-home order for residents — but only after a morning telephone call with President Trump, who later said he still had no plans for a similar national directive.

In Washington, Democrats and Republicans in Congress, as well as President Trump, are increasingly looking toward enacting a huge new infrastructure plan that could create thousands of jobs.

And in New York, where hundreds of new deaths pushed the tristate region’s toll past 2,300, Gov. Andrew M. Cuomo pleaded for a supplies for his overwhelmed hospitals and desperate health care workers. “Really, the only hope for a state at this point is the federal government’s capacity to deliver,” Mr. Cuomo said.

The problem is that the federal government has nearly emptied its emergency stockpile of protective medical supplies like masks, gowns and gloves, according to a senior administration official, and some states desperate for much-needed ventilators received them only to discover that the machines did not work.

Another jaw-dropping number is expected in the United States on Thursday when the government reports the number of new unemployment claims filed across the country last week.

Several estimates put the figure at roughly five million. That would come on top of the previous week’s claims, which came in at 3.3 million — a total that could be revised upward when the Labor Department issues its report at 8:30 a.m. Eastern time.

The speed and scale of the job losses is without precedent. Until the coronavirus outbreak caused widespread workplace shutdowns and layoffs, the worst week for initial unemployment filings was 695,000 in 1982.

The economic damage from the pandemic was initially concentrated in tourism, hospitality and related industries. But now the pain is spreading much more widely. The Institute for Supply Management said Wednesday that the manufacturing sector, which had recently begun to recover from last year’s trade war, was contracting again. Data from the employment site ZipRecruiter shows a steep drop in job postings even in industries such as education and health care that are usually insulated from recessions.

Biden calls for Democratic convention to be delayed.

Former Vice President Joseph R. Biden Jr. on Wednesday night called for moving the Democratic National Convention from mid-July to August, making him the most prominent member of his party to say the convention must be rescheduled because of the coronavirus outbreak.

“I doubt whether the Democratic convention is going to be able to be held in mid-July, early July,” Mr. Biden told Jimmy Fallon on “The Tonight Show.” “I think it’s going to have to move into August.”

Mr. Fallon had not asked Mr. Biden about the convention’s timing. The former vice president was responding to a question about how the virus would affect the election.

Katie Peters, a spokeswoman for the Democratic National Convention Committee, said after Mr. Biden’s remarks that she expected the committee to reveal more details about changes to convention plans by the end of this week.

To enforce new rules, British police use drones, shaming and a ban on Easter egg sales.

Just weeks ago, Prime Minister Boris Johnson seemed genuinely shocked at the suggestion that the police should enforce a coronavirus lockdown in Britain.

But that was before he introduced the most stringent restrictions in recent memory and instructed the authorities to enforce them.

Some police officers have done so with such gusto that a ferocious debate is underway about the balance between collective responsibility and individual liberty.

Few doubt the need for extraordinary measures to prevent the spread of an illness that has already claimed at least 1,789 lives in Britain and infected thousands more, including Mr. Johnson himself.

In one instance, a drone zoomed in on six parked cars and a truck and flashed a stern message: “These vehicles should not be here.”

Next to be shamed was a couple walking a dog on a lonely path. Captured on a film, released by the Derbyshire police, their stroll was judged “not essential” and therefore in breach of British social distancing rules.

Small stores have been instructed that not to sell chocolate Easter eggs because they are “nonessential” items.

Jonathan Sumption, a former Supreme Court judge, offered praise on Monday for the work of many police forces but also expressed alarm at some overly zealous enforcement.

“In some parts of the country, the police have been trying to stop people from doing things like traveling to take exercise in the open country, which are not contrary to the regulations, simply because ministers have said they would prefer us not to,” he told the BBC. “The police have no power to enforce ministers’ preferences, only legal regulations.”

The mayor of Los Angeles asks all residents to cover their faces when in public.

Mayor Eric Garcetti of Los Angeles on Wednesday urged all the city’s residents to use homemade face coverings when in public or interacting in public.

“This isn’t an excuse to suddenly all go out,” he said during a news conference, “but when you have to go out, we are recommending that we use nonmedical grade masks, or facial coverings.”

Mr. Garcetti stressed that Angelinos use cloth face coverings, and not surgical and N95 masks, which are reserved for first-responders and medical workers. “This could save or cost a doctor or nurse their life, so we need to protect them,” he said.

The directive, he said, was in line with guidance from Gov. Gavin Newsom and Dr. Barbara Ferrer, the director of Los Angeles County’s Public Health Department.

In a tweet, Mr. Garcetti also referred to new data that suggests many who are infected are not symptomatic.

The U.S. military faces competing missions: prepare for war or fight the coronavirus?

More than 1,200 U.S. military personnel and their family members are affected by coronavirus, leaving the Defense Department virtually at war with itself over two competing instincts: protecting troops from the virus and continuing its decades-old mission of patrolling the globe and engaging in combat, if ordered to do so.

The Navy is thus far refusing to completely evacuate an aircraft carrier where 93 service members have been confirmed to be infected with the coronavirus. Defense Secretary Mark T. Esper has put himself on the side of business as usual in maintaining readiness while also saying that force protection is a top priority. President Trump, for his part, threatened a familiar foe, tweeting on Wednesday that Iran would “pay a very heavy price” if its proxies attacked American troops or assets in Iraq. Other Defense Department officials continued to insist that the aircraft carrier, the Theodore Roosevelt, remain ready to carry out its missions.

The commander of the Roosevelt, Capt. Brett E. Crozier, pointed out in a strongly worded letter that “we are not at war.” That statement raised questions from the Pacific to the Pentagon of what was so important about the aircraft carrier’s presence off the coast of Guam that the Defense Department could not evacuate the ship and do a deep cleaning, as suggested by Captain Crozier.

U.S. warships typically spend months at sea monitoring the activities of adversaries. The ships assigned to the Pacific Fleet patrol the South China Sea, the East China Sea and areas in between, sometimes undertaking so-called freedom of navigation operations that bring them close to disputed islands in the area. The goal of these voyages is to drive home to China that the United States does not recognize Beijing’s claims of ownership.

American warships in the region are also keeping an eye on the nuclear and missile threat from North Korea. And they sit ready to deploy to the Arabian Sea and the Persian Gulf if tensions — with, say, Iran — flare up.

But for the moment, the virus has proved far more damaging than any recent encounters with traditional adversaries and exposed a vulnerability of a force often referred to as the world’s policeman. For all the focus on the battles in Afghanistan, Iraq, Syria, Yemen and the power conflict with China and Russia, none has come close to crippling an American aircraft carrier in days.

The Pentagon said on Wednesday it would send 540 additional troops to the Southwest border to counter any potential flow of migrants who are infected with the coronavirus.

Lt. Gen. Laura Richardson of the military’s Northern Command told reporters on Wednesday that the deployment would be happening “very soon.”

Trump rebuffs demands to lift tariffs even as the economy falters.

President Trump continues to resist calls from hundreds of companies to drop tariffs he has placed on foreign goods, arguing that the levies do not impose costs on American companies, despite economic evidence to the contrary.

The Trump administration has been weighing an executive order that would defer tariff payments on some imports, though not cancel the levies outright. But Mr. Trump said Tuesday evening that he had yet to approve the measure, and it was not clear if the administration would ultimately proceed with it.

“That might be, but I’m going to have to approve the plan,” Mr. Trump said of lowering tariffs. He pushed back on news reports that he had made a decision, saying, “I approve everything and they haven’t presented it to me, so therefore it’s false reporting.”

People familiar with the deliberations say the administration has been weighing such a deferral, which would apply to the “most-favored nation” tariffs the United States has long imposed on goods from around the globe, rather than the levies Mr. Trump has imposed on Chinese products or foreign metals.

Mr. Trump has been reluctant to reduce any tariffs because he does not believe they hurt American businesses and are instead being paid for by China and other countries. 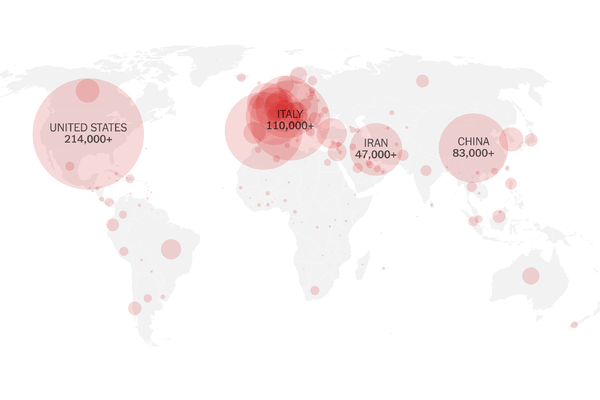 How to tweak your home to serve you better now

Your home is currently serving as a work space, living space and possibly a school and playground. It wasn’t designed for all these disparate tasks, but there are things you can do to make your home more comfortable for you and your family in these times.