(Want to get this briefing by email? Here’s the sign-up.)

The number of jobless claims the Labor Department reported today is 10 times the weekly record set in 1982.

On the heels of the previous week’s report of more than three million job losses, about 10 million people total are newly out of work. In just two weeks, the coronavirus has roughly matched the jobs carnage of the 2008 financial crisis.

Last week, the tourism and hospitality industries bore the brunt. This week, the wave extended to usually recession-proof sectors like education and even health care. Still, Wall Street closed significantly higher, buoyed partly by a rise in oil prices and a suggestion by President Trump that a price war between Russia and Saudi Arabia could be ending.

The $1,200 stimulus checks that are supposed to help Americans during this crisis require filing a tax return, even for many low-income people who aren’t usually required to file. Social Security recipients have been exempted from having to file a return.

The Times is providing free access to much of our coronavirus coverage, and our Coronavirus Briefing newsletter — like all of our newsletters — is free. Please consider supporting our journalism with a subscription. 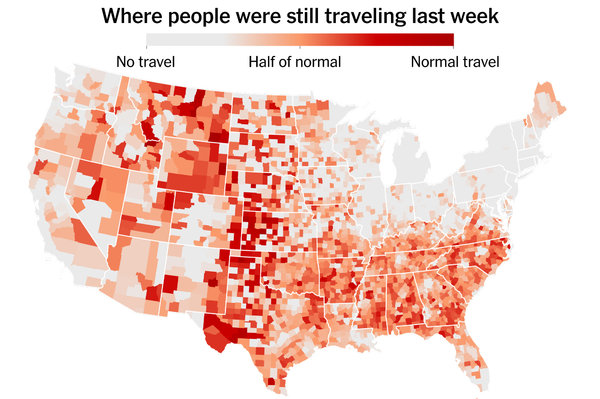 Where America Didn’t Stay Home Even as the Virus Spread

2. People changed their travel habits far less in parts of the U.S. that waited to impose stay-at-home orders.

Those areas are at higher risk of becoming the next hot spots, and they could eventually act as reservoirs of the coronavirus, reigniting it in places that have contained it.

The number of cases worldwide surpassed one million, and the U.S. has more than a fifth of those. Almost 100,000 are in New York State, and about half of those are in New York City, where nearly everyone knows someone who is sick.

Across the country, hospitals are starting to run low on critical drugs for treating patients with the coronavirus. Workers in a number of fields are worrying about exposure to the virus. Hear from them in their own words.

The C.D.C. appeared set to recommend that everyone wear masks in public.

3. Speaker Nancy Pelosi said she would form a special bipartisan committee to oversee the government’s coronavirus response, including how it distributes more than $2 trillion in emergency aid. The top House Republican immediately objected.

While barred from receiving bailout money, the Trump Organization is exploring whether it can delay payments on loans, our reporters found.

Mr. Kushner has become central in the White House’s efforts to fight the coronavirus. Our reporters heard mixed reviews of the performance of his team, which is drawn partly from the private sector and has been nicknamed “the Slim Suit Crowd” (for the cut of members’ outfits) by critical FEMA officials.

4. The Democratic National Convention was delayed.

The move is the pandemic’s biggest disruption to the political calendar so far, and comes after Joe Biden, his party’s likely presidential nominee, called for a delay.

In nearly two dozen interviews with his donors and allies, our politics reporters heard two names come up repeatedly: Senators Kamala Harris and Amy Klobuchar. Above, Mr. Biden at a rally in Detroit last month with Ms. Harris and Gov. Gretchen Whitmer of Michigan.

And Wisconsin is moving ahead with elections on Tuesday that include both presidential primaries, a statewide Supreme Court race and local contests. Thousands of town clerks and poll workers, most of them older, will be put on the pandemic’s front lines.

5. What will happen to special education?

The $2.2 trillion coronavirus stimulus bill gives the education secretary, Betsy DeVos, the power to waive school districts’ obligations to provide education to students with special needs. Above, a special-education teacher in Alabama and her daughter, who has special needs.

Extensive services, like tutoring and behavioral help, are required to comply with the federal Individuals With Disabilities Education Act and cannot easily be moved online. But they’re critical for students with special needs to receive an education comparable to that of their peers.

Parents fear the exemptions could be the end of student disability rights.

6. In India, an assault on independent journalism.

India has long had one of the most vibrant news media ecosystems in the world, but the government of Prime Minister Narendra Modi is cracking down, especially on the airwaves, in a bid to further transform the world’s largest democracy into a Hindu nationalist state.

“Publish the official version” is now the law of the land amid a national coronavirus lockdown that has produced starvation deaths. Above, Ravish Kumar, managing editor with New Delhi Television, which has come under particular pressure.

“A large section of the Indian media has become a lap dog, not a watchdog,” said one of the country’s leading news anchors, Rajdeep Sardesai.

7. Are we witnessing the apocalypse?

People of many faiths, and even none at all, are asking this question as the coronavirus pandemic becomes what some see as the latest sign that the end of the world is near.

The story is one of the oldest in human history. In many religious traditions, including Christianity, Judaism, Islam and Buddhism, it arises in times of social and political crisis. Above, the American artist Benjamin West’s vision in 1796, “Death on the Pale Horse.”

But for the leaders of several former Soviet republics, there is no global emergency.

Authorities in Turkmenistan, Tajikistan, Belarus and elsewhere continue to deny the severity of the pandemic, as they promote folk remedies like drinking vodka and continue to hold mass gatherings.

As an athlete, how do you cope when the sport you’ve dedicated yourself to is postponed a year and you’re confined to your home?

The grief over deferred dreams can be heavy, especially for teenage female Olympic gymnasts, who tend to make it to just one Summer Games before they are too physically mature. Above, MyKayla Skinner of the U.S., who said competing in 2021 would be a major challenge.

But life goes on, and Olympic athletes show how they’re coping in videos they sent to The Times. One strums some dulcet tones on a ukulele.

9. With museums and galleries largely shuttered, some of the world’s great fine art photographers are reaching out on Instagram.

In cities like Florence, Italy, and Shanghai, their images capture the beauty, pain and solitude of life under lockdown.

Above, Tahmineh Monzavi’s image out her window of the inauspicious beginning of spring in Tehran.

10. And finally, drinking with the neighbors (at a very safe distance).

That’s one of the ways readers around the world said they were handling their lockdowns in submissions to the 36 Hours column — the first to be published by our Travel section that involves, well, no traveling. Above, photographs from readers.

Beverly Dalton, in Manila, recommended a little meditation. “A litany of gratitude and a remembrance of the good things that have passed can help the mind and the soul,” she wrote.

Have a pleasantly immobile evening.

Your Evening Briefing is posted at 6 p.m. Eastern.

And don’t miss Your Morning Briefing. Sign up here to get it by email in the Australian, Asian, European, African or American morning.

Want to catch up on past briefings? You can browse them here.

What did you like? What do you want to see here? Let us know at [email protected].