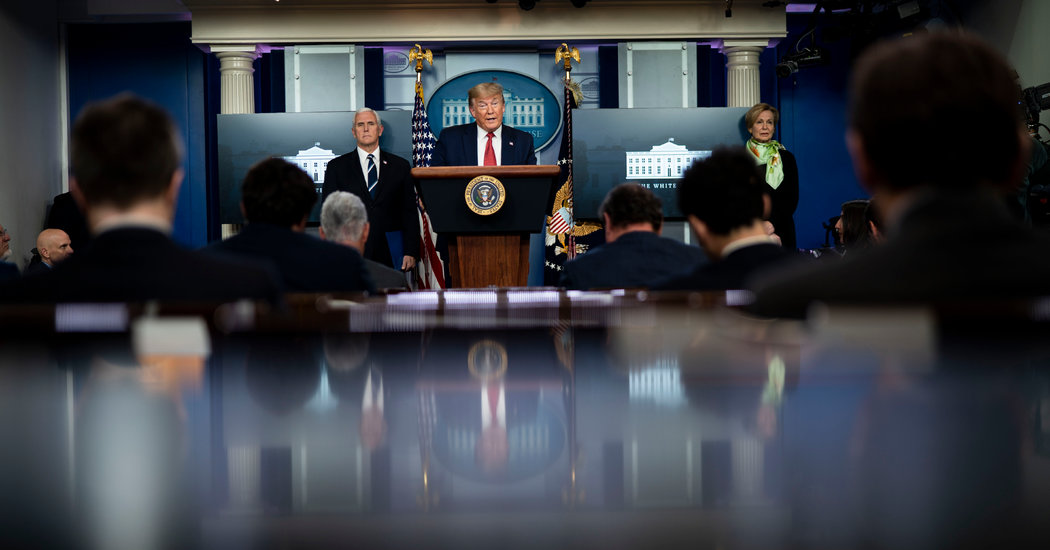 On Tuesday, as the number of reported deaths from Covid-19 in the United States topped 70,000, the Trump administration declared “mission accomplished” for Phase 1 of its fight against the coronavirus.

Specifically, President Trump and Vice President Mike Pence announced that the coronavirus task force, which Mr. Pence oversees, had been so successful in getting the pandemic under control that the group would most likely disband within the month, to be replaced by a new panel focused on getting America back to work.

“We will have something in a different form,” Mr. Trump explained during his tour of a mask manufacturing plant in Phoenix, at which he did not wear a mask despite signs requesting that one be worn “at all times.” He said that America had moved on to “the next stage of the battle” and that “now we are reopening our country.”

“It really is all a reflection of the tremendous progress we’ve made as a country,” Mr. Pence told reporters at the White House.

By Wednesday morning, Mr. Trump had changed the contours, though not the essence, of his plan. In a tweet thread, he said the coronavirus task force would, in fact, “continue on indefinitely” but shift its efforts — and most likely some of its members — to “focus on SAFETY & OPENING UP OUR COUNTRY AGAIN.” He closed with, “The Task Force will also be very focused on Vaccines & Therapeutics. Thank you!”

Whether dissolved or repurposed, the White House Task Force focused on coordinating the administration’s public-health response to the pandemic is soon to be no more. To which we can only say: No big loss.

In theory, bringing together a collection of experts to oversee a coordinated federal response to a national emergency makes perfect sense. In practice, the first phase of Mr. Trump’s coronavirus task force was its own form of disaster.

For starters, the president made clear early on that he wasn’t interested in marshaling a coordinated response. Time and again, he ducked responsibility, pushing it off on the governors. On challenges ranging from acquiring critical medical supplies to coordinating and expanding testing (which remains a problem) to managing social-distancing restrictions, the task force has provided consistently uneven guidance and insufficient assistance.

Mr. Trump often has undermined the recommendations it has made. Whether pushing dangerous treatments of unproven efficacy or urging his supporters to protest the basic social distancing guidelines put forward by the task force, the president has repeatedly scrambled the public-health message.

Complicating matters, multiple factions within the task force emerged with their own plans and priorities. These include a group of health officials overseen by the head of the White House Domestic Policy Council; a smaller group of medical doctors focused strictly on health matters; and yet another shadow task force led by Jared Kushner, the president’s son-in-law.

It’s little wonder the task force’s communication often has obscured more than it has clarified.

The public manifestation of the task force has been a series of rambling briefings, at which assembled experts from in and outside government have wound up as little more than political props. The briefings often have descended into a blend of therapy sessions and campaign rallies, with the president spending hours each week airing his many grievances, praising himself, parading out business executives and public officials to laud his leadership and spreading misinformation about the virus and the administration’s handling of it.

Where is the website developed by Google that the president, back in March, promised would soon enable people nationwide to check their symptoms and “facilitate testing at a nearby convenient location”? The sprawling, easily accessible network of drive-through testing sites in the parking lots of retailers that Mr. Trump also promised in March is still struggling to ramp up. All too often, the president has overpromised and underdelivered — if he delivered at all. On April 28, Mr. Trump boasted that the United States would “very soon” be able to conduct five million diagnostic tests a day. The next day, he had to walk back that claim — insisting, of course, that he had never made it.

The briefings obviously have been a poor use of time for task force members, who help prepare the president’s talking points and then must stand around for hours during his performances. In addition to fielding questions from the media, they also need to respond to (and diplomatically shoot down) Mr. Trump’s more dangerous nonsense, such as when he mused about possibly injecting Covid-19 patients with disinfectant. That surreal suggestion led the makers of Clorox and Lysol to plead with Americans not to drink or inject their products.

So reconfiguring the task force is unlikely to have many concrete negative effects. It seems mostly to be a P.R. move, a way for Mr. Trump to push his message — untethered from the consensus view of public health officials or public opinion — that the worst of the pandemic has passed.

In its coming incarnation, the task force is expected to have a partially new cast of characters, with less emphasis on scientists and more on economic advisers. On Tuesday, Mr. Pence noted that administration officials already have been discussing how to transition the response down to the agency level. If this means that the Centers for Disease Control and Prevention and other agencies will be empowered to take greater control, and suffer less meddling from Mr. Trump, all the better.