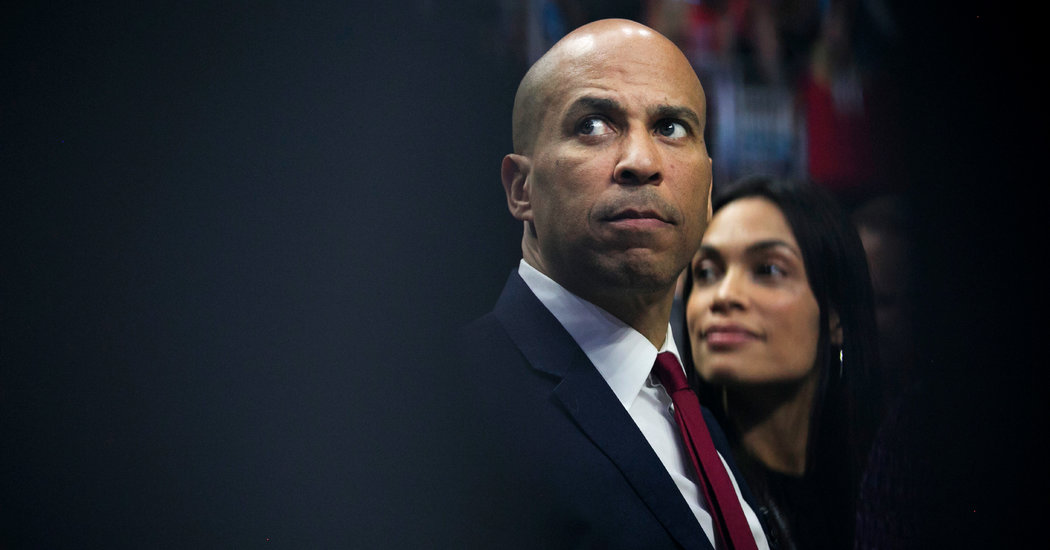 For almost two decades, Senator Cory Booker of New Jersey has been viewed as a future leader in the Democratic Party, a former Rhodes scholar and Stanford football player who achieved national prominence as mayor of Newark.

With a vibrant social media following and a Rolodex of influential donors on Wall Street and in Silicon Valley, he swept to election to the Senate and gained a spot on the powerful Judiciary Committee. In 2016, Hillary Clinton considered Mr. Booker as a potential running mate, and last winter he took the step many Democrats had predicted, announcing a presidential bid built around a message of national unity.

But on Monday, that promise remained unfulfilled, as Mr. Booker ended his campaign for the White House after nearly a year of grinding work on the campaign trail that yielded only low-digit polling, lackluster fund-raising and a surprising inability to electrify the broader electorate.

“I got in this race to win, and I’ve always said I wouldn’t continue if there was no longer a path to victory,” Mr. Booker said in a statement to supporters.

The departure of Mr. Booker, 50, from a crowded Democratic field, heralded at the outset as the most diverse in history, leaves just one African-American candidate, Deval Patrick, vying for the nomination, in a party where black voters are an essential bloc of the Democratic base.

Mr. Booker often made his case for the presidency through his biography: as a black man whose family had to overcome racist housing discrimination in New Jersey, and as a mayor of a predominantly black city who saw the harm caused by hard-line criminal justice laws.

Throughout his campaign, Mr. Booker cast a spotlight on his adopted home city. He spoke of witnessing shootings on the same street corner where he currently lived, and of lives of young men in Newark ruined over low-level drug crimes like marijuana possession. He frequently said on the debate stage and on the stump that he was the “only candidate who lives in a low-income, black and brown community.”

Reforms he made in Newark, from schools to policing, framed the backbone of his policies, though he was also criticized for lapses by the police department and a controversial charter schools effort that did not lead to immediate improvements.

He began his campaign last Feb. 1, the first day of Black History Month, with a clarion call for unity in a deeply polarized time. He was unrelenting in his optimism and his push for love and healing, a message he stubbornly pushed throughout the primary even as it consistently fell flat with voters energized by a fervent dislike of President Trump.

And despite introducing notable policies on gun control, criminal justice reform and the racial wealth gap, his candidacy lacked a defining issue or position on the ideological spectrum in a contest defined more by the divide between the progressive and moderate wings of the Democratic Party.

But his campaign also suffered from factors beyond its control. In a historically diverse field, Mr. Booker struggled for attention amid the excitement of new candidates like Senator Kamala Harris of California, who allowed voters to imagine a black woman as president, or Mayor Pete Buttigieg of South Bend, Ind., whose campaign as an openly gay man is also historic.

Aspects of Mr. Booker’s political life that were advantages for decades suddenly became less so. His broad fund-raising base of Wall Street bankers, pharmaceutical executives and Silicon Valley billionaires had become pariahs to many Democrats, who viewed the influence of big donors as corrosive. Rivals like Senators Elizabeth Warren and Bernie Sanders moved exclusively to small dollar fund-raising and sought to make that a litmus test for the Democratic field.

The decision to drop out of the race came over the weekend, aides said, with Mr. Booker huddling with top staff members as he wrestled with the decision. On Sunday, he told his wider staff.

The decision to drop out largely came down to finances. Despite years of relationships in the finance world of New York and the high-tech corridors of California, Mr. Booker struggled to raise money throughout 2019. All told, he collected about $22.1 million — less than Mr. Sanders, former vice president Joseph R. Biden Jr. or Mr. Buttigieg raised just in the fourth quarter.

Money was so tight that Mr. Booker had scheduled fund-raisers in the final two-week sprint of his campaign in California and New Jersey — far from the crucial battlegrounds of Iowa and New Hampshire.

Mr. Booker had not invested heavily in a digital donor program in advance of his run, and he never successfully turned on the spigot of small, grass-roots contributions as some of his rivals did. Entering October, he had raised only $4.3 million from donations of less than $200, less than the total haul, for instance, of Mr. Sanders in his first 24 hours as a candidate.

Still, Mr. Booker had an enviable stable of more than 100 bundlers who are now up for grabs, including the billionaire Donald Sussman, one of the Democratic Party’s most generous donors.

In a final push to inch up in Iowa polling and make the January debate stage, Mr. Booker’s campaign ran roughly $300,000 in television ads in Iowa in the past two weeks, a modest sum in a race dominated by the millions spent on the airwaves by Mr. Steyer and former Mayor Michael R. Bloomberg of New York. The ads pushed Mr. Booker’s advertising budget, and campaign budget, to their limit.

After Mr. Booker fell short of qualifying for a second consecutive debate, denying him the fund-raising boost that often accompanies the national broadcast, his campaign was in a difficult position of trying to raise money from traditional, in-person fund-raisers while also juggling his Senate duties, including a looming impeachment trial. And without a large war chest of campaign funds, Mr. Booker would not be able to air television ads while he was stuck in Washington during impeachment, putting him at a significant disadvantage compared with his well-funded opponents.

“Our campaign has reached the point where we need more money to scale up and continue building a campaign that can win — money we don’t have, and money that is harder to raise because I won’t be on the next debate stage and because the urgent business of impeachment will rightly be keeping me in Washington,” Mr. Booker told supporters on Monday.

So Mr. Booker will return to run for re-election in New Jersey, where he still enjoys favorable ratings. The state leans decidedly Democratic and has not elected a Republican senator in nearly 50 years.

Though the core of his presidential campaign was built on emotional ideals, Mr. Booker focused heavily on policies that deeply affected cities like Newark, where he was mayor for seven years. He pledged to offer sweeping clemency to thousands of nonviolent drug offenders, and he pushed some of the other Democratic candidates to embrace more aggressive stances on gun control, becoming the first candidate in the field to propose a national gun licensing program.

And he focused constantly on addressing the racial wealth gap, including an economic proposal known as baby bonds that would create a government-run savings account for every child born in the United States.

Though his departure from the race is unlikely to have much of an effect on other candidates’ polling, the Booker campaign was a leader in endorsements in Iowa and New Hampshire and had a particularly notable staff of Iowa organizers, setting up a likely scramble by the remaining candidates to secure both endorsers and staff members in the early nominating states.

Nearly all of the remaining Democratic candidates praised the campaign Mr. Booker ran, and on Monday many shared photographs of Mr. Booker offering them a hug or posing for a selfie with a voter. Mr. Biden said Mr. Booker had “campaigned with joy and heart.” Andrew Yang, who formed a friendship with Mr. Booker on the campaign trail and regularly exchanges text messages with the senator, said he would miss seeing Mr. Booker (and his girlfriend, the actress and activist Rosario Dawson) on the trail.

“You’ve always been a powerful voice for justice and equality, and you’ve made this primary stronger,” said Senator Elizabeth Warren of Massachusetts.

In a video released Monday, which was backed by a gospel-like piano track and drumbeat and featured a greatest-hits rundown of his message on the campaign trail, Mr. Booker was upbeat until the end.

“So now I recommit myself to the work,” Mr. Booker said. “I can’t wait to get back on the campaign trail and campaign as hard as I can for whoever is the eventual nominee and for candidates up and down the ballot.”

Mr. Booker also showed a touch of humor on Monday. When a celebrity gossip website published an article noting that Mr. Booker’s exit had supporters mourning the loss of the possibility that Ms. Dawson would become first lady, Mr. Booker responded on Twitter, his favorite medium.

“Have you been talking to my mom?” he said.