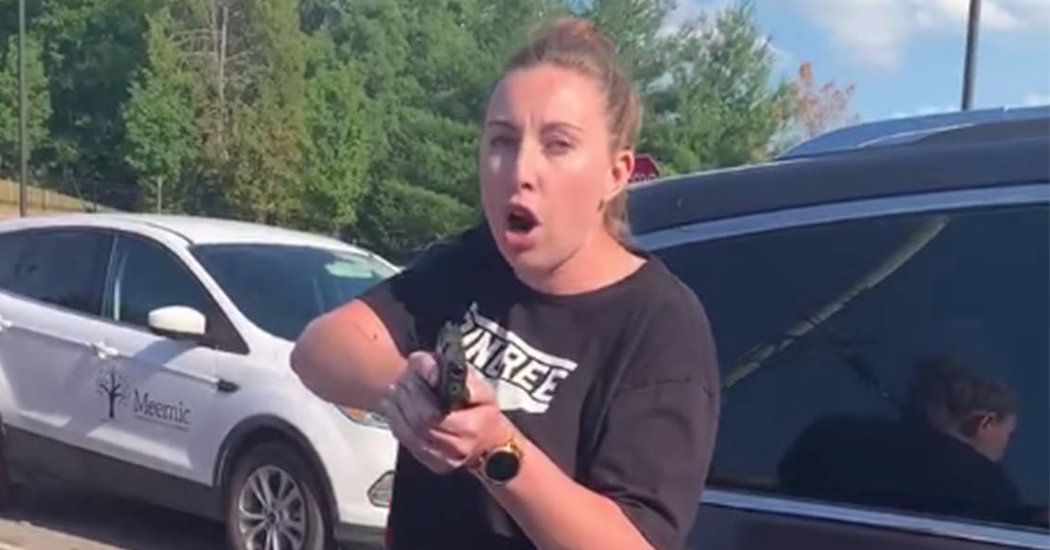 A couple have been charged with felonious assault after widely circulated videos showed a white woman pointing a gun at a Black woman in a parking lot in Michigan, the authorities said on Thursday.

In the videos, the Black woman and her teenage daughter confront a white man and woman outside a Chipotle restaurant in Orion Township, Mich., on Wednesday. The exchange quickly escalates from an argument about an apology into accusations of racism, with a gun held only a few feet from the Black woman as she filmed with her cellphone.

At a news conference on Thursday, Sheriff Michael Bouchard of Oakland County, Mich., said the woman who had pointed the gun and her husband had each been charged with felonious assault, which carries a maximum penalty of four years in prison.

Both had guns in their possession, which they were legally permitted to carry, when they were taken into custody, Sheriff Bouchard said.

The sheriff explained the charges by saying that “any weapon that could cause serious and potentially deadly injury can be charged as a felonious assault.”

The episode began when the two parties bumped into each other outside of the Chipotle, Sheriff Bouchard said.

He urged members of the public to try to defuse tense situations at a time when many are on edge.

“My plea is, please let us all try to be that voice of calm in the storm, and remember each one of us is a human being that deserves respect,” he said.

Oakland University in Michigan said on Thursday that it had fired Mr. Wuestenberg. He had been listed on the university’s website as a coordinator of veterans support services.

“We have seen the video and we deem his behavior unacceptable,” a university spokesman said in a statement. “The employee has been notified that his employment has been terminated by the university.”

It was not immediately clear if the couple had lawyers, and there was no immediate response to messages left at numbers listed under their names.

As the videos spread on social media on Wednesday night, they quickly drew comparisons to footage taken on Sunday of a white man and woman pointing a semiautomatic rifle and a handgun at peaceful Black protesters on a private residential street in St. Louis. The demonstration was one of dozens against racism and police violence that have been taking place across the country for weeks.

The Detroit News, which reported on the Orion Township altercation early Thursday, shared both videos, the longer of which — at just over three minutes — shows more of the encounter. The News identified the mother as Takelia Hill and quoted her as saying that the argument began because the white woman had bumped into her daughter and was yelling “in my daughter’s face.” Ms. Hill could not be reached for comment.

The videos, recorded by Ms. Hill and her daughter on Wednesday evening, do not show what happened before the argument began. In one of the videos, Ms. Hill can be seen standing in front of the white woman, and her daughter says, “This ignorant woman bumped into a 15-year-old.”

After an angry, profanity-laced exchange, including accusations of racism and demands that the police be called, the white woman returns to her minivan and says through a lowered window that “you cannot just walk around calling white people racist.”

As she speaks, Ms. Hill repeatedly asks, “Why would you bump her?”

The camera briefly turns away from the minivan as it backs out of a parking spot, and the teenager shouts for her mother to watch out.

Ms. Hill then asks whether the couple were trying to hit her with the minivan, and hits the back of the vehicle with her hand. The white woman exits the car holding a handgun and, using profanity, tells Ms. Hill to “get away.” The woman cocks the gun and points it at Ms. Hill, who is standing a few feet away.

“You’re going to shoot me?” Ms. Hill says, and she, her daughter and the armed woman ask for someone to call the police. The woman tells Ms. Hill not to jump behind her car, which Ms. Hill denies doing, and then the woman begins to scream at Ms. Hill to back away. Crying can be heard. The woman eventually lowers the gun and gets back in the minivan, and it pulls away.

“Call the police, no, don’t go anywhere,” Ms. Hill says. “You were about to hit me with the car.”

Her daughter can be heard saying: “These white people, they’re so racist. They pulled a gun out on my mom.”

Sheriff Bouchard said the authorities responded after they received six 911 calls related to the altercation, each of which he played at the news conference on Thursday. He said officers ordered the white woman out of the van, put her on the ground, handcuffed her and took her gun.