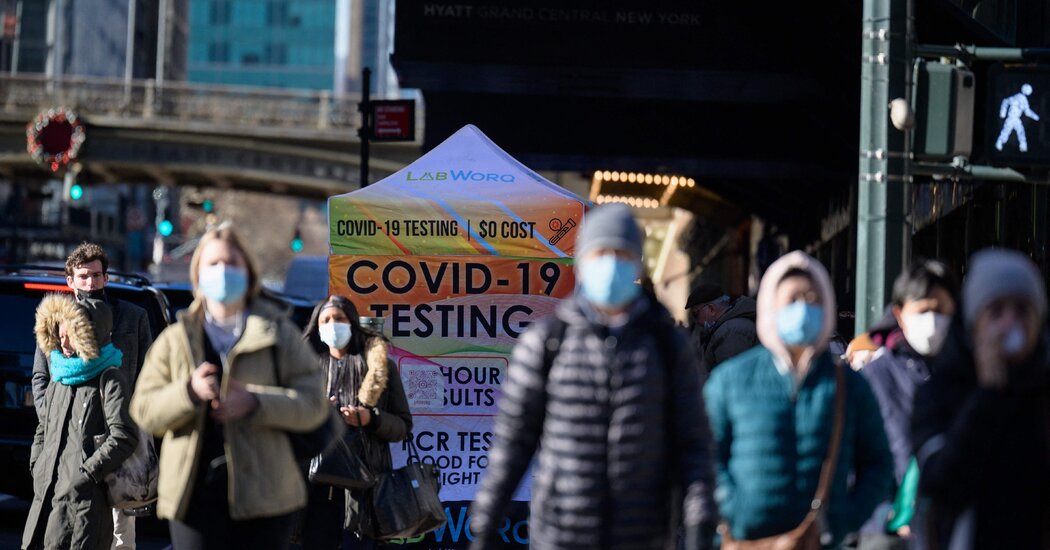 Bret Stephens: Happy ’22, Gail. Hope your year is off to a good start. Eager to get your thoughts on Covid 3.0, which nearly every other person I know seems to have.

Gail Collins: Happy New Year, Bret. I had a nice long holiday with plane travel, visits to see family and friends, and a few other outings. No Covid interruptions whatsoever, but I have gotten warnings from friends whose friends are sick and a neighbor who just had a really bad episode.

But I remember other holidays in which the flu laid a bunch of people low. Still keep thinking that if everyone takes all the vaccine shots, wears masks in public and avoids scenes like, say, jam-packed bars, it’s still possible to live a pretty normal life.

Bret: I think we need to treat Omicron fundamentally differently than we did previous variants. Everyone should get vaxxed. But the idea that we can “stop the spread” or “flatten the curve” is unrealistic, probably unnecessary and possibly counterproductive.

Boosted people can still get sick, though for the most part not too severely. More than half of the people in New York City hospitals who have Covid aren’t there because of Covid. Testing doesn’t always detect the virus, and when it does, it’s often too late. Mask wearing hasn’t appreciably slowed it, at least not with the surgical or cloth masks most people prefer. And contact tracing is pointless with something that spreads this quickly. Maybe instead of trying to flatten the curve, we should accept the spike and think of Omicron as the coronavirus’s version of the old chickenpox party, the sort my mom took me to as a kid so I could get it over with and gain immunity.

Gail: It’s been interesting hearing some of the anti-vaxxers also denouncing other vaccines against childhood diseases. Still haven’t heard any of them call for bringing back smallpox.

Bret: A pox on them, metaphorically speaking. On a different subject, I bet you never found yourself being thankful to Dick Cheney for standing up for truth, decency and the American way.

Gail: Fortunately his daughter already prepared me to cheer for people I totally disagree with. Liz Cheney is pretty far on the far right when it comes to everything from taxes to abortion to guns, but she’s a great example of how principled people can break with their party when it comes to other profound issues, like last January’s riot.

Gail: I’ve run into the parents of childhood friends who I remembered as extremely cranky but found them very charming at 80. So Cheney Sr.’s new look wasn’t so surprising. Although those were dads who used to yell about curfews, and that’s not quite the same as invading Iraq.

But about Liz — I’ll bet a lot of Republicans in Congress agree with her deep in their little Trump-terrorized hearts. Don’t you think?

Bret: I used to think that. But now I think they are in denial so deep, it’s clinical. They’ve convinced themselves that the people who stormed the Capitol were misguided patriots, which is like saying that Harvey Weinstein was a clumsy romantic. They are keen to point fingers at Nancy Pelosi for not doing enough to secure the building, which amounts to indicting the victim for not doing enough to secure his possessions from thugs. They are upset that Democrats use the word “insurrection,” as if a violent attempt to overturn a democratic election ought better be described as a frat party that got a little outta hand. They fulsomely praise Mike Pence for doing his constitutional duty by refusing to interfere with the certification of the election but say nothing of the 147 congressional Republicans who would not accept the result. They carry on about Stacey Abrams refusing to accept her loss in the 2018 Georgia governor’s race but treat Donald Trump’s incessant, obsessive, demagogic, destructive lying about 2020 as just one of his exuberant personality quirks.

Gail: It is amazing how we can come together on non-government-spending issues.

Bret: There’s an old expression, from Poland, I think, that goes, “Not my circus. Not my monkeys.” Unfortunately for the country, the G.O.P. has become our national circus, with Tucker Carlson as its scowling ringmaster. Now the question is whether Democrats can govern effectively to keep the clown show from coming back to power. Are you hopeful?

Gail: You know, President Biden is the opposite of a crowd rouser, but at this moment it might be OK to have a national leader who’s just … sane and normal and principled.

He’s not going to lead the nation into any stupendous changes, but maybe right now the thing we’re looking for is “that good guy like my eighth-grade teacher.”

Bret: Even better would be a good guy who loudly insists that eighth-grade teachers in Chicago show up to work. Sorry, you were saying ….

Gail: My actual eighth-grade teacher, as I have alluded to, was a nun who told us, “Remember, the Romans killed Jesus, not the Jews.” The fact that I still recall that means it was an actual piece of information back then.

Bret: I’m glad your nun cleared that up. My Hebrew forebears were far too busy controlling the Roman media, financing Roman conquests and manipulating the Roman Senate to waste their malice on an unconventional rabbi.

Gail: And while we’re talking about cultural revolutions — I know this is before your time, but I remember as a teen hearing that Sidney Poitier won the Oscar for best actor and being so excited. I knew it was a big deal, and I guess the fact that the movie he won for, “Lilies of the Field,” was about this Black man helping a bunch of nuns meant a lot in our Catholic girlhood.

It just reminded me of all the times when any acknowledgment of Black achievement seemed like big news to the country.

Bret: A class act, as our colleague Charles Blow noted in a charming remembrance last week. For my generation, the corresponding analogy was the gay-rights movement in the 1980s, during the AIDS crisis. I remember watching the music video for a song called “Smalltown Boy” by the British band Bronski Beat, which made an impression. It was a small masterpiece of storytelling as well as a stunningly courageous and honest tale of coming out.

But getting back to Biden, I don’t think sane, normal and principled will do. I’m kinda hoping for “effective” and “canny.” We’ve been a little lacking in that department ….

Gail: Well, hey, I thought his speech about Jan. 6 was pretty powerful, don’t you agree?

Bret: Up to a point, yes. It was eloquent. And I had no disagreement with the substance.

I have a couple of worries, though. If Biden meant to commemorate an important anniversary, fine and good. But if he means for congressional Democrats to make “Remember Jan. 6” the organizing principle of their election campaigns, it’s political malpractice. It politicizes the event in a way that will diminish its significance and turn off wavering voters who feel they’re being talked down to. And it’s a distraction from the job Democrats should be doing, which is convincing the public that they’ve got their interests and concerns in mind. Elections are always about “What have you done for me lately?” Democrats aren’t going to win on the promise of safeguarding abstract principles, important as that may be.

Gail: I think you’re worried that the post-Jan. 6 ethos will include leftie opposition to the profitability obsession of big business. Like refusing to expand Medicaid, letting Big Pharma run amok on prescription drug prices and keeping a lid on Medicare.

Bret: I just think Democrats need to be careful not to mix milk and meat, so to speak. The smart play is to let the Jan. 6 committee do its work and let the public draw its conclusions. In the meantime, fix the supply-chain bottlenecks. Pick a quarrel with any teachers’ union that tries to keep schools closed. Propose an immigration bill that funds border security in exchange for citizenship for Dreamers. Break Build Back Better into bite-size components and get its most popular parts passed with votes from Joe Manchin, Kyrsten Sinema and even a Republican or two, like Lisa Murkowski or Susan Collins.

To keep Trump and his epigones away from high office, it isn’t enough to have the moral high ground. It’s like something Adlai Stevenson supposedly said once when a voter told him that every thinking person was on his side. “I’m afraid that won’t do,” he replied. “I need a majority.” Democracy needs a majority.

Gail: Hey, my final mission today is clear. I want us to stop here so we can all remember the time we concluded with Adlai Stevenson.

Till next week, Bret.