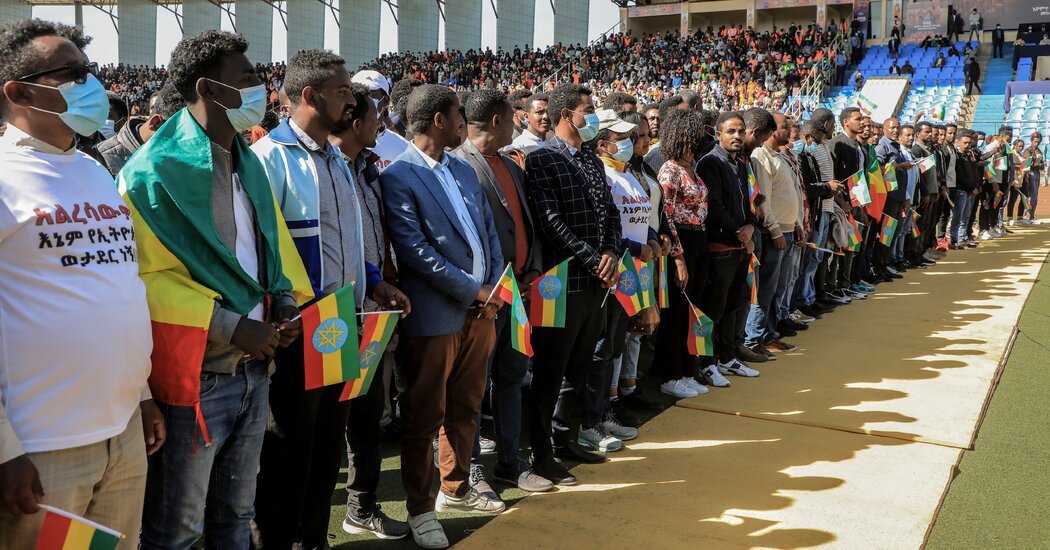 Government forces were going to door to door in the Ethiopian capital, rounding up ethnic Tigrayans, members of the same ethnic group as the rebels closing in.

A wave of fear spread across the Ethiopian capital, Addis Ababa, on Thursday as the authorities accelerated their campaign against members of a once-powerful ethnic group accused of sympathizing with rebels now pressing toward the city.

The sweeping measures targeting Tigrayans, from the same ethnic group as fighters who have been locked in civil war with Ethiopian government forces for the past year, raised concerns that the stage has been set for bursts of ethnically motivated violence.

“The situation is very intense and really frightening,” Hailu, an ethnic Tigrayan detained earlier this year, during a previous wave of arrests, said by phone. He did not give his full name to avoid being targeted.

The United States envoy to the Horn of Africa, Jeffrey Feltman, flew into Addis Ababa as the leader of an international scramble to try to stop the violence and bring Ethiopia’s warring parties to the table. There were few signs it might succeed.

Ethiopia’s embattled prime minister, Abiy Ahmed, announced a state of emergency on Wednesday that granted him draconian powers. And he spoke in such inflammatory language that Facebook deleted one of his posts on Thursday. Hours later, the Ethiopian government issued a new post with similarly stark references, also on Facebook.

“A rat that strays far from its hole is nearer to its death,” said the statement, referring to Tigrayan leaders and their supporters.

Mr. Abiy, who won the Nobel Peace Prize in 2019, was once seen as a bright and promising young leader. Now he finds his very future in doubt.

The American envoy, Mr. Feltman, was backed by regional African leaders who, although previously reluctant to get involved in the Ethiopian conflict, are now openly alarmed at the prospect of an all-out collapse in Africa’s second-most-populous nation.

“The fighting must stop!” President Uhuru Kenyatta of Kenya said in a statement, reflecting fears in his country that a widening conflict in Ethiopia could mean a flood of refugees streaming across its borders.

Instead, the fighting was spreading. A leader with the Tigray People’s Liberation Front said its fighters had reached a town about 120 miles northeast of Addis Ababa, where they were locked in battle with Ethiopian forces.

The Tigrayan official, who was not authorized to speak publicly, said the group hoped to sign an agreement with eight other opposition groups on Friday to ensure a “safe transition” in the country if Mr. Abiy was ousted.

For the moment, it has been security officials leading the moves against Tigrayans. Witnesses said security officers had ramped up activities in several Tigrayan-majority neighborhoods in Addis Ababa like Lebu, Semmit and Bole Bulbula.

Tigrayans said they were being targeted on the basis of their identity cards or their language, both of which could identify their ethnic background.

At around 8 a.m. in Shira Meda, a neighborhood in the north of the capital, two police officers stood guard outside a house while other officers searched inside. After an hour, a reporter for The New York Times saw the police emerge with two teenage boys, followed by their visibly distraught mother.

“It’s a Tigrayan house,” said a woman standing in a crowd of onlookers gathered across the street. Other residents confirmed that the family were ethnic Tigrayans and said they had no known ties to Tigrayan politics.

Hours later, in the same neighborhood, women gathered at the gate of a local youth center, bringing food and water to male relatives who had been detained in recent days and were being held inside.

One woman said her husband, a trader who sells traditional cloth, had been arrested at his store two days earlier. The authorities seemed to be pursuing “every Tigrayan, especially the men,” she said, declining to give her name to avoid being arrested herself.

Security was tight outside the city’s Bole International Airport, where police officers and soldiers closely inspected vehicles and travelers entering and leaving the airport, which is the headquarters of Ethiopian Airlines and one of Africa’s busiest aviation hubs.

It is not just Tigrayans who are being targeted. The Tigrayan fighters have linked up in recent days with the Oromo Liberation Army, a group fighting for greater rights for the ethnic Oromos who make up about 35 percent of Ethiopia’s 110 million people. Tigrayans make up about 6 percent.

The O.L.A. has seized control of several towns on a major highway leading to the capital, and holds patches of the surrounding countryside, Western officials said. The government has declared the group a terrorist entity and jailed many suspected supporters. The O.L.A. claimed that 400 Ethiopian soldiers in the city had defected to their side. The claim could not be independently verified.

For everyone else, life in Addis Ababa has a sense of attenuated normality.

In Lege Tafo, on the northern edge of the capital, soldiers manned newly erected checkpoints and searched even ambulances.

At a ceremony in another part of the city, over 350 government officials — men and women, some middle-aged, and many in suit and tie — attended a ceremony where they volunteered to join the fight against the approaching Tigrayans.

Some residents stocked up on food in supermarkets, saying they no longer believed the upbeat accounts of the fighting propagated by pro-government media outlets. Relatives in towns recently captured by the Tigrayans painted a much grimmer picture, they said.

“They assured us that everything was under control, and we believed them,” said a man in his 70s, speaking on the condition of anonymity.

The man said that he had survived Ethiopia’s last major internal conflict, in 1991, when Tigrayan rebels stormed Addis Ababa after ousting a brutal Marxist regime.

“We thought this time would be different,” he said. “I can’t believe I’m living through it again.”

Tigrayans have been suffering discrimination since the war started a year ago, with many disappearing into detention, dismissed from their jobs or forced into exile.

Mr. Abiy’s government insisted it was only acting against supporters of the Tigray People’s Liberation Front, a party that ruled Ethiopia with an iron fist for nearly three decades until Mr. Abiy came to power in 2018.

But the political quickly became personal as Mr. Abiy resorted to increasingly harsh language against Tigrayan leaders, calling them “cancer” and “weeds,” stoking wide fears that he was setting the stage for ethnically motivated violence against all Tigrayans.

Such fears prompted Facebook to move against Mr. Abiy on Thursday, over a post that urged Ethiopians to take up arms and “bury” the approaching rebel forces. Facebooks’s parent company, Meta, said in statement it had removed the post for “violating our policies against inciting and supporting violence.”