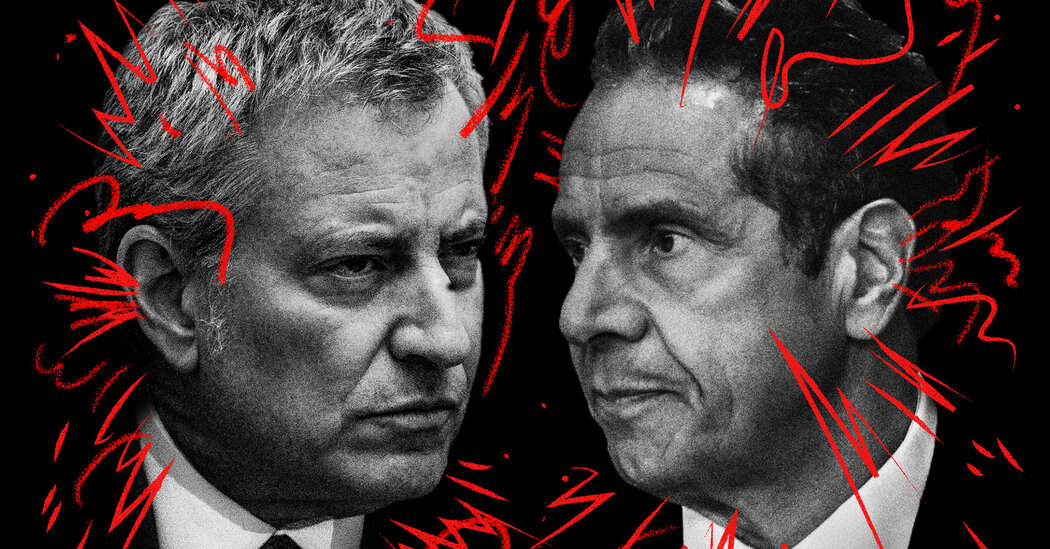 Gov. Andrew Cuomo and Mayor Bill de Blasio have before them some of the most difficult challenges any holder of their respective offices has ever faced. Both men are often forced to choose between the least worst of many bad options. So, you’d think this great crisis would be an opportunity for the mayor and the governor to set aside their long-running feud and work together. The prognosis isn’t great.

Even as New Yorkers face their most wrenching, and consequential, decision — whether to send their children into schools during a pandemic — Mr. Cuomo and Mr. de Blasio quibble and often put the personal over the professional to a dispiriting degree.

On Friday, the city submitted a 32-page reopening plan in which most children would go to school two or three days a week and continue online instruction on the other days. The plan, in some ways, established even more careful measures of safety than the governor had suggested, calling for schools to be shut if more than 3 percent of coronavirus tests in the city proved positive. The governor had suggested that 5 percent be the standard.

Rather than collaborating with city officials to ensure that the plan could have the confidence of New York’s parents and school employees, the governor’s initial public response was to slap it down.

“Just because a school district says ‘we’re open’ does not mean students are going to go,” Mr. Cuomo said on Sunday.

“We’ll accomplish nothing if we open the schools, but a significant number of parents decide to keep their children home,” he added.

One of Mr. Cuomo’s advisers had already called the proposal “an outline” rather than a plan and noted that a school reopening proposal in Yonkers, a much smaller city, was roughly 50 pages longer.

On Monday, the mayor said he was “past the point of irritation” with the governor. He’s not alone.

Mr. Cuomo is right that parents’ trust is necessary. New York City’s teachers’ union already has expressed skepticism about the reopening plan. The city’s rollout of online instruction left little reason for confidence in its plan to resume in-class instruction, nor does the resignation of the city’s health commissioner on Tuesday. And the governor’s warning also applied to other districts in the state.

Still, this political Punch and Judy show has grown tiresome. It began shortly after the mayor’s first inauguration, in 2014, when the governor balked at Mr. de Blasio’s signature initiative, providing prekindergarten to all of the city’s families. Ultimately the governor made universal pre-K a statewide program, to the benefit of all, but their rivalry had begun.

It continued with bickering over responsibility for the collapse of the subway system — remember when that was an existential urban crisis?

The feuding continued over who should take responsibility for the deterioration of the city’s public housing and who was to blame for Amazon’s decision to abandon plans for a major development in Queens.

It continued as the coronavirus pandemic loomed. Before the city shut down schools, restaurants and bars in mid-March, the mayor and the governor squabbled over who had the authority to make such decisions.

Shutting schools as the pandemic surged was unavoidable. The failure of the online alternative makes reopening them urgent. Doing so safely will be a huge challenge, though, and many questions remain. How great a threat is the coronavirus to children, and how easily do they transmit it? How can schools be made safe to staff members and the communities of adults that surround them? How can staff members be effectively tested for infection? Schools that have reopened elsewhere in the country already have seen outbreaks.

New York City and New York State made their share of early missteps in fighting the pandemic and are trying to avoid making more. Yet a corner has been turned, and the threat is being contained.

The mutual loathing between mayor and governor impedes that success. Mr. Cuomo and Mr. de Blasio can’t let it get in the way of educating children and keeping their constituents healthy.