The New York governor, Andrew M. Cuomo, is now the subject of four separate investigations into his behavior in office.

ALBANY, N.Y. — The New York State attorney general has opened an investigation into Gov. Andrew M. Cuomo’s use of state resources as he wrote and promoted his recent pandemic memoir, the latest inquiry to engulf the embattled three-term Democrat.

The investigation followed disclosures that junior staff members and senior aides worked on Mr. Cuomo’s book, “American Crisis: Leadership Lessons from the Covid-19 Pandemic,” including editing early drafts, sitting in on pitch meetings, and menial tasks like printing and delivering manuscript pages to the governor’s mansion.

Mr. Cuomo has insisted that any work done by government employees on the book — which garnered a seven-figure advance — was voluntary, allowing that some minor work may have been “incidental.”

The misuse of public resources has led to the downfall of numerous political figures, including a former state comptroller, Alan G. Hevesi, who resigned and pleaded guilty to a felony in 2006 after he used a state driver to run errands for his wife.

The new line of scrutiny seemed to exacerbate the widening rift among New York’s leading Democrats, as Mr. Cuomo’s office pushed back forcefully on Monday, describing the inquiry as a politically motivated attack — by members of the governor’s own party.

The governor’s office suggested that Ms. James and Mr. DiNapoli, both Democrats, had acted to sabotage his political future in favor of their own.

“We have officially jumped the shark — the idea there was criminality involved here is patently absurd on its face and is just the furthering of a political pile-on,” Richard Azzopardi, a senior adviser to Mr. Cuomo, said.

“This is Albany politics at its worst,” he continued. “Both the comptroller and the attorney general have spoken to people about running for governor, and it is unethical to wield criminal referral authority to further political self-interest‎.” 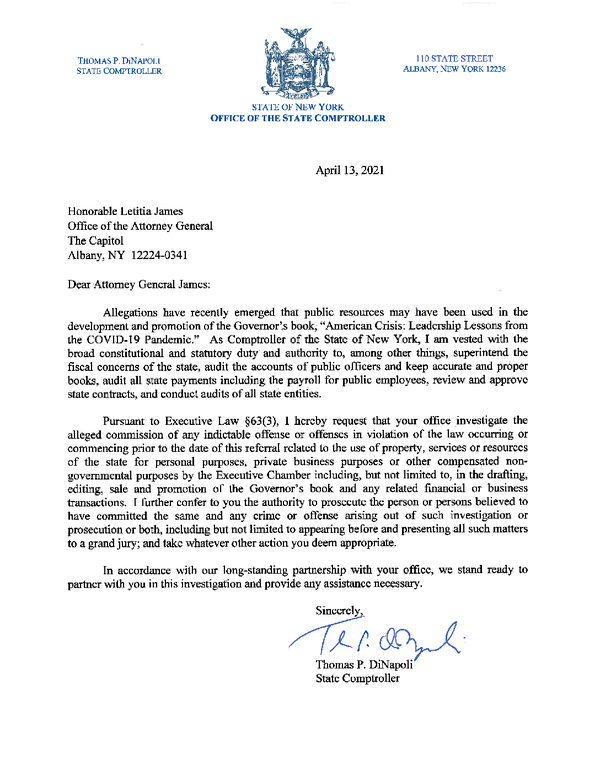 Letter from the state comptroller’s office to Letitia James, the attorney general

The letter authorized Ms. James to begin a possible criminal investigation into Gov. Andrew M. Cuomo’s use of state resources.

The investigation deepens the legal and political woes confronting Mr. Cuomo, who has seen his once-soaring career hobbled as he faces separate scandals involving his personal behavior and professional conduct, including a federal investigation into his handling of the state’s nursing homes during the pandemic.

That federal inquiry is one of four now facing Mr. Cuomo, including another overseen by Ms. James into multiple allegations of sexual harassment against the governor.

The State Assembly has opened a separate inquiry into those allegations, as well as the administration’s withholding of a full account of the death toll among nursing home residents. The chair of the Assembly’s Judiciary Committee, Charles D. Lavine, has said that investigators hired by his committee — the private firm of Davis Polk — would also examine the book deal and use of state resources.

The state’s Public Officers Law, which governs ethics for elected officials and state employees, prohibits using “property, services or other resources of the state for private business or other compensated nongovernmental purposes.”

The work on the book done by state employees was disclosed in The New York Times in late March and subsequent reporting in other publications.

Ms. James received the referral letter from Mr. DiNapoli on April 13, suggesting that the inquiry would center on “any indictable offense or offenses” involving, but not limited to, “the drafting, editing, sale and promotion of the governor’s book and any related financial or business transactions.”

The formal referral — which satisfies a technical prerequisite for the attorney general to begin a potential criminal inquiry — gave Ms. James broad authority to prosecute “any crime or offense arising out of such investigation.”

A spokeswoman for Ms. James confirmed on Monday that the office had received the referral, but declined additional comment on what she called “an ongoing investigation.”

“American Crisis,” which was released by Crown Publishing Group in mid-October, just as a second wave of the coronavirus began to swell in New York, has seen its sales stall during the governor’s political travails this year. Mr. Cuomo, 63, has declined to say how much he was paid for the manuscript, but people with knowledge of the book’s bidding process said that at least one offer had topped $4 million.

Mr. Cuomo, whose previous memoir sold poorly when it was published in 2014, began writing “American Crisis” as early as mid-June, when the state’s death toll was already in the tens of thousands.

The governor’s work and pitching of the book also corresponded with a period in which his most senior aides were reshaping a report about nursing home deaths, omitting the full death toll in a way that might have insulated the governor from criticism on that issue.

The Cuomo administration has defended the editing of the July 6 report, contending that it was necessary to ensure accurate data, and not an attempt to hide the full death toll of nursing home residents, more than 15,000 of whom have died since the beginning of the pandemic.

New York remains one of the hardest-hit states in the nation, with more than 51,000 Covid-related deaths reported so far.

Mr. Cuomo, once hailed as a steady presence during a series of daily news conferences about the pandemic, has become increasingly isolated as the overlapping controversies have sandbagged his administration.

A poll from Siena College on Monday found that the number of voters with a favorable view of the governor had dropped to 40 percent, a 16-point decline from February and the lowest mark of his decade-long tenure. But 51 percent also said the governor should not “immediately resign,” consistent with prior polls, with 37 percent saying he should.

There were also indications that Mr. Cuomo’s prospects for a fourth term were in jeopardy. Just 33 percent of those polled said they would vote to re-elect him in 2022; 57 said they would “prefer someone else.”

Most of the state’s congressional delegation, and many of his fellow Democrats in Albany, including Mr. DiNapoli, have called on Mr. Cuomo to resign. He has steadfastly resisted, pleading for time until Ms. James’s investigation into the sexual harassment allegations is complete.

Indeed, his intraparty attack on Ms. James and Mr. DiNapoli leaves little doubt that Mr. Cuomo will continue to fight any efforts to force him from office. The State Senate leader, Andrea Stewart-Cousins, has called for his resignation, but Carl E. Heastie, the Bronx assemblyman who leads the State Assembly, has stopped short of that demand. Both are Democrats.

Asked about the book at an online news conference on Monday, the governor reiterated that some members of his staff had volunteered to work on the book, and that some were also asked to review passages that mentioned them.

Mr. Cuomo also seemed determined to concentrate on his job, despite the distractions of various investigations.