ALBANY, N.Y. — On Sunday afternoon, faced with a new wave of infections in his virus-battered city, Mayor Bill de Blasio made a sobering decision to ask the state to roll back openings of businesses in virus hot spots in Brooklyn and Queens, pending approval from Gov. Andrew M. Cuomo.

But on Monday, Mr. Cuomo, Mr. de Blasio’s longtime foil, refused to give it.

Mr. Cuomo said he would not yet allow the city to close the nonessential businesses, suggesting that the ZIP codes that were being used to identify hot spots were too imprecise to guide shutdowns, and that he was considering other geographic boundaries. The more pressing problem, he said, lay in schools and houses of worship, including many that cater to Orthodox Jews, rather than businesses that “are not large spreaders.”

The conflicting messages from the state’s two most prominent politicians created confusion for residents, business owners and parents in the affected areas and drew scrutiny to the conflict between the city and state over how to tackle early signs of a second wave of the virus in its one-time epicenter.

The governor’s announcement also seemed to be yet another manifestation of the tense and often dissonant relationship between City Hall and Albany, which has an outsize role in many city decisions.

Mr. Cuomo, a third-term Democrat, has frequently second-guessed or overruled the mayor, who is also a Democrat, during their overlapping tenures. Those clashes were cast in sharp relief during the early days of the pandemic, with the city and state at odds over the timing of shutting down the city businesses and its schools, among other issues.

On Monday, that disconnect continued, as Mr. Cuomo accelerated the mayor’s plan to close schools in newly hard-hit areas, moving the closure date up a day to Tuesday, a decision the governor defended by saying that testing was insufficient to protect children in those schools. “I’ll never let a New Yorker send a child to a school that I wouldn’t send my child to,” he said.

Mr. Cuomo did not rule out closing nonessential businesses or public spaces in the near future, and top aides suggested a state plan could be unveiled as soon as Tuesday. Mr. Cuomo said his administration was reviewing how best to do it without relying on geographic delineations from ZIP codes, which he said were arbitrary and might not accurately capture the areas where new cases are going up.

“A ZIP code is not the best definition of the applicable zone,” he said. “If you have to circumscribe an area, make sure you have the right boundaries.”

Cuomo administration officials later suggested that the boundaries for business closures could even exceed the ZIP codes where the increases are now occurring.

The governor also announced that the state would take over supervision of enforcement of mask and social-distancing rules in the hot spot clusters. “Local government will need to provide us with personnel,” he said.

But the mixed messages continued, even after the governor’s decision, which he said was made in consultation with the mayor, as well as the head of the city’s teachers’ union and several other city officials. Indeed, shortly after the governor spoke, Mr. de Blasio reiterated that he believed the city would still plan on closing nonessential businesses on Wednesday.

“Until there is a different plan, we are preparing to implement this plan,” the mayor said, while acknowledging that the city would ultimately back off from executing the shutdown if the state didn’t authorize it. 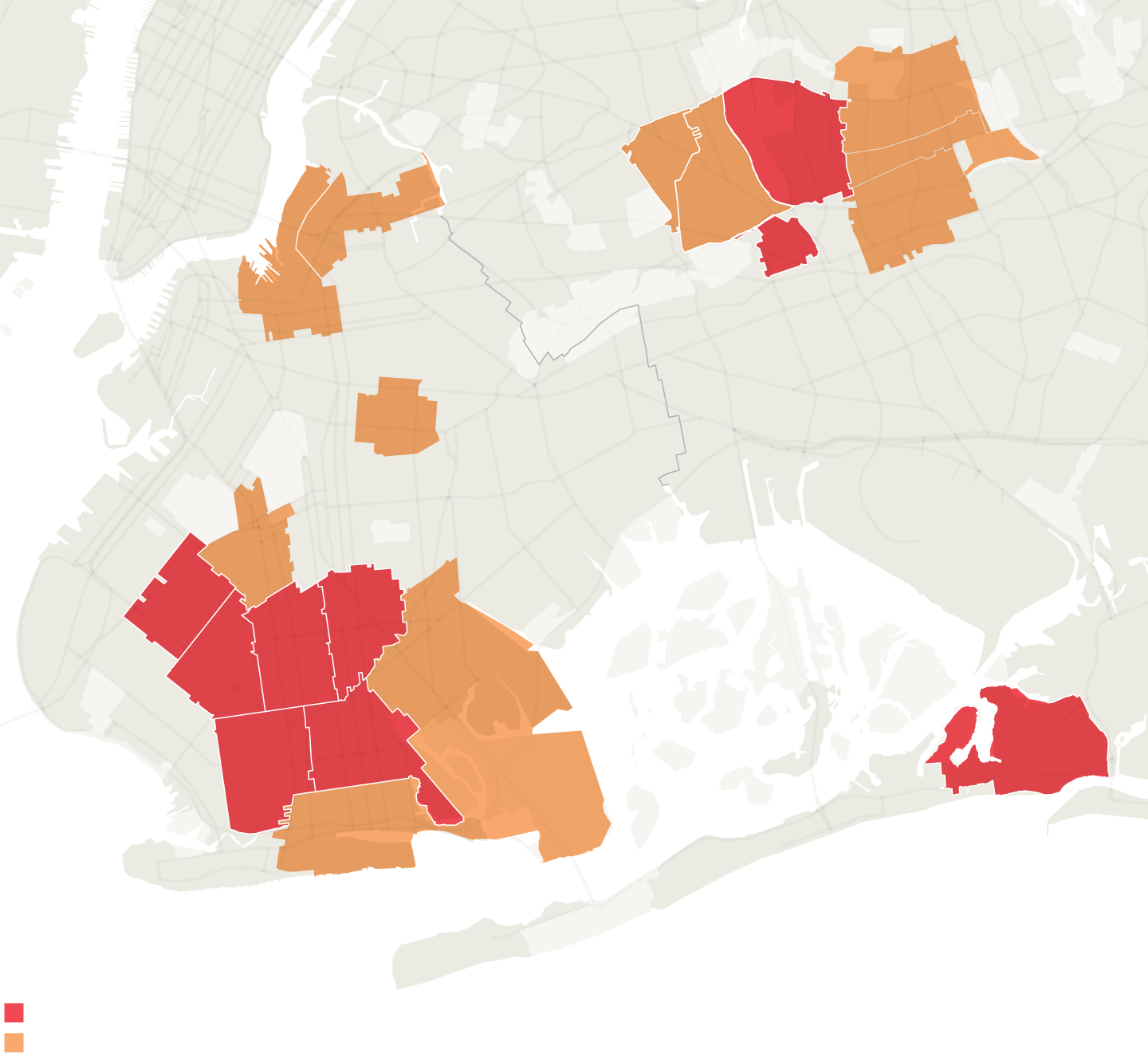 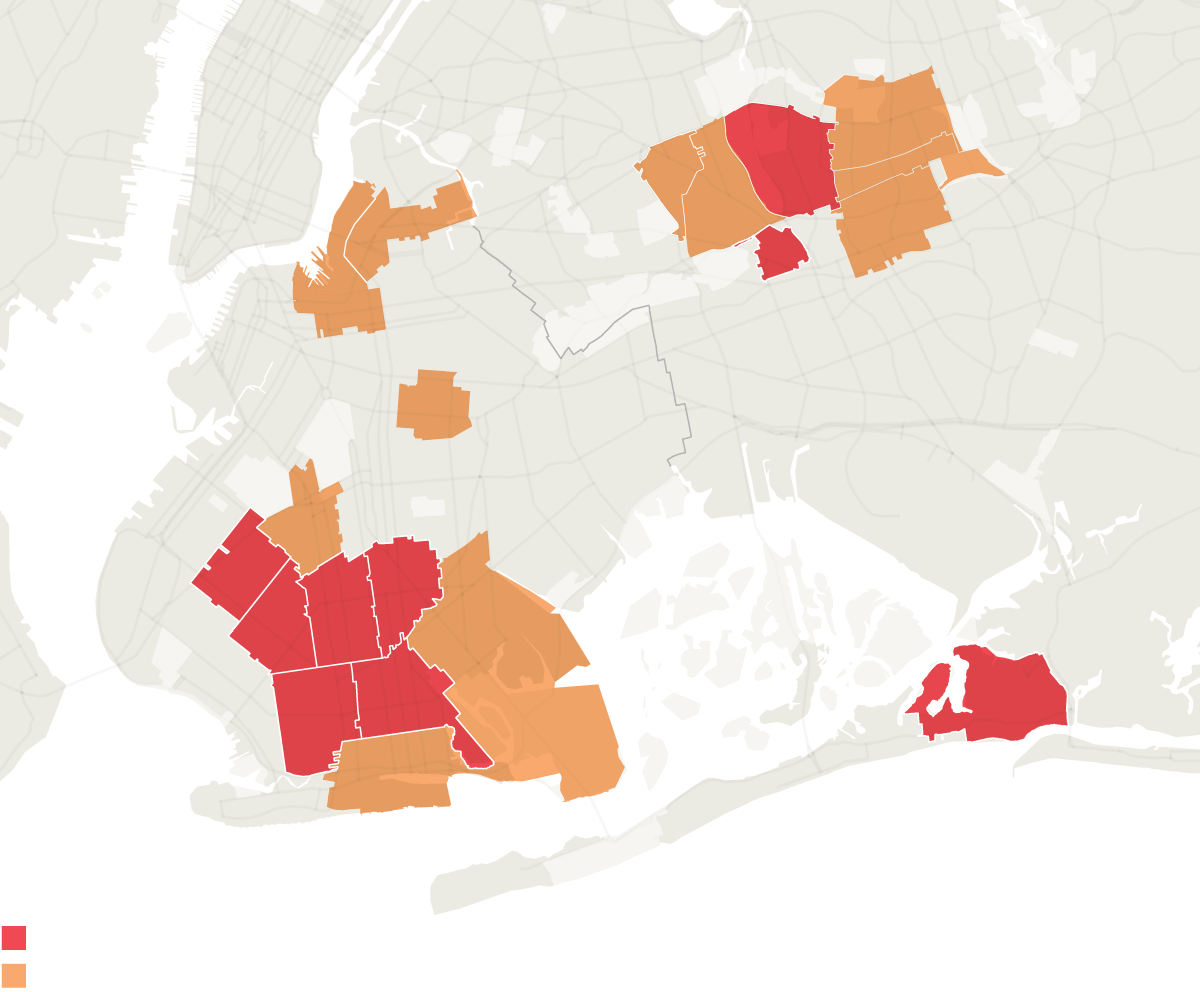 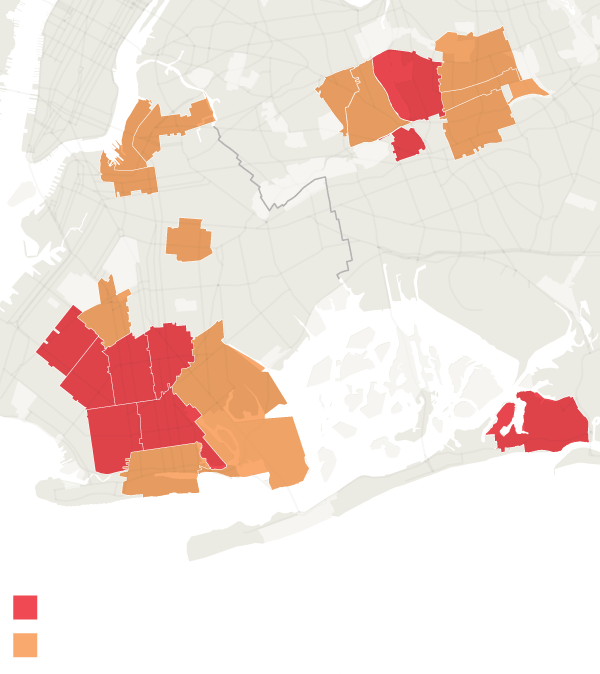 The governor also noted that the city’s proposal “does not close religious institutions,” something he said he would consider if religious leaders did not obey rules prohibiting mass gatherings.

At the same time, however, Mr. Cuomo said he would not order schools closed in areas in Orange and Rockland Counties, suburban areas north of the city that have both had serious outbreaks in recent weeks, with some areas seeing positive rates of 10 percent or more — higher than any city hot spot.

State statistics from Monday, in fact, show that three ZIP codes in Orange and Rockland have the highest three-day averages in New York. But Mr. Cuomo insisted that those areas do not “have the same level of problem” and suggested there might be disparities in the infection rates in those counties. He added that his team would “drill down on the data.”

On Monday, however, Mr. de Blasio described those clusters as a regional problem, saying there could be “a connective tissue” between the infections in New York City and Orange and Rockland Counties.

“Everything interconnects,” he said. “It should be dealt with as a whole.”

The governor said he would meet with religious leaders in the hot spots on Tuesday.

“I’m going to say to them, ‘Unless you agree to follow the rules, we will close religious institutions,’” the governor said.

The outbreaks in New York City and its northern suburbs have affected several large communities of Orthodox Jews, a politically potent force in city and, to a lesser degree, state politics, because of their tendency to vote in a bloc. Many in those communities have been stubbornly resistant to outside mandates to wear masks and avoid congregating in large groups, particularly during Jewish holidays.

On Monday, the conflicting statements from the governor and the mayor created more confusion and anguish.

“It has been chaos from all the way to the beginning in March,” said Motti Seligson, a spokesman for the Chabad-Lubavitch Hasidic movement, which is based in Brooklyn and is one of the largest Hasidic groups in the world. “There have been a lot of mixed messages and a lack of real engagement on a deep level with these communities.”

“There is an immense amount at stake here,” Mr. Seligson added. “Closing down causes a lot of hardship. It impacts people’s livelihoods, the education and development of children, mental health. It is never a good thing, even if it may be the right thing to do.”

The mayor’s plan, announced on Sunday, called for the closure of all schools — public and private — in nine ZIP codes, the shutdown of all nonessential businesses and the cessation of indoor and outdoor dining in restaurants. In an additional 11 areas, looser restrictions would be imposed: Gyms and swimming pools would be closed and indoor dining banned. On Monday, Mr. de Blasio added a 12th ZIP code in Forest Hills, Queens, to that second list.

Asked if he felt that he and Mr. de Blasio should have coordinated their announcements, Mr. Cuomo said no, noting that they occupy different levels of government. He also suggested that he had been surprised by the mayor’s announcement on Sunday, which came shortly after the governor had given a daily update on the coronavirus.

Likewise, Mr. de Blasio suggested that his decision to outline his plans without seeking the governor’s approval might have been calculated to prompt a speedy response.

“The best way to ensure there is action is to put the proposal on the table publicly,” the mayor said.