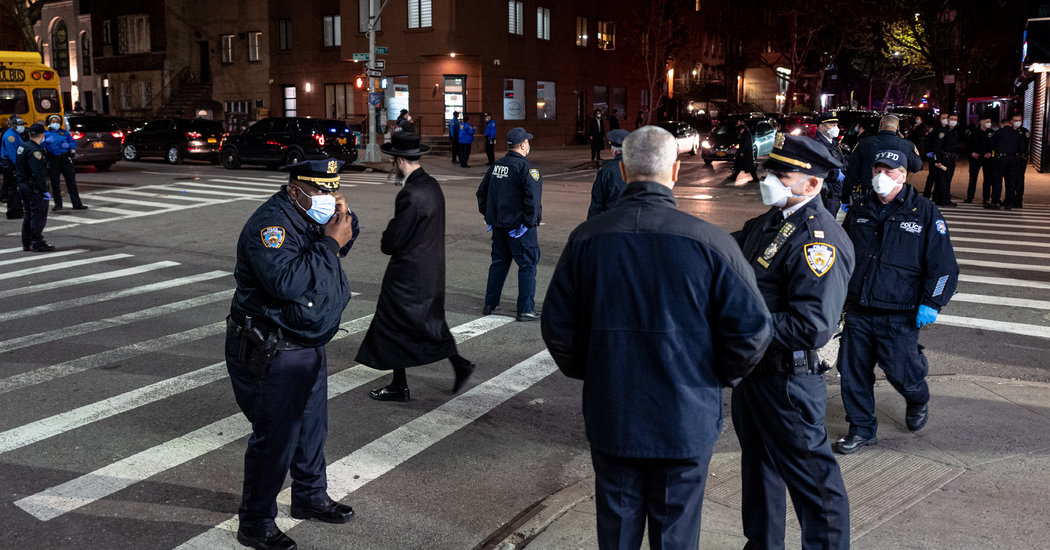 Mayor Bill de Blasio lashed out at Hasidic residents of the Williamsburg section in Brooklyn late Tuesday night after personally overseeing the dispersal of a crowd of hundreds of mourners who had gathered for the funeral of a rabbi who died of the coronavirus.

In a series of tweets, Mr. de Blasio denounced the gathering, which the police broke up, and warned “the Jewish community, and all communities” that any violation of the social-distancing guidelines in place to stop the spread of the virus could lead to a summons or an arrest.

“Something absolutely unacceptable happened in Williamsburg tonite: a large funeral gathering in the middle of this pandemic,” the mayor said in one post. “When I heard, I went there myself to ensure the crowd was dispersed. And what I saw WILL NOT be tolerated so long as we are fighting the Coronavirus.”

The authorities have dispersed several well-attended religious gatherings since restrictions on such events were enacted in the face of the outbreak. The events that were broken up included weddings and funerals in New York neighborhoods with large Jewish populations.

But the episode on Tuesday, which, according to Yeshiva World, involved the funeral of Rabbi Chaim Mertz, appeared to be the first time the mayor had directly participated in a dispersal.

“My message to the Jewish community, and all communities, is this simple: the time for warnings has passed,” Mr. de Blasio said in another post. “I have instructed the NYPD to proceed immediately to summons or even arrest those who gather in large groups. This is about stopping this disease and saving lives. Period.”

Hasidic groups and leaders reacted to the mayor’s warning with outrage.

Chaim Deutsch, a City Council member who represents a section of Brooklyn with a large Orthodox Jewish population, expressed anger and disbelief on Twitter, writing, “This has to be a joke.”

“Did the Mayor of NYC really just single out one specific ethnic community (a community that has been the target of increasing hate crimes in HIS city) as being noncompliant??” Mr. Deutsch wrote. “Has he been to a park lately? (What am I saying – of course he has!)”

“But singling out one community is ridiculous,” he added in another post. “Every neighborhood has people who are being non-compliant. To speak to an entire ethnic group as though we are all flagrantly violating precautions is offensive, it’s stereotyping, and it’s inviting antisemitism. I’m truly stunned.”

Other people noted the size of the crowds that had gathered earlier in the day across the region to watch a military flyover by pilots from the Navy’s Blue Angels and the Air Force’s Thunderbirds honoring essential workers.

Photos posted on social media showed people gathering on city streets and in parks to watch the flyover; many of the assembled appeared to be standing close together and not wearing masks.

The Orthodox Jewish Public Affairs Council said in a tweet that “people failed to social distance at a funeral the same day that thousands of New Yorkers failed to distance for 45 minutes to watch a flyover.”

The group criticized the mayor for making a statement about “the Jewish community” based on the actions of a few hundred people in one neighborhood. It said the mayor had not made similar remarks about other groups, adding that hundreds of thousands of Orthodox Jews live in the New York area.

“It is unacceptable that videos of some people in this community failing to social distance is news and is news in a generalized way (“Orthodox/Hasidic Jews”),” the group said in a tweet.

“The mayor has been one of the staunchest supporters of the Jewish community since his earliest days in public service,” Ms. Goldstein said in a statement. “There were thousands of people gathered today, putting their lives and the lives of others at risk. It is his responsibility to all New Yorkers to speak up.”

The pandemic has hit Hasidic residents of New York with devastating force, sickening and killing people at a rate that local leaders and public health data suggest may exceed that of other ethnic and religious groups.

Hundreds of Hasidic people have died of the virus, community leaders said, including influential religious figures like the Rabbi Yaakov Perlow, who led the Novominsker Hasidic dynasty and Agudath Israel of America, an umbrella ultra-Orthodox organization.

Most of the Orthodox Jewish leaders who have died amid the pandemic have not had big crowds at their funerals, but some have been mourned at large public gatherings like the one on Tuesday in Williamsburg.

The persistence of such events has drawn wide news media coverage. It has also generated deep unease among Hasidic groups, who feel they are being singled out for opprobrium and worry about anti-Semitism. And in any case, they argue, public health violations in their neighborhoods endanger them most of all.

A police spokeswoman said that officers were at the funeral but had not made any arrests. Videos posted on social media showed that members of the neighborhood Hasidic safety patrol, known as shomrim, were there as well.

Gatherings of any size have been banned in New York State for more than a month as part of the sweeping orders enacted by Gov. Andrew M. Cuomo to slow the spread of the coronavirus.

The Police Department has assigned hundreds of officers to enforce social-distancing rules, responding to calls of overcrowding at stores, parks, and other gathering spaces.