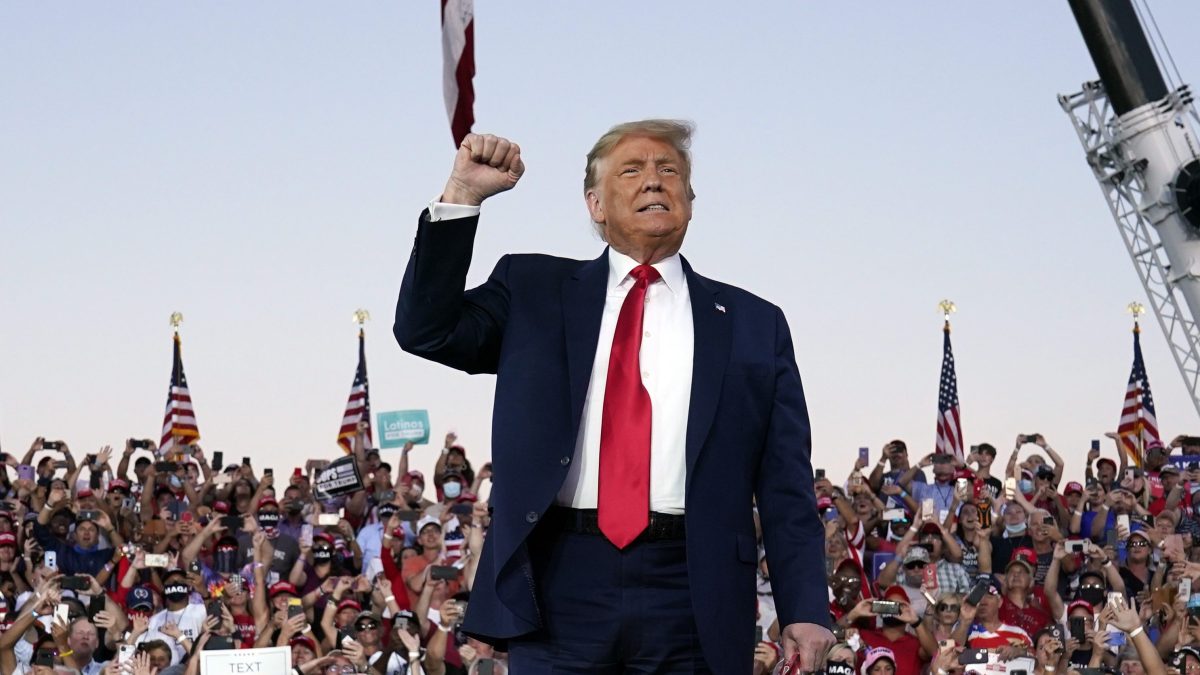 Defiant as ever about the coronavirus, President Donald Trump on Monday turned his first campaign rally since contracting COVID-19 into a full-throated defense of his handling of the pandemic that has killed 215,000 Americans, joking that he was healthy enough to plunge into the crowd and give voters “a big fat kiss.”

There was no social distancing and mask-wearing was spotty among the thousands who came to see Trump’s return to Florida. He held forth for an hour, trying to get his struggling campaign back on track with just weeks left before Election Day.

Though he was hospitalized battling the virus only a week ago, Trump’s message on COVID-19 was unaltered since his diagnosis: a dubious assessment that the pandemic was just about a thing of the past. Hundreds of people in the U.S. continue to die of the virus every day.

“Under my leadership, we’re delivering a safe vaccine and a rapid recovery like no one can even believe,” Trump insisted. “If you look at our upward path, no country in the world has recovered the way we have recovered.”

His voice was perhaps a touch scratchy but otherwise, Trump was, well, Trump.

Boisterous and bellicose, he thanked the audience for their well-wishes and declared he was no longer contagious as he embarked on a frenetic final stretch of the campaign.

Trump insisted that, after being given experimental medication and other VIP treatment, he felt great and was glad he no longer needs to be concerned about infection because he’s now “immune.”

Dr. Anthony Fauci, the nation’s top infectious-disease expert, said Monday on CNN that those who recover from COVID-19 are likely to be immune for a limited period of time, but there are cases emerging of people getting reinfected weeks or months later.

Despite Trump’s battle with a deadly disease, it was striking how little had changed. Threats to smooch audience members aside, the rally felt like so many others during the pitched general election battle against Democrat Joe Biden.

Trump returned to his many usual attack lines, slamming Democrats as “engaged and unhinged and out for vengeance,” and hyping “tremendous progress” on virus therapeutics. He promised the third-quarter economy would be “record-setting” and claimed that, if he wins in November, “normal life” will resume, while Biden would delay the vaccine and destroy the economy with a “draconian” lockdown.

And when he was done, with his new exit song, The Village People’s “YMCA,” blaring over the loudspeakers, the president did what has become his trademark dance, pumping his fists somewhat in time to the beat as the crowd roared. But he kept his distance from the audience.

With three weeks to go before the election, Trump is pushing to correct a stubborn deficit in national and battleground state polling as he continues to spread misinformation about a virus that he spent months downplaying.

That includes in Florida, which is seen as crucial to his reelection chances. Trump narrowly beat his 2016 rival, Democrat Hillary Clinton, in the state by just over 112,000 votes. Some recent polls have suggested a close race in the state, while others have put Democrat Joe Biden ahead.

Underscoring the importance of Florida, Trump will be back in the state Friday for another rally, this time in Ocala.

Trump’s Sanford rally was his first stop in a busy week that will include events in Pennsylvania, Iowa, North Carolina, Georgia and Wisconsin. The robust schedule highlights the urgency he is facing to recover from a series of self-inflicted setbacks that have rattled his base of support and triggered alarm among Republicans who fear the White House is on the verge of being lost to Biden.

And it comes amid still-unanswered questions about the impact so much travel so soon could have on the 74-year-old president’s health. The progression of COVID-19 is often unpredictable, and there can be long-term complications.

After Air Force One lifted off from Joint Base Andrews, the president’s doctor released an update on his health that said Trump had tested negative for the virus — and had done so on consecutive days. His doctor, Navy Cmdr. Scott Conley, said the tests, taking in conjunction with other data, including viral load, have led him to conclude that Trump was not contagious.

For days, the White House had sidestepped questions about whether Trump had tested negative. Conley over the weekend said that the president met Centers for Disease Control and Prevention criteria for safely discontinuing isolation and that by “currently recognized standards,” Trump was no longer considered a transmission risk.

There was no evidence of any new health precautions, although more passengers than usual on Air Force One, including U.S. Secret Service agents and White House chief of staff Mark Meadows, were seen wearing masks on board.

Trump’s decision to so quickly return to the campaign trail drew criticism from Biden and other Democrats.

“President Trump comes to Sanford today bringing nothing but reckless behavior, divisive rhetoric, and fear mongering,” Biden said in a statement. “But, equally dangerous is what he fails to bring: no plan to get this virus that has taken the lives of over 15,000 Floridians under control.”

Trump continued to mock Biden for his efforts to encourage social distancing at his campaign events, deriding as “crazy” the circles Biden’s campaign uses to delineate individual space.

“He’s got a lot of bad days coming,” Trump said at another point.