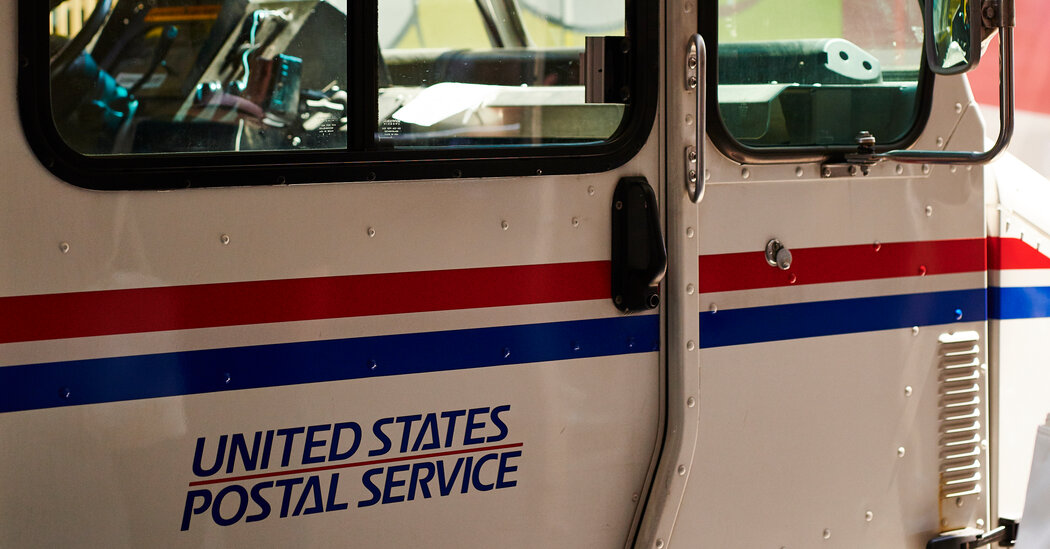 Last year, in the midst of a presidential election campaign and a pandemic, the U.S. Postal Service was politicized by President Donald Trump and his administration as had never been done before. Critics accused the postmaster general, Louis DeJoy, of making changes to mail delivery to increase Mr. Trump’s chances of re-election, a charge he vehemently denied.

This year, the Postal Service has returned to its traditional role of being the one thing in Washington that Democrats and Republicans can reliably agree on. It is heartening to see lawmakers from both parties lining up behind the Postal Service Reform Act of 2021 — legislation introduced in the Senate and House that would help bring the mail into the 21st century.

It’s no secret that the rise of email, e-commerce and electronic payments has created an existential crisis for the post office, which has knitted the nation together for more than 245 years. The volume of first-class mail has plummeted. From 2007 to 2020, it declined by 45 percent. Revenue from domestic mail fell 36 percent — to $38.7 billion from $60.6 billion — over the same period, curtailing the ability of the Postal Service to fund its own operations. A chorus of voices, including this editorial board’s, have called for scaling back service in various ways to respond to rising costs and falling demand. More radical critics have called for privatizing mail delivery altogether.

Privatization is a bad idea. The Postal Service is arguably the only government agency that exists in every American neighborhood — rural and urban, rich and poor. It has an enviable infrastructure that includes the largest fleet of trucks in the country and the largest number of brick-and-mortar storefronts. It remains among the most trusted and most popular government agencies. Many people depend on the post office to receive lifesaving medications and Social Security checks. Privatizing its functions would squander something valuable that we all share. Any downsizing must be done with great care.

Mr. DeJoy’s 10-year plan for the agency, announced in March, seeks to address the hemorrhaging of cash in part by raising rates and streamlining service, in some cases cutting back on hours and employees. On Friday the Postal Service announced that a first-class stamp would cost 58 cents, up from 55 cents, starting this summer

Some cutbacks and rate increases are necessary. But what the post office really needs is reimagining. An alliance of more than 80 national organizations, including the American Postal Workers Union, has put out a proposal to use the existing infrastructure in new ways — anchoring the expansion of broadband access in rural areas or checking in on elderly and disabled people for whom mail carriers are the only point of daily human contact. The alliance’s plan also includes expanding the provision of financial services, such as affordable check-cashing, which could be vital in underserved areas. A 2015 report by the Postal Service Office of Inspector General estimates that such services could provide meaningful assistance to 68 million Americans who either don’t have a bank account or rely on expensive payday lending programs to cash checks. The Postal Service is already the single largest provider of paper money orders nationwide, and it offered savings accounts to customers until the late 1960s. The inspector general’s report estimated that the expansion of such services would generate about $1 billion in new revenue annually.

The Postal Service Reform Act would not explicitly authorize this kind of expansion, but it would leave the door open for experimentation by including a provision to allow more cooperation with state and local governments to offer nonpostal products on their behalf.

The bill would also put the Postal Service on firmer financial footing by removing a 2006 congressional requirement that the agency set aside large amounts of cash to cover the cost of employee post-retirement health benefits 75 years into the future. It is unreasonable to force the Postal Service to prefund retiree benefits that far ahead, something no other entity — public or private — is expected to do. The bill would also require the Postal Service to enroll all of its employees in Medicare when eligible, significantly reducing the agency’s health care costs. Although mail carriers pay taxes into Medicare — and are the second-largest contributor to Medicare in the country — Medicare enrollment is voluntary for retirees.

Those changes, as requested by Mr. DeJoy, would help stop the financial bleeding at the agency, which has operated at a loss since 2006. It would save an estimated $45 billion over 10 years, freeing up money to make much-needed investments in modernization. A separate postal reform bill includes $8 billion to make a majority of postal trucks electric vehicles, which would be an enormous leap toward reducing emissions. That’s a plan that can be embraced by both environmental activists and corporations like Amazon, which ships packages through the Postal Service. As Amazon brings more deliveries in-house, the potential loss of revenue for the Postal Service poses a challenge that must be met with creativity and collaboration with other businesses that might fill the gap.

Far more needs to be done to bring the U.S. Postal Service into the digital age. But this is a step in the right direction. The post office has always been able to adapt to technological change — from the pony express to the advent of airmail. It will be able to adapt once again, if Congress allows it to invest in itself and innovate.