A new report, in perhaps the most thorough soul-searching done by either party this year, points to an urgent need for the party to present a positive economic agenda and rebut Republican misinformation.

In the next election, they cannot count on repeating that feat, a new report warns.

A review of the 2020 election, conducted by several prominent Democratic advocacy groups, has concluded that the party is at risk of losing ground with Black, Hispanic and Asian American voters unless it does a better job presenting an economic agenda and countering Republican efforts to spread misinformation and tie all Democratic candidates to the far left.

The 73-page report, obtained by The New York Times, was assembled at the behest of three major Democratic interest groups: Third Way, a centrist think tank, and the Collective PAC and the Latino Victory Fund, which promote Black and Hispanic candidates. It appears to be the most thorough act of self-criticism carried out by Democrats or Republicans after the last campaign.

The document is all the more striking because it is addressed to a victorious party: Despite their successes, Democrats had hoped to achieve more robust control of both chambers of Congress, rather than the ultra-precarious margins they enjoy. 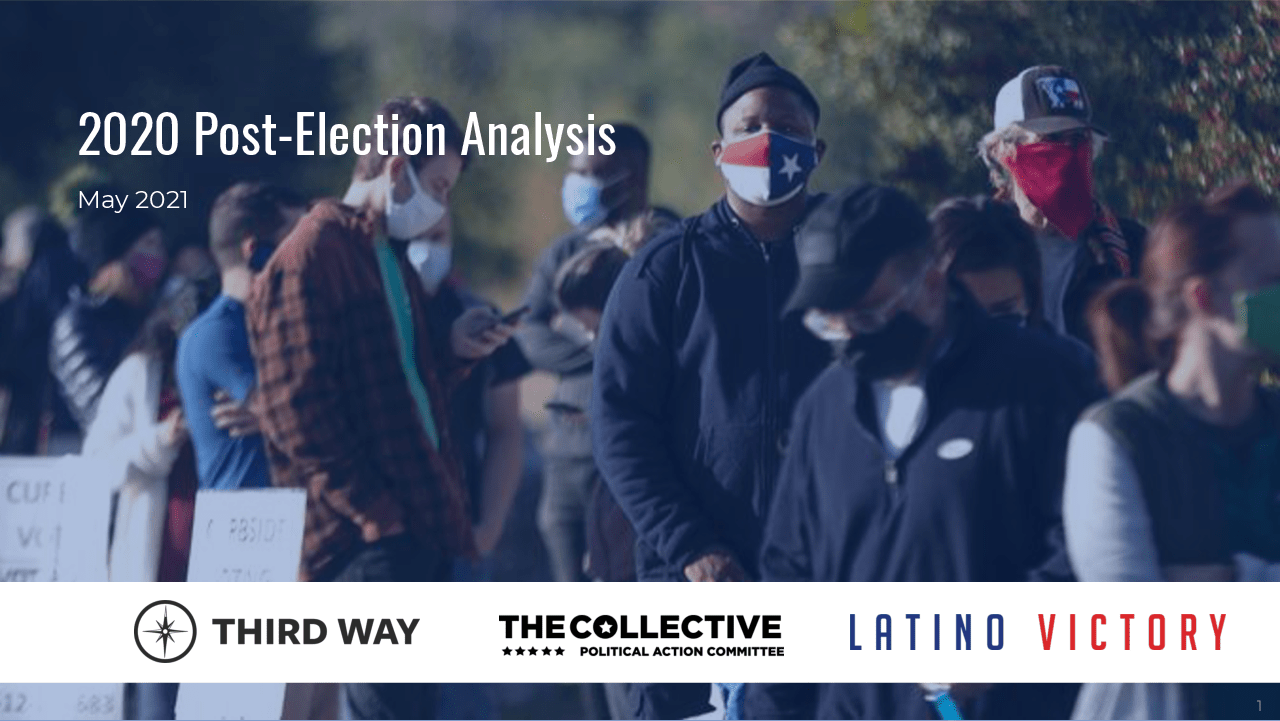 Three prominent Democratic groups, Third Way, the Collective PAC and the Latino Victory Fund, conducted a review of the 2020 election.

In part, the study found, Democrats fell short of their aspirations because many House and Senate candidates failed to match Joseph R. Biden Jr.’s support with voters of color who loathed Mr. Trump but distrusted the Democratic Party as a whole. Those constituencies included Hispanic voters in Florida and Texas, Vietnamese American and Filipino American voters in California, and Black voters in North Carolina.

Overall, the report warns, Democrats in 2020 lacked a core argument about the economy and recovering from the coronavirus pandemic — one that might have helped candidates repel Republican claims that they wanted to “keep the economy shut down,” or worse. The party “leaned too heavily on ‘anti-Trump’ rhetoric,” the report concludes.

“Win or lose, self-described progressive or moderate, Democrats consistently raised a lack of strong Democratic Party brand as a significant concern in 2020,” the report states. “In the absence of strong party branding, the opposition latched on to G.O.P. talking points, suggesting our candidates would ‘burn down your house and take away the police.’”

Former Representative Debbie Mucarsel-Powell, a Democrat who lost re-election in South Florida in November, said in an interview that she had spoken with the authors of the report and raised concerns about Democratic outreach to Hispanic voters and the party’s failure to rebut misinformation in Spanish-language media.

“Unfortunately, the Democratic Party has in some ways lost touch with our electorate,” Ms. Mucarsel-Powell said. “There is this assumption that of course people of color, or the working class, are going to vote for Democrats. We can never assume anything.”

The report, chiefly written by a pair of veteran Democratic operatives, Marlon Marshall and Lynda Tran, is among the most significant salvos yet in the Democratic Party’s internal debate about how it should approach the 2022 elections. It may stir skepticism from some quarters because of the involvement of Third Way, which much of the left regards with hostility.

A fourth group that initially backed the study, the campaign finance reform group End Citizens United, backed away this spring. Tiffany Muller, the head of the group, said it had to abandon its involvement to focus instead on passing the For the People Act, a sweeping good-government bill that is stuck in the Senate.

Mr. Marshall and Ms. Tran, as well as the groups sponsoring the review, have begun to share its conclusions with Democratic lawmakers and party officials in recent days, including Jaime Harrison, the chairman of the Democratic National Committee.

The study spanned nearly six months of research and data analysis that scrutinized about three dozen races for the House and the Senate, and involved interviews with 143 people, including lawmakers, candidates and pollsters, people involved in assembling the report said. Among the campaigns reviewed were the Senate elections in Arizona, Georgia and North Carolina, as well as House races in the suburbs of Minneapolis, Los Angeles, Atlanta and Dallas, and in rural New Mexico and Maine.

The study follows an internal review conducted by the Democratic Congressional Campaign Committee that was unveiled last month. Both projects found that Democratic candidates had been hobbled by flawed polling and pandemic-imposed limitations on campaigning.

In the D.C.C.C. report, the committee attributed setbacks at the congressional level to a surge in turnout by Trump supporters and an inadequate Democratic response to attacks calling them police-hating socialists.

Some lawmakers on the left have complained that criticism of left-wing messaging amounts to scapegoating activists for the party’s failures.

Yet the review by Third Way, the Collective PAC and the Latino Victory Fund goes further in diagnosing the party’s messaging as deficient in ways that may have cost Democrats more than a dozen seats in the House. Its report offers a blunt assessment that in 2020, Republicans succeeded in misleading voters about the Democratic Party’s agenda and that Democrats had erred by speaking to voters of color as though they are a monolithic, left-leaning group.

Representative Tony Cárdenas of California, who last year helmed the Congressional Hispanic Caucus’s political action committee, embraced that critique of Democratic messaging and said the party should discard the assumption “that voters of color are inherently more progressive.”

“That’s been a ridiculous idea and that’s never been true,” Mr. Cárdenas said, lamenting that Republicans had succeeded in “trying to confuse Latino voters with the socialism message, things of that nature, ‘defund the police.’”

Quentin James, the president of the Collective PAC, said it was clear that “some of the rhetoric we see from coastal Democrats” had been problematic. Mr. James pointed to the activist demand to “defund” the police as especially harmful, even with supporters of policing overhauls.

“We did a poll that showed Black voters, by and large, vastly support reforming the police and reallocating their budgets,” Mr. James said. “That terminology — ‘defund’ — was not popular in the Black community.”

Kara Eastman, a progressive Democrat who lost her bid for a House seat based in Omaha, said Republicans had succeeded in delivering a “barrage of messages” that tarred her and her party as being outside the mainstream. Ms. Eastman said she had told the authors of the 2020 review that she believed those labels were particularly damaging to women.

Matt Bennett, a Third Way strategist, said the party needed to be far better prepared to mount a defense in the midterm campaign.

“We have got to take very seriously these attacks on Democrats as radicals and stipulate that they land,” Mr. Bennett said. “A lot of this just didn’t land on Joe Biden.”

Democrats maintained a large advantage with voters of color in the 2020 elections, but the report identified telling areas of weakness. Mr. Biden and other Democrats lost ground with Latino voters relative to the party’s performance in 2016, “especially among working-class and non-college voters in these communities,” the report found.

The report found that a surge in Asian American turnout appeared to have secured Mr. Biden’s victory in Georgia but that Democratic House candidates ran behind Mr. Biden with Asian American voters in contested California and Texas races. In some important states, Democrats did not mobilize Black voters at the same rate that Republicans did conservative white voters.

“A substantial boost in turnout netted Democrats more raw votes from Black voters than in 2016, but the explosive growth among white voters in most races outpaced these gains,” the report warns.

There has been no comparable self-review on the Republican side after the party’s severe setbacks last year, mainly because G.O.P. leaders have no appetite for a debate about Mr. Trump’s impact.

The Republican Party faces serious political obstacles, arising from Mr. Trump’s unpopularity, the growing liberalism of young voters and the country’s growing diversity. Many of the party’s policies are unpopular, including cutting social-welfare and retirement-security programs and keeping taxes low for the wealthy and big corporations.

Yet the structure of the American electoral system has tilted national campaigns toward the G.O.P., because of congressional gerrymandering and the disproportionate representation of rural white voters in the Senate and the Electoral College.

Democratic hopes for the midterm elections have so far hinged on the prospect of a strong recovery from the coronavirus pandemic and on voters’ regarding Republicans as a party unsuited to governing.

Representative Mikie Sherrill of New Jersey, a moderate Democrat who was briefed on the findings of the report, called it proof that the party needed a strong central message about the economy in 2022.

“We need to continue to show the American people what we’ve done, and then talk incessantly across the country, in every town, about how Democrats are governing,” Ms. Sherrill said.

Largely unaddressed in the report is the immense deficit Democrats face among lower-income white voters. In its conclusion, however, Mr. Marshall and Ms. Tran write that Democrats need to deliver a message that includes working-class whites and matches the G.O.P.’s clear “collective gospel” about low taxes and military strength.