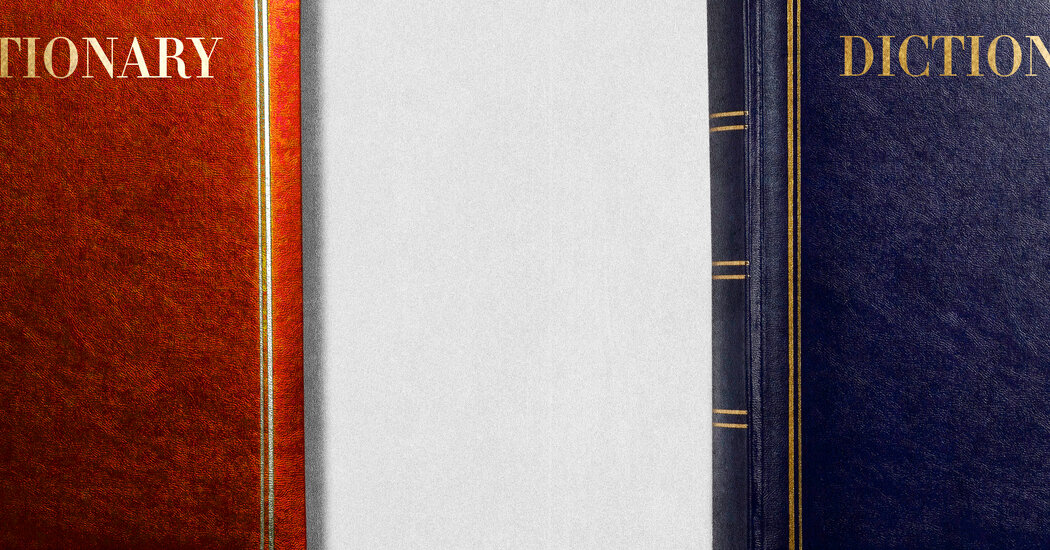 A dictionary for these polarized times.

President Biden campaigned on a promise to unify America. An inspiring goal, to be sure, but one that ain’t anywhere close to happening. Decades of polarization, turbocharged by the us-versus-them philosophy of former President Donald Trump, have left the nation so divided that it can feel as though the two political teams are not only talking past each other but speaking in entirely different tongues.

English is a living language, built to grow and evolve, but the red-blue political split is pushing its limits. There are increasingly fierce disagreements over what it means to be “canceled,” what constitutes “bipartisanship” — and don’t even try to figure out what counts as “infrastructure.”

At this point, each team could use its own dictionary, with contested terms defined according to that side’s worldview. Think of it like a French-to-English dictionary, only angrier.

Some terms cry out for translation more than others:

Bipartisanship. This seems straightforward enough. If both political parties support a proposal, it’s bipartisan, right? Not so fast. There has been much debate of late about which team members count. If a majority of Republican voters and a majority of Democratic voters favor a bill, does that make it bipartisan? Democrats, and especially the Biden White House, say yes. Or is an idea only bipartisan if lawmakers from both parties sign on? Republicans in Congress appear to support this narrower interpretation.

Voting reform. Both parties agree on the need to shore up the integrity of the electoral system. But, for Democrats, voting reform means making ballot access easier and encouraging maximum participation. Republicans want to go in the opposite direction, with measures that risk hitting minority voters especially hard. As a piece in the conservative National Review asked this week, “Why Not Fewer Voters?”

Infrastructure. This may be the hottest linguistic battle now raging, spurred by the sprawling, multitrillion-dollar proposal from the White House. As the president and his people define it, infrastructure includes everything from the “care economy,” community colleges and electric vehicles to job training and investment in domestic manufacturing and scientific research. If you can dream it, Democrats want to count it as infrastructure. (Having fun with this sprawl, the Twitterverse has been offering its definition-expanding thoughts, such as “Firing Fauci is infrastructure” and “Prosecuting Matt Gaetz is infrastructure.”)

Republicans are pushing a more traditional definition, limited largely to physical, transportation-related structures such as roads, bridges and ports. Mr. Trump’s last director of the Office of Management and Budget, Russell Vought, has claimed that only 5 to 7 percent of Mr. Biden’s plan goes toward “real infrastructure.” By his definition, even basics such as railways and water systems do not qualify. More generous Republicans put the number at 30 percent.

Complicating matters, Republicans pre-Biden embraced a broader definition of infrastructure that included some of the elements, including broadband, that many of them are now dismissing.

Covid-19 relief. During the debate over this year’s $1.9 trillion American Rescue Plan Act, Democrats began with a maximalist definition that included an increase of the federal minimum wage to $15 an hour. This was soon jettisoned.

Republicans — surprise! — took a stricter line, excluding measures such as direct aid to state and local governments. House Republicans tweeted out a pie chart that categorized only 8 percent of the bill as aimed at “crushing” Covid-19 — a figure limited to direct health spending — while 27 percent was labeled “State and Local bailouts.” “Stop calling it a ‘Covid relief’ bill,” the House Republican leader Kevin McCarthy grumped on Twitter.

Fake news. Pre-Trump, most folks thought of fake news as media sources that trafficked in lies, conspiracy theories and other disinformation. (See: Infowars.) Mr. Trump changed the definition to mean the reporting of any information he didn’t like. Plenty of Republicans seem happy to stick with that position as it suits their needs.

Cancel culture. This is a touchy one. Generically speaking, canceling involves ostracizing someone who has done something deemed beyond the pale. Progressives have been accused of overreaching in this department, especially on social media. Thus the rise of the derogatory term “cancel culture.”

In practice, Republicans have learned that complaining about “cancel culture” serves their overarching narrative of victimhood and whips up their base — the result being that pretty much every time someone is mean to them they claim they’re being unfairly canceled. Conversely, some Republicans aim to dismiss even serious infractions — like, say, Representative Marjorie Taylor Greene’s past endorsement of murdering Democratic leaders — as a liberal plot to cancel conservatives.

Political speech. The Senate Republican leader, Mitch McConnell, just opened a fresh front in this debate. He scolded corporations for criticizing the restrictive voting measures being pushed by Republican-led state legislatures and advised companies to stay out of politics. Mr. McConnell stressed, however, that he was “not talking about political contributions.”

So, campaign cash qualifies as a Republican-approved form of political speech. Actual speech, not so much.

Crisis. Many Americans, and pretty much all Republicans, see the record number of migrant children arriving at the southern border — a situation that has overwhelmed the nation’s broken immigration system and resulted in vulnerable young people being crammed into overcrowded facilities — as a crisis. But the Biden White House has expressly rejected the “C” word. The homeland security secretary, Alejandro Mayorkas, has suggested that terms such as “challenge” or “difficult situation” are more appropriate.

Terrorism. The Trump administration downplayed or ignored the threat of domestic extremists, even when its own law enforcement officials expressed concerns about white nationalism. Battling dangerous foreigners was Mr. Trump’s brand, and his White House stuck to it.

The Biden administration has made it clear that it will be keeping a close eye on homegrown extremists.

Riot. Most folks agree that riots are destructive displays of mob violence. But within that understanding lies much wiggle room. For instance, Democrats — and, really, most Americans with eyeballs — think that the Jan. 6 sacking of the U.S. Capitol, which left at least five people dead and well over 100 injured, reached the level of a riot. But for a special segment of Republicans, including Senator Ron Johnson, the attack did not present any real danger. Why? Because, as Mr. Johnson explained, it was conducted by MAGA patriots rather than antifa or Black Lives Matter protesters. This is in keeping with the position of Mr. Trump, who has said the situation posed “zero threat.” Fox News’s Tucker Carlson is promoting a similar line. Mr. Johnson also has explicitly rejected calling the events of Jan. 6 an “armed insurrection.” But that is a dictionary entry for another day.