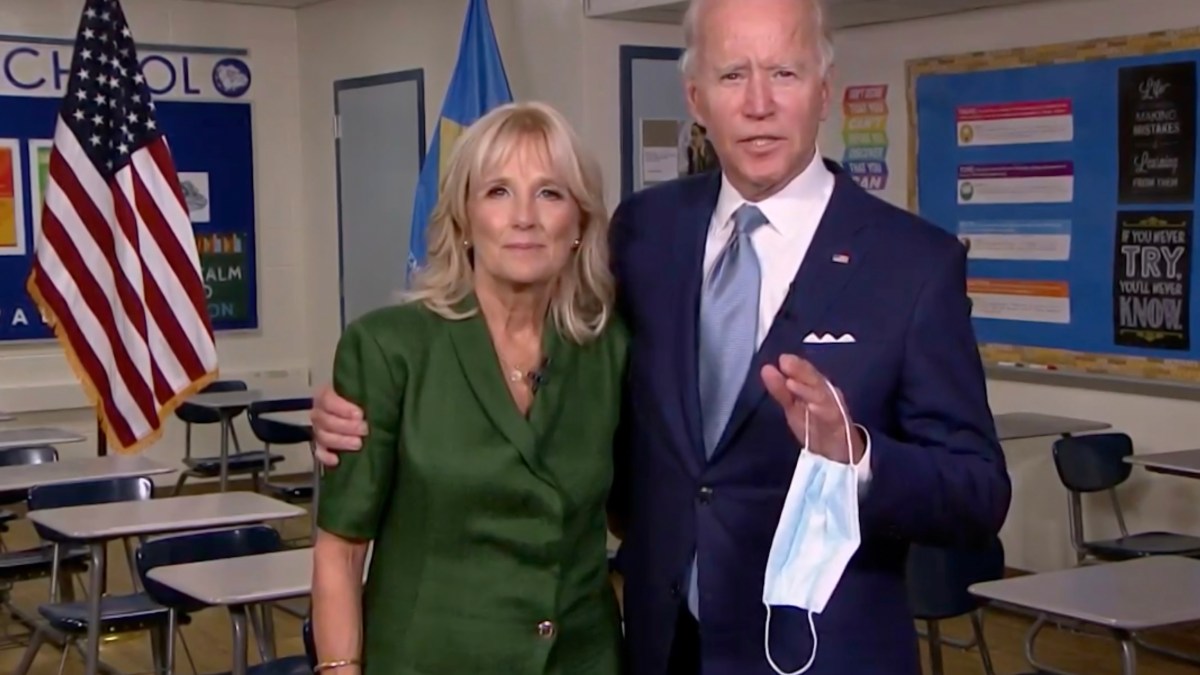 Democrats formally nominated Joe Biden as their 2020 presidential nominee Tuesday night, as party officials and activists from across the nation gave the former vice president their overwhelming support during his party’s all-virtual national convention.

The moment marked a political high point for Biden, who had sought the presidency twice before and is now cemented as the embodiment of Democrats’ desperate desire to defeat President Donald Trump this fall.

The roll call of convention delegates formalized what has been clear for months since Biden took the lead in the primary elections’ chase for the nomination. It came as he worked to demonstrate the breadth of his coalition for a second consecutive night, this time blending support from his party’s elders and fresher faces to make the case that he has the experience and energy to repair chaos that Trump has created at home and abroad.

“Donald Trump says we’re leading the world. Well, we are the only major industrial economy to have its unemployment rate triple,” Clinton said. “At a time like this, the Oval Office should be a command center. Instead, it’s a storm center. There’s only chaos.”

Tuesday’s speaking program underscored Biden’s challenge as he seeks to inspire a new generation of voters. While the Democratic leaders of yesteryear can point to experience and achievement, many of them are aging white men.

Just 77 days before the election, Biden has neither history nor enthusiasm on his side.

Just one incumbent president has been defeated in the last four decades. And Biden’s supporters consistently report that they’re motivated more by opposition to Trump than excitement about Biden, a 77-year-old lifelong politician. That deficit could hurt turnout among less consistent voters, particularly minorities and younger voters, whom Biden needs to show up in great numbers this fall.

Biden formally captured his party’s presidential nomination Tuesday night after being nominated by three people, including two Delaware lawmakers and 31-year-old African American security guard who became a viral sensation after blurting out “I love you” to Biden in a New York City elevator.

Delegates from across the country then pledged their support for Biden in a video montage that featured Democrats in places like Alabama’s Edmund Pettis Bridge, a beach in Hawaii and the headwaters of the Mississippi River.

Watch former Secretary of State John Kerry deliver his full address during the second night of the 2020 Democratic National Convention. Footage provided is a mixed feed and is a joint effort by the pool and the DNCC.

In the opening of the convention’s second night, a collection of younger Democrats, including former Georgia lawmaker Stacey Abrams and New York Rep. Alexandria Ocasio-Cortez, were given a few minutes to shine. But overall, there was little room on Tuesday’s program for the younger stars of the party’s far-left wing.

“In a democracy, we do not elect saviors. We cast our ballots for those who see our struggles and pledge to serve,” said Abrams, 46, who emerged as a national player during her unsuccessful bid for governor in 2018 and was among those considered to be Biden’s running mate.

She added: “Faced with a president of cowardice, Joe Biden is a man of proven courage.”

On a night that Biden was formally receiving his party’s presidential nomination, the convention was also introducing his wife, Jill Biden, to the nation as the prospective first lady.

Biden is fighting unprecedented logistical challenges to deliver his message during an all-virtual convention this week as the coronavirus epidemic continues to claim hundreds of American lives each day and wreaks havoc on the economy.

Watch Dr. Jill Biden, wife of Democratic presidential candidate Joe Biden, deliver her full address during the second night of the 2020 Democratic National Convention. Footage provided is a mixed feed and is a joint effort by the pool and the DNCC.

The former vice president was becoming his party’s nominee as a prerecorded roll call vote from delegates in all 50 states airs, and the four-day convention will culminate on Thursday when he accepts that nomination inside a mostly empty Delaware convention hall. His running mate, California Sen. Kamala Harris, will become the first woman of color to accept a major party’s vice presidential nomination on Wednesday.

Until then, Biden is presenting what he sees as the best of his sprawling coalition to the American electorate in a format unlike any other in history. There is no live audience for any of the speakers, who have so far delivered their remarks standing or seated alone in mostly prerecorded videos.

For a second night, the Democrats featured Republicans.

Powell, who served as secretary of state under George W. Bush and appeared at multiple Republican conventions in years past, was endorsing the Democratic candidate. In a video released ahead of his speech, he said, “Our country needs a commander in chief who takes care of our troops in the same way he would his own family. For Joe Biden, that doesn’t need teaching.”

Powell joins the widow of the late Arizona Sen. John McCain, Cindy McCain, who was expected to stop short of a formal endorsement but talk about the mutual respect and friendship her husband and Biden shared.

While there have been individual members of the opposing party featured at presidential conventions before, a half dozen Republicans, including the former two-term governor of Ohio, have now spoken for Democrat Biden.

No one on the program Tuesday night has a stronger connection to the Democratic nominee than his wife, Jill Biden, a longtime teacher, was speaking from her former classroom at Brandywine High School near the family home in Wilmington, Delaware.

“You can hear the anxiety that echoes down empty hallways. There’s no scent of new notebooks or freshly waxed floors,” she said of the school in excerpts of her speech before turning to the nation’s challenges at home. “How do you make a broken family whole? The same way you make a nation whole. With love and understanding—and with small acts of compassion. With bravery. With unwavering faith.”

The Democrats’ party elders played a prominent role throughout the night.

Clinton, who turns 74 on Tuesday, hasn’t held office in two decades. Kerry, 76, was the Democratic presidential nominee back in 2004 when the youngest voters this fall were still in diapers. And Carter is 95 years old.

Watch former President Bill Clinton deliver his full address during the second night of the 2020 Democratic National Convention. Footage provided is a mixed feed and is a joint effort by the pool and the DNCC.

Biden’s team did not give the night’s coveted keynote address to a single fresh face, preferring instead to pack the slot with more than a dozen Democrats in their 20s, 30s and 40s. The younger leaders included Abrams, Rep. Conor Lamb., D-Pa., and the president of the Navajo Nation Jonathan Nez.

Clinton, a fixture of Democratic conventions for nearly three decades, addressed voters for roughly five minutes in a speech recorded at his home in Chappaqua, New York.

In addition to railing against Trump’s leadership, Clinton calls Biden “a go-to-work president.” Biden, Clinton continued, is “a man with a mission: to take responsibility, not shift the blame; concentrate, not distract; unite, not divide.”

It remains to be seen whether the unconventional convention will give Biden the momentum he’s looking for.

Preliminary estimates show that television viewership for the first night of the virtual convention was down compared with the opening of Hillary Clinton’s onsite nominating party four years ago.

“We are producing a digital convention, and people are watching,” Biden spokesman T.J. Ducklo tweeted.

Meanwhile, Trump continued to court battleground voters in an effort to distract from Biden’s convention. Appearing in Arizona near the Mexican border earlier in the day, the Republican president claimed a Biden presidency would trigger “a flood of illegal immigration like the world has never seen.”

Such divisive rhetoric, which is not supported by Biden’s positions, has become a hallmark of Trump’s presidency, which has inflamed tensions at home and alienated longstanding allies around the world.

Watch the top moments from the first night of the 2020 Democratic National Convention.

Kerry said in an excerpt of his remarks, “Joe understands that none of the issues of this world — not nuclear weapons, not the challenge of building back better after COVID, not terrorism and certainly not the climate crisis — none can be resolved without bringing nations together.”