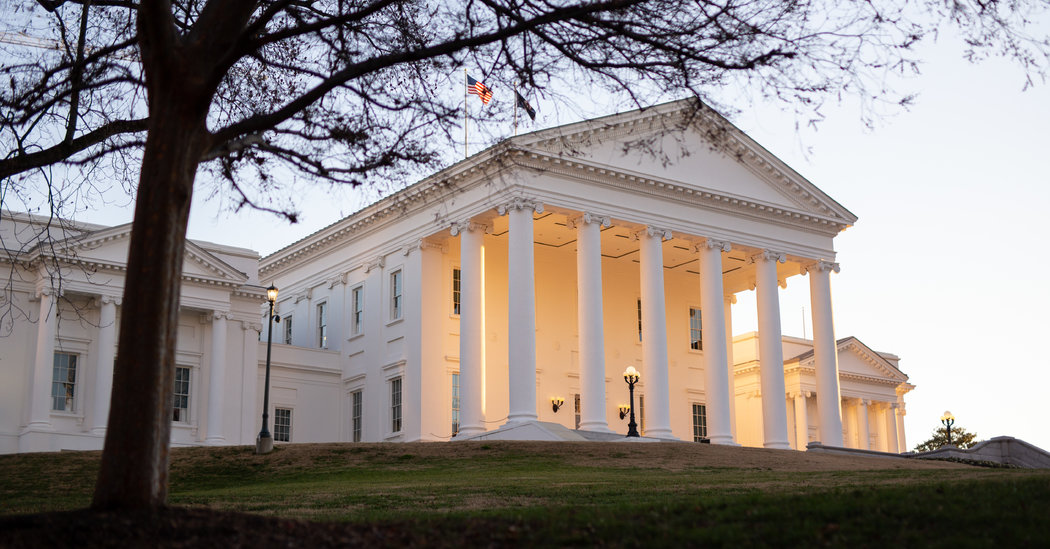 Virginia Democrats, who hold full control of state government for the first time in a generation, want to ban assault-style rifles. They want to get rid of statues honoring Confederate leaders in dozens of Virginia cities. They intend to give undocumented people licenses to drive.

And they want to do it all in the next 60 days.

As legislators around the nation return to state capitals this month for a new season of lawmaking, they are expected to veer in starkly partisan directions — to the left and to the right. With only a single legislature, in Minnesota, under divided control, most states seem certain to keep up a pattern of adopting sharply conservative policies when held by Republicans and deeply liberal ones when run by Democrats.

Republicans dominate most state legislatures, effectively running the chambers in 30 states. In some, including Ohio and Tennessee, Republican leaders are expected to push this session toward new limits on abortion. In Oklahoma and Kansas, they want to expand gun rights by allowing people to keep firearms even if a court has deemed those individuals potentially dangerous.

But in recent years, Democrats have begun to make up ground. Buoyed by the unpopularity of President Trump in Democratic-leaning states, the party over the last three years has won more than 400 state lawmaking seats that had been held by Republicans and have taken control of both legislative chambers and the governor’s offices in Colorado, New York, New Mexico and Illinois.

After flipping eight legislative chambers since 2018, Democrats now hold both chambers in 19 states, including Virginia. The result has been a wave of legislation to expand voting access, add anti-discrimination rules and bolster protections for abortion rights.

In Virginia, where Democrats won control of the General Assembly in November, lawmakers are rushing to shift the state’s course as quickly as possible.

“This is really a once-in-a-lifetime moment for us,” said Terry McAuliffe, a former Democratic governor of Virginia who campaigned for many of the newly elected Democrats. “We’ve been working on this for 25 years, and voters are desperate for Democrats to lead. For us, it’s do something or risk getting sent home in two years.”

But control also carries political risk. There are concerns in Virginia that Democrats are in danger of moving too fast, setting off internal divisions on issues like gun control, which Democrats representing areas with many hunters might be reluctant to support in an important presidential election year.

“We have a split caucus,” said Joshua Cole, a Democrat elected in November to the House of Delegates from Northern Virginia, who describes himself as a progressive. “We have old-school Democrats, moderate Democrats who represent moderate areas, and then you have progressives. You are going to see bills that are very aggressive, but the question is whether they make it out of committee.”

Democrats may find that control of state government does not always translate into overwhelming legislative success, political analysts said.

“In most places, having Democratic unified control is not carte blanche to enact a progressive policy agenda,” said Sarah F. Anzia, a political scientist at the University of California, Berkeley. “Winning and keeping those majorities requires catering to more moderate Democrats.”

In Maine, moderate Democrats joined Republicans to block a “red flag” firearms bill that would have allowed relatives to petition courts to confiscate firearms from residents if a judge determined they were a risk to themselves or to others. Instead, a compromise was approved that generally requires a medical professional to assess mental stability and make that determination.

In Oregon, where Democrats control both legislative chambers and the governor’s office, the party won approval for a statewide rent control law but failed to push through a bill that would have significantly decreased the amount of greenhouse gases that businesses were legally allowed to emit. Republicans blocked the bill by suddenly leaving the state so they would not be forced to vote.

And in New Mexico, also controlled by Democrats, conservative-leaning Democrats and Republicans in the legislature prevented the repeal of a law that would prohibit abortion in the state if Roe v. Wade is struck down by the Supreme Court.

Along with the 2020 presidential race, upcoming state legislative elections are viewed as critical because the winners in most states will get to draw once-a-decade maps, setting district boundaries for state and congressional elections after a new census count.

Republicans dominated 2010 legislative races, and the party used the redistricting process to give itself a competitive edge by drawing political boundaries favorable to Republican candidates.

But in Virginia, courts ruled that some of the state’s political maps had been racially gerrymandered, meaning that too many African-American voters were placed into the same districts, diminishing their voting power. Those maps were thrown out before the 2019 election, and new political boundary lines helped Democrats take seats previously held by Republicans.

In Richmond, the General Assembly, which is scheduled to start meeting Wednesday, is expected to first consider bills that have been blocked by Republicans for years, including legislation that would expand access to abortion and voting, a ban on housing discrimination based on sexual orientation, background checks for gun owners and an increase in the minimum wage.

Virginia Democrats also say they will push for ratification of an amendment to the United States Constitution granting women equal rights. If passed, Virginia would become the 38th — and final — state required for adoption of the Equal Rights Amendment, a proposal fought over decades ago. Many questions remain, though, about what would happen if Virginia ratified the amendment, because Congress set a 1982 deadline for states to adopt it.

Republicans have denounced some of the Democrats’ proposals, but they acknowledge that there may be little they can do to block them. Democrats have a 55-45 advantage in the House and a 21-19 edge in the State Senate.

The political trifecta in Virginia — a Democrat, Ralph Northam, is the governor — makes it the first Southern state where Democrats have become the dominant power since President Trump took office.

“House Republicans will work with our Democratic colleagues where we can and serve as a contrast when we must,” Todd Gilbert, the incoming minority leader for Republicans in the House of Delegates, said in a statement.

Other Republicans said they plan a more assertive resistance.

Amanda Chase, a Republican state senator who carries a sidearm to legislative sessions, has announced that she will not caucus with other Republicans in the upcoming session.

Ms. Chase, who will remain a Republican, said last fall that she intended to do whatever she could to thwart Democratic bills.

“The laws and restrictions that the other side of the aisle want to put forward are going to do nothing more than hurt law-abiding citizens,” she said. “We will do everything in our ability to challenge those thoughts and ideals.”

Even before the new class of legislators has been sworn in, dozens of cities and counties in Republican-dominated rural areas have responded to the Democratic takeover by declaring themselves Second Amendment sanctuaries. Under that designation, local officials say they will refuse to enforce gun restrictions if the General Assembly approves them.

Scott Surovell, a Democratic state senator and vice chairman of the Senate Democratic Caucus, warned that the coming session is likely to lay bare disagreements among Democrats, as well.