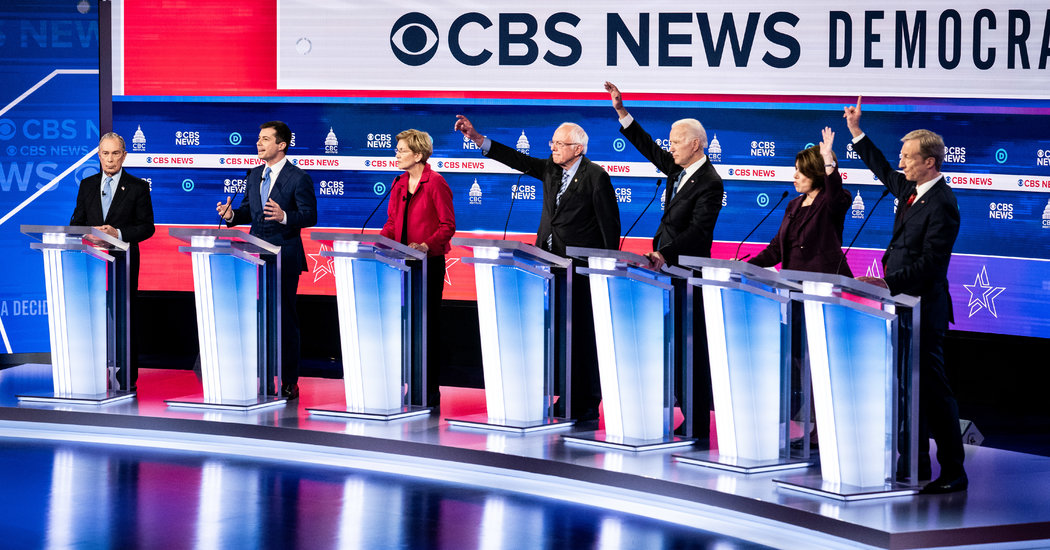 It’s been a week of viruses and vitriol, jittery markets and even more jittery Democrats. Panic is in the air. Things are spinning out of control. The center cannot hold because there is no center in 2020.

But urgency is good. It focuses the mind. A corrupt, ignorant and inept president who has yet to face a crisis finally has something — the coronavirus, which has the outside potential to do to the human race what climate change may do to the planet — that he can’t demagogue away.

The need to replace him has never been greater. And yet, the Democratic field is badly flawed: four septuagenarians; a sensible man who looks too young to shave; two people who should have left the race weeks ago.

One must emerge in time to save the republic. And so, on to the necessary elimination. We will soon be entering a short span of time that could change the world. Here are some things that have to happen now:

Get out! It’s the title of a great horror movie. But also a necessary public service that should be performed immediately by Amy Klobuchar, Pete Buttigieg, Tom Steyer, Mike Bloomberg and perhaps Elizabeth Warren.

Roughly one-third of Democrats will be voting on Super Tuesday, and the best that any of those candidates can realistically hope for is that two of them will win their home states.

Warren may not even carry Massachusetts. She hasn’t worn well, nor shown any strategic smarts. Yes, she took down Bloomberg, a paper tiger whose billions cannot buy him a joke writer, a man shown to be both insufferably paternalistic and ungracefully imperious.

In Tuesday’s debate, she continued to fillet him. But that fish had already been fried. She spent her considerable powers to annoy on a man who has zero delegates. She seems — how to say this? — gutless to take on the one person squatting in her lane. Either make the strongest case against Bernie Sanders or get out.

Politician, heed thy advice: Be gone now for the good of two-thirds of Democrats who have yet to warm to Sanders. The likable Klobuchar would make a great vice president; having her on the ticket is one way to sway the three swing states that could earn her the job.

Mayor Pete is a delight — intelligent, quick on his feet, a man of faith but also a man married to another man, and as such, a groundbreaker. Give him four years and some gray hair and he’ll be ready for the show.

Buttigieg will not win a state on Super Tuesday — not even close — and should give up the dream of 2020 as soon as possible. But thanks for that line on Tuesday about a general election race between a man stuck in the social mores of the 1950s and another man frozen in the revolutionary politics of the ’60s.

The pair of billionaires, Steyer and Bloomberg, are vanity candidates who should look in the mirror of reality. They can do the country an enormous favor by spending zillions in the general election, helping along those who are still blind to the fraud of Donald Trump.

If most of the above candidates don’t leave the race now, we could have a situation on Tuesday where Sanders wins, say, 30 percent of the vote in California, but no other candidate gets any pledged delegates. The threshold is 15 percent of the statewide vote. So, two-thirds of Democrats could vote for someone other than Sanders, and he would be the only one with something to show for it. That’s insane.

Now, to the chase: Joe Biden vs. Bernie, back where it started. Sigh. “I’m not going to be quiet anymore!” said Biden, trying on his alpha male. Actually, he doesn’t have to shout like red-faced Bernie to prove he has a pulse.

Sanders’s dogmatic inflexibility is also his strength with the kids — He’s so authentic! Donald Trump makes Bernie viable. In an era of chaos, why not vote for a grumpy ideologue with a heart condition who sees the world as a class struggle.

You should be careful making political predictions in our perilous era, but there is one I can make with assurance: Four more years of Trump would be catastrophic. Look what’s he’s already done — attacking Supreme Court justices, trying to interfere with the rule of law, ousting good public servants to get revenge — since impeachment.

A president who tried to create an ex post facto hurricane forecast with a Sharpie now tells us to trust him on the coronavirus. His concern is self-survival, not public health. He was livid after his own top epidemiologists warned that the virus would soon be spreading within our borders.

Keep the respiratory mask handy, and hope the Democrats can find a vaccine for self-destruction.