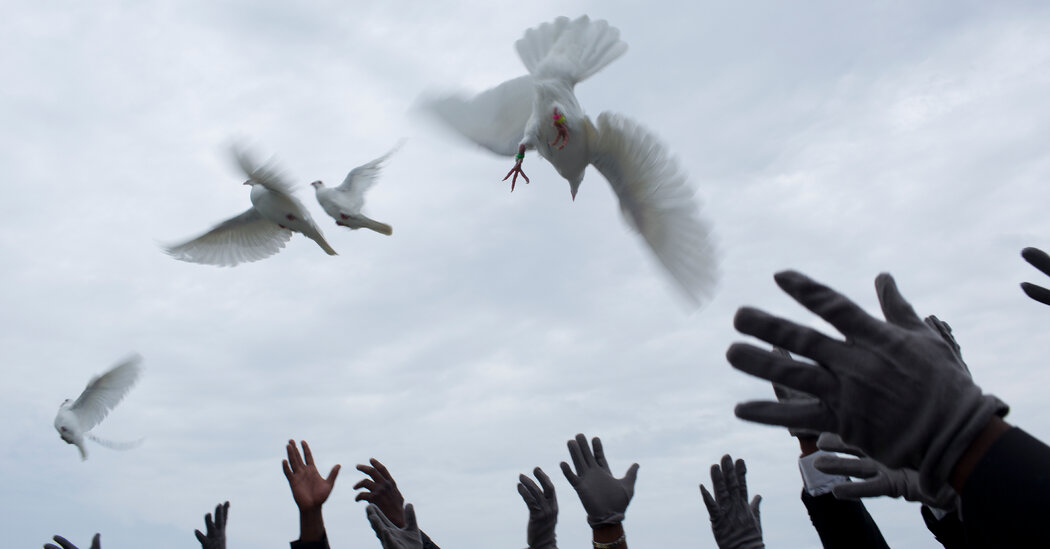 The words of the Rev. Anthony Thompson in 2015 were all but unthinkable to many Americans, after the ghastly crime that led to his proclamation. “I would just like him to know,” Mr. Thompson said, “I forgive you, and my family forgives you.”

His wife, Myra Thompson, was one of nine Black worshipers gunned down in Charleston, S.C., at the historic Emanuel African Methodist Episcopal Church by a white supremacist, Dylann Roof. Two days after the murders, at Mr. Roof’s bond hearing, Mr. Thompson and several other surviving members of the victims’ families offered their forgiveness. The effect was extraordinary: This act of grace eclipsed Mr. Roof’s delusional hope for a race war that he meant to ignite with the killings.

The unmerited forgiveness was a powerful gesture in a process known as restorative justice — the act of seeking accountability from wrongdoers, elevating truth and understanding over punishment and vengeance and allowing the victims to act as forces of morality by practicing acceptance, absolution and mercy.

I remembered Mr. Thompson’s words after Sunday’s news of the death of Archbishop Desmond Tutu, the legendary South African freedom fighter. Like those Black families, he held fast to the politics of forgiveness and the irresistible moral appeal of genuine reconciliation. Yet with each passing year, his credo seems to grow out of step with contemporary social movements that are often fueled by retribution, as opposed to restorative justice. It is the kind of justice that seeks to bridge the gap between humanity and cruelty. It is the kind of justice that aims to bring offending people back into the fold of community by trying to restore some sense of ethical connection and moral belonging.

If Archbishop Tutu’s theological genius and philosophical insight are to endure, we must find the foresight and courage to revive his moral passion for restorative justice, which may be our most sustainable model of social change.

Restorative justice might seem quaint, hokey or downright irrelevant to many Americans, including most social justice advocates. Many Black Lives Matter activists rightly think that true justice must include the full measure of punishment for those who deserve it — for instance, cops who kill unarmed Black people without justification.

Mr. Roof’s crime deserved a serious punishment. Restorative justice doesn’t mean that he shouldn’t be severely disciplined, but his penalty should not be death; it should be life in prison. Restorative justice is not a substitute for retributive justice or just punishment; it is often a supplement to retributive justice to try to humanize punishment. The effort in Mr. Roof’s case, and those like him, is for reflection, restrictions and rules to lead to even slight transformation. The death penalty is the harshest and most unjust punishment to impose. While it may be exceedingly difficult to rehabilitate murderers, it is impossible to restore dead ones.

The same goes for Kim Potter, the former cop who, by most accounts, mistakenly killed Daunte Wright, a young Black man in Brooklyn Center, Minn. In her case, as with many police officers, restorative justice means encouraging them to grapple with the inherent injustice of many of the killings of Black people. The importance of restorative justice is that it acknowledges the structural features of systemic injustice, such as policing Black bodies, while encouraging white people to come to grips with their complicity in such practices. While Ms. Potter may also receive retributive justice and serve several years in prison, restorative justice in her case might include measures to educate her about the unjust and disproportionate deaths suffered by Black citizens. Such an education will not restore her to her job, but it can restore her to conscientious citizenship.

The question remains whether restorative justice will have an edifying effect on other police officers. Of course, there is no guarantee that such a thing will occur, but it is certain that the failure to try will produce more harm than good.

Contemporary activists can benefit from Archbishop Tutu’s ideas about restorative justice and strengthen their quest for fundamental fairness. The goal of restorative justice, he said, is “the healing of breaches, the redressing of imbalances, the restoration of broken relationships” and rehabilitating the victim and the perpetrator, with the latter “given the opportunity to be reintegrated into the community he has injured by his offense.” It’s not just about punishment.

And yet for some advocates of retributive justice, a wide array of circumstances warrant the greatest possible punishments these days.

Many Democratic officials thought that instead of remaining in office with a reprimand, Gov. Ralph Northam of Virginia should have resigned or been forced out of office over a blackface controversy decades earlier. He ended up receiving restorative justice more by default than conscious choice — he refused to heed calls to resign — and did a great deal of good for Black folk in his remaining years in office: He increased focus on racial justice, paying especially close attention to maternal mortality, equity in transportation and funding for historically Black colleges. He changed how schools teach the history of race, got a Robert E. Lee statue in Richmond removed and restored the voting rights of tens of thousands of felons, a sizable share of them Black.

By contrast, take the case of Amy Cooper, a white woman who falsely claimed to the police that an amateur bird-watcher, Chris Cooper, who is Black, had threatened her. After a public outcry, she was fired from her job. Although she received some form of restorative justice, an even better approach would have been her keeping her job while her employer demanded that she read and study more about race, Black masculinity, white privilege and social injustice. The loss of her job as an act of retributive justice left all these structural issues aside and merely shamed her without transforming her or using her circumstances to throw light on similar cases.

On the surface, the demands for retribution for Governor Northam and Ms. Cooper may sound like racial justice, but in truth, they thwart the forgiveness that offers both substantive and strategic advantages.

If racists are willing to admit their wrong and do the work, the community is made stronger by their literal or symbolic return. Punishment may feel cathartic to those harmed by a wrong action, but it may not achieve real justice. The moral intent of restoration is to create a flourishing community that acknowledges the wrong done, holds wrongdoers accountable and invites them back into the community from which their offense estranged them. Thus, Black activists may gain an ally in the effort to combat racism. If white people forgiven their errors are welcomed back, the burden on Black people is by that measure lessened.

Archbishop Tutu was keen on white and Black folk getting along as justly and truthfully as possible. Contemporary movements are understandably eager to expose and confront the ugly truth of racism, whether it is the lie that critical race theory is being taught in elementary schools or the myth that Confederate monuments are more about Southern honor than Black contempt.

In our culture, reconciliation is often impossible because one side is hellbent on proving that it is right and the other side wrong. Archbishop Tutu’s vibrant sense of restorative justice might help Americans grapple with two problems in society today: the soul-destroying focus on punishing others, including the overincarceration of people of color, and the temptation to wipe out enemies through the means of cancel culture. Cancel culture fails to acknowledge nuance and complexity and nullifies the notion of a spectrum of ills, caught instead in rigid binaries and vicious absolutes.

Fortunately, there is growing disgust about such absolutist, reactionary measures committed by both the left and the right. The desire to right racial wrongs should be loudly applauded. The failure to make distinctions between degrees of racial offense should be roundly criticized.

Advocates of restorative justice are suspicious of the self-righteousness that can fuel cancel culture. They want to encourage the forgiveness that is a redemptive route to moral restoration. Forgiveness is not a weak ethical response to grave dangers. It is a calculated effort to ward off moral harm by anticipating the destructive impact of unforgiving attitudes, behaviors and actions.

When people claim the political utility of forgiveness, they help stabilize a culture addicted to the satisfaction of petty vengeance, establishing in its stead a measure of justice supported by big-picture moral values and social visions.

“Thus,” Archbishop Tutu argued, “to forgive is indeed the best form of self-interest, since anger, resentment and revenge” undermine the common good. South African leaders borrowed from Black American kin in their fight against apartheid. Nelson Mandela promoted armed resistance against murderous white rule, while Archbishop Tutu advocated nonviolent resistance against white supremacy. As the head of South Africa’s Truth and Reconciliation Commission, Archbishop Tutu believed that the only way to achieve a thriving democracy was for its citizens to come clean about their sins. He argued that Black forgiveness would remake South African society and pave the way for true justice.

At their best, Black freedom struggles intensify the virtues of American democracy and lend invaluable support to the search for justice. Amid white violence and Black bloodshed — forces we still face — Archbishop Tutu, like Martin Luther King Jr. before him, reminded us of a lesson we should never forget: that forgiveness and reconciliation are the foundation of a vibrant social movement and a healthy democracy. As King argued, the lex talionis — the law of retributive justice described as an “eye for an eye” in the Book of Exodus — is ultimately unsatisfying and harmful. “The old law of an eye for an eye leaves everybody blind,” King wrote.

With King and Archbishop Tutu as our guides, we can reclaim moral ground and preserve our humanity while achieving the highest form of justice possible. Archbishop Tutu sweetly reverses the usual hierarchy of the West over Africa in colonial thinking when he argues for a conception of justice rooted in his beloved motherland. “Retributive justice is largely Western. The African understanding is far more restorative — not so much to punish,” he said, “as to redress or restore a balance that has been knocked askew.”

Michael Eric Dyson (@MichaelEDyson), an ordained Baptist minister, is a distinguished university professor of African American studies at Vanderbilt and the author of “Entertaining Race: Performing Blackness in America.”